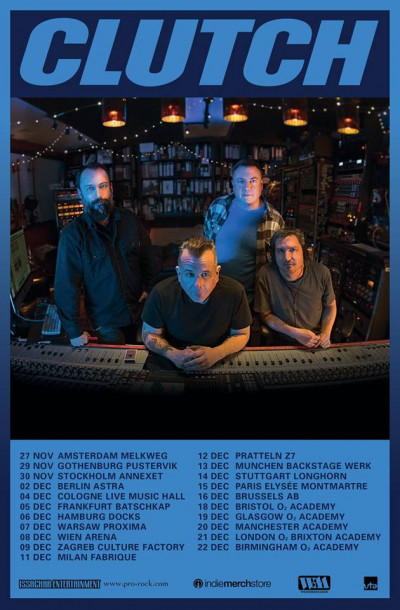 Even after 28 years, releasing many fine albums and building up a fearsome live reputation, while in conjunction expanding their loyal fan base, they are still the smarter rock fan’s best kept secret. Although there are signs the rock mainstream might be, at long last, waking up and realising how great Clutch indeed are. From their sold-out Roundhouse show in 2016, they now play the larger Brixton Academy (they did play there in 2015 but as a venue replacement when Shepherds Bush Empire had to be closed due to structural damage) and while not officially sold out, it most certainly looks and feels like it for what turns out to be an exuberant rocking masterclass of a party-vibe knees-up.

Creatively, this year’s release of their twelfth album Book of Bad Decisions has met further critical acclaim and could arguably be one of their best to date. They are having one incredibly long peak. With the current album’s cover as a backdrop it is no surprise they pluck five songs from it, and why wouldn’t you when it is packed full of many soon-to-be Clutch classics. Continuing their long-held trend of delivering a different set each night, it is still remarkably striking just how strong their repertoire is. Then, equally admirable, is the list of those songs which are saved for another night.

Here they are greeted with a loud and passionate response as they open with ‘HB in control’ from Book of Bad Decisions. It speaks Motörhead-sized volume that throughout the show the new songs are greeted with the same howls of appreciation as their older, more established cherished songs. In the case of ‘In walks Barbarella’ and the set closer ‘How to shake hands’, they are both instant classics, to be pencilled in beside other essential Clutch playlist selections aired tonight; ‘The Regulator’, ‘Electric Worry’, ‘Pure Rock Fury’, ‘X-Ray Visions’, and the explosive ‘Earth Rocker’. Whichever Clutch era a song is plucked from, the mind-blowing constant is how high they set the bar for a rockin’, danceable groove. Yes, a rock band who really know how to groove. The band members’ eclectic musical tastes – Sixties Soul, Seventies Funk, Hip Hop, and Classic Rock – somehow forms into the unique Clutch sound.

The rhythm section of Jean-Paul Gastor (drums) and Dan Maines (bass) deserve a very special mention. Wherever you looked around the venue, it was one enormous sea of constant movement, from traditional denim and leather-clad rockers head banging, to those dancing on the wings looking like they were at a rave. The grooves they conjure are astounding.

While the band can deceivingly look like computer nerds dressed in slacker clothes chilling at home, individually and collectively they rock hard. Guitarist Tim Sult is all one-tracked concentration as he picks out mighty riff after mighty riff. Then there is Neil Fallon, who commands the stage like a cross between a fire-and-brimstone preacher and a raging Brian Blessed leading his troops into battle. He works even harder tonight: “this a big stage!” he quips. But what a great rock frontman he is, just a slight lift of a hand he can provoke an even higher, enthusiastic reaction from the crowd. And don’t forget the voice he possesses. one which is as fitting to Hard Rock as Rob Halford’s tonsils are to Heavy Metal.

Clutch are hard grafters, ploughing their own path defying hipster and extreme metal trends, and judging by the amount of Clutch t-shirts on show tonight, are creating their very own cultdom, or should that be Clutchdom?  Soon, the question will move on from have you heard of Clutch to when did you get into them? On this performance, Clutch are arguably the best rock band currently out there, making great albums while absolutely smashing it live. No doubt in my mind, 2018’s rock band of the year. Clutch rule!