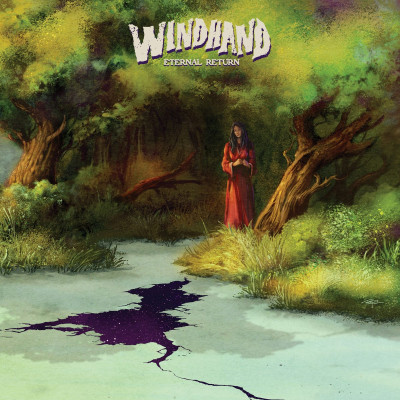 Richmond, Virginia’s heavy psychedelic doomsters Windhand return with their fourth album with producer Jack Endino (Nirvana, Soundgarden) also at the helm for a second occasion, but this time around come bearing a varied diversity of gifts. A band which have been accused of being a bit too one dimensional, ploughing on ruthlessly at the same plodding pace, sees them open-up to the idea of tempo variety, albeit slightly. Fear not, hardened Windhand fans, Eternal Return is no White Album sized explorations but attempts, and for the most part, accomplishes, in making 63 minutes spread across nine songs a considerably more palatable listening experience. They have broaden out their sound with grunge influences, while still maintaining psych flourishes, and of course, still possess an ingrained moody doomy weightiness.

This doomy low end fuzz of frequencies brings in some of grunge’s heavier moments; most notably Tad, The Melvins, early Soundgarden, and Nirvana’s quieter intense moments. While vocalist Dorthia Cottrell’s understated ethereal melodic croon, reflective lyrics and tone, contrasts the moodiness with an effective drifty haziness. And splendidly good that is too when they hit the right (low end) notes as on the earworm ‘Grey Garden’ and ‘Diablerie’.

From the album opener ‘Halcyon’ they showcase a sound which thumps and floats in equal measure. Splurging all this together is the rhythm section of Ryan Wolfe and Parker Chandler while fine examples of searing, swirling guitar solos manifest at the right moments by Garrett Morris, most notably on ‘Grey Garden’, ‘Red Cloud’ and ‘Diablerie’. The effects are infectiously night-dreamingly lysergic.

For a band which often draws associations with the doom genre, it is only with the ten minutes ‘Eyeshine’, which can be labelled as the album’s definitive doom track. And this is one for doom purists because it bangs the long drawn out slow nod tempo and power chord tradition for so long, for this reviewer, it outstays its welcome around the five minutes’ mark. But even one epic length of a song does not ruin the flow and feel of an album, especially when it’s a hefty one hour plus long experience.

What Windhand have achieved with Eternal Return is an entrance into their sound-world for those who couldn’t quite access their universe before. While, at the same time, this should also still appeal to their diehard fans. It reveals a band flexing out and evolving, and should only enhance their reputation in the underground scene even further. An album to immerse yourself in, and for this reviewer, spending a longer period-of time listening to Eternal Return than usual before reviewing, has reaped greater rewards (apologies though to the band and record label for taking so long).