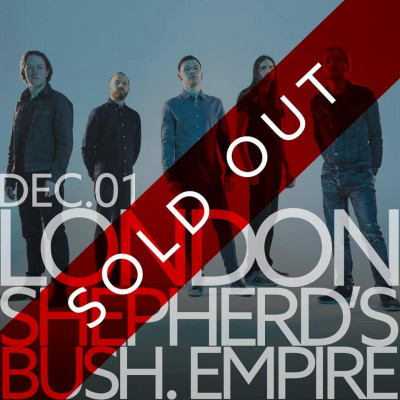 TesseracT on the web:
Website | Facebook |
Support: Between The Buried And Me| Plini
December 1, 2018 at Shepherd's Bush Empire
Promoter: Atom Splitter

The success and critical acclaim of TesseracT’s fourth studio album Sonder in April earlier this year, has cemented the Milton Keynes quintet’s deserved reputation as one of the seminal progressive metal bands of the modern era. As one of the bands most heavily associated with the djent movement, TesseracT have built themselves an incredibly dedicated following throughout the last decade in the progressive scene due to their innovativeness and musical proficiency. 2018’s Sonder also enhanced the band’s reputation outside of the UK, allowing them to embark on a world headline tour for the first time in their history. On a dark rainy night in London on the first day of December, TesseracT had the opportunity to further showcase precisely what makes them such rising stars; and also to headline a fine display of progressive metal through two support acts in Plini and Between the Buried and Me, who made for an incredibly appealing line-up to fans of the genre.

Australian-born composer and guitar virtuoso Plini opened proceedings, starting his set without any hint of an introduction and almost taking the already packed Shepherd’s Bush Empire by surprise . As it turned out though, the venue was not only busy so early due to people sheltering from the rain, but due to many of Plini’s fans making sure they got there in time to see him perform; and they did not let his sudden appearance onstage go unnoticed. The warm reception with which he (and, on this occasion, a backing band) received turned out to be fully merited. Despite a very static performance, it was impossible to take your eyes off the band as the sheer levels of musicianship on display left the audience completely transfixed. Plini and his fellow musical wizards do not put a foot (or rather, a finger) wrong throughout their thirty minutes on stage, and this is thankfully not lost on a highly appreciative crowd. There is also such an incredible sense of likeability towards Plini so that, on the rare occasions that he does address the London audience, I don’t suspect there is a single person there not thoroughly won over by the man (if, indeed, any winning over was needed in the first place).

Between the Buried and Me also emerge to an incredibly warm response from the crowd, which is perhaps unsurprising due to their prestige and longevity within the progressive metal scene. The levels of enthusiasm which greeted the North Carolinians were nevertheless at such a level that anyone who wandered in off the street could easily have been forgiven for thinking they were the headline act. ‘The Coma Machine’ in particular was greeted with a roar of recognition from the audience and marked a distinct change in reaction from the static appreciation of Plini, with heads moving and hair swinging all over the place. The first mosh pits started when the band entered heavier territory, though the range of styles and influences Between the Buried and Me cram into a single support set mean that none of these audience responses are that long-lasting. As with Plini, the musicianship is again clearly of an excellent quality, which I daresay is the minimum that could be expected of band with a reputation like theirs. However, unlike their predecessor, Between the Buried and Me suffer some sound issues that unfortunately hold their performance back. The drums are all too dominant in many sections and while this is not a consistent problem throughout, it always feels as though both the extremely heavy and deeply melodic sections never quite have the impact that they ought to.

Set-up with a minimalist stage and an incredibly short introduction, TesseracT take their place as the headliners responsible for the full capacity Shepherd’s Bush Empire. The low bass rumble into the crushing riff of their opening song ‘Luminary’ feels like the pin being pulled out of a grenade, as the show and the crowd bursts into an explosion of sound and energy. Any worries that the sound quality might affect TesseracT too are soon forgotten as they give a perfect rendition of the opening song from Sonder before unhesitatingly transitioning into ‘Of Mind – Nocturne’ off of 2013’s Altered State. Already two songs in, we were left in no doubt that all of TesseracT’s best qualities would be on display here, with the balance between brutal heaviness and lilting harmonies absolutely spot on. The energy that the performance brought on was the real sight to behold however, and this is taken up an even further notch when the band go into parts two and three of their ‘Concealing Fate’ saga from their debut album One. Here we are treated to an upping of the tempo, harsh screams and frontman Daniel Tompkins diving headlong into the crowd as the song kicks in. The live renditions of songs such as these show a side to TesseracT which can often be lost on record.

Tompkins’ presence and energy on stage is a stark contrast to the rest of his bandmates, who are essentially stationary throughout the set – focussing more on their musical synergy as opposed to putting on a show. The juxtaposition of these approaches creates a perfect balance between the music and the performance, the effect of which is aided fantastically by the light show that accompanies TesseracT on stage. Made up of a simple yet effective rig around the drumkit, the lights transform what might otherwise be a far less visually entertaining affair. As it was though, all elements of the show came together in a perfect blend of showmanship and one of the tightest musical performances anyone could hope for. Nowhere is this encapsulated more than with their new songs ‘Smile’ and ‘King’. Not only do these show that Sonder holds up very well in TesseracT’s discography, but they showcase everything that has allowed them to sell out the Shepherd’s Bush Empire (a fact which Tompkins triumphantly announced towards the end of the show). Powerful riffs, thunderous grooves and seamless switching between aggressiveness and melody are all thoroughly appreciated by the crowd, who make it clear by the end of the band’s final song that they do not want them to leave. It is easy to see why TesseracT have built up such a loyal following with performances like this. The professionalism and innovation that they have become known for are personified in tonight’s show, and the only downside was that they didn’t play for longer.