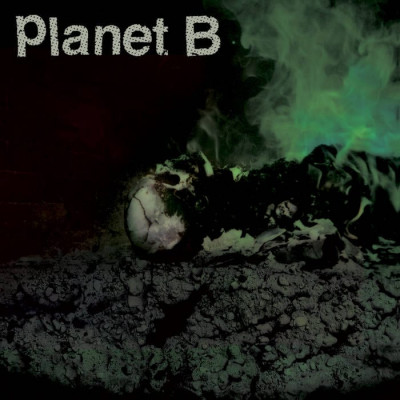 Planet B by Planet B

Ipecac Recordings is the home to Planet B, the name duo Justin Pearson (Dead Cross, Retox, The Locust) and Luke Henshaw (Sonido de la Frontera) have given to their project that creates “music both mischievous in sound and sobering in message”. It’s Ipecac’s involvement that drew me to give their debut album Planet B a whirl, along with the lead track from the album ‘Manure Farm’. Pearson and Henshaw had previously worked together on a remix and contributions to the soundtrack of Asia Argento’s film Incompresa. The PR for the album describes Planet B’s sound as “somewhere just out of reach of genre, with aesthetics rooted in hip hop, hardcore punk, turntablism, and 70s-80s horror movie soundtracks” which is pretty accurate and way better than anything I can muster. It also warns us that “no sound is beyond their experimental scope”, which you need to absorb before strapping yourself in.

The album also features a long list of musical luminaries such as Kool Keith, Nick Zinner and Martin Atkins (who I was aware of and whose music I enjoy). Then we also have Gabe Serbian (The Locust, Head Wound City), Sonny Kay (Year Future, creator of GSL Records) and Joseph Karam (The Locust), all of whom I have no prior knowledge. So now that I’ve established my (non) credentials I’ll endeavour to bring you my thoughts on this incredibly challenging album.

Let’s start with the album’s finest moment, the aforementioned ‘Manure Farm’ which rips along with a pulsating groove of heaving bass and bone crushing percussion. Pearson sounds like he is a man on the edge and when those whooping sirens kick in, the manic levels shoot through the roof. Likewise ‘Crustfund’ is a flurry of pumping beats, ground shaking bumping bass grooves and weirdo robo intonations. Kool Keith beams in another one of his unique cameo appearances. The only other track that I have any inclination of returning to is ‘Brutal Evolution’, a blast furnace of inventive beats and a mind bending bass groove, Pearson’s strained yelps mercifully buried in the mix.

As has been previously stated, Henshaw has masterfully put together some hugely inventive sounds for Pearson’s apocalyptic howls. But the issue I have is that these sounds are fucking relentless in their pursuit of frazzling your head. To try and digest this album in one sitting is akin to some form of aural torture and I’m mightily relieved I don’t need to do this again. By the time ‘Mirror, Mirror On The World’ hit my ears I started questioning the situation that I might ever actually enjoy such a foul mash-up of obscure beats and samples. Yes, the world is truly fucked up and this excruciating “creativity” certainly conveys just how fucked up.

Listen to the bizarrely named ‘(A) Not At All (B) Somewhat (C) Very Much’ and realise that the clockwork beats and backdrop comprised of hideous samples is something that Al Jourgensen would wince at. The disjointed beats and soundscapes of ‘Disease Control’ make for an ugly cacophony, Pearson showing exactly why he raps/shouts instead of singing. ‘Come Bogeyman’ (featuring Martin Atkins) is full of creepy keyboards and itchy beats, the “Come Bogeyman” chants are truly horrific. The punked up diatribe that constitutes ‘Join A Cult’ has a ferocity that Liam Howlett might try if he wasn’t a middle aged man.

Thankfully there are tracks like ‘Big Karma’ which are focussed enough to actually have structure and a groove that is less hysterical. Planet B find time to pay tribute to Depeche Mode with a bastardised cover of ‘Never Let Me Down Again’. You wouldn’t know it (save for the lyrics) until that headline keyboard hook is introduced, but it is transformed into something sickening and warped as opposed to the original’s sprightly bounce. The album’s parting shot is the nightmare inducing ‘The Beginning Is Near’. A kaleidoscope of clattering beats and flickering basslines that help absorb the stream of psychosis from Pearson as he hollers “The Beginning Is Near, now watch man disappear!”.

There is no doubting that Planet B contains some incredibly inventive soundscapes and beats. The intention to put together an album of disturbing music to provoke minds and stir up anger has certainly been fully executed. Unfortunately I found the album a chore to wade through as Pearson’s vocals, a cross between a full-on Ad-Rock ‘Sabotage’ shriek and Tom Araya’s high pitched howls plain drove me to distraction. It is also nigh on impossible to unravel what the fuck he is on about. If you are fan of the acts who participated in the making of Planet B, or indeed more knowledgeable than I about the outskirts of the Ipecac label, then you’re likely to find this album a thrill.