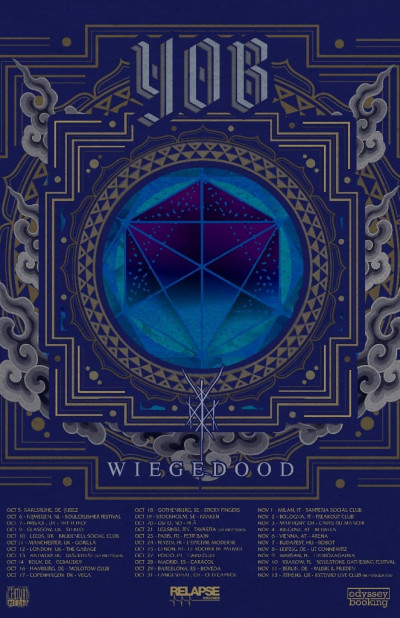 YOB at The Garage

CRACK! Wiegedood don’t mess around, straight into the finely-chiselled black metal onslaught of ‘Svanesang’. While they’re a band who make use of bleak rural imagery and are often associated with the expansive, atmospheric styles of ‘Cascadian’ black metal like Wolves In The Throne Room, Wiegedood sound tight and brutal tonight, complemented by the Garage’s excellent, detailed sound.

As a four-string-fiddler myself, it pains me to admit that you don’t miss the lack of bass in Wiegedood’s interlocking dual-guitar patterns, which achieve a well-rounded sonic crispness and clarity without losing depth. Their most characteristic feature is intricate flurries of lacerating dual-tremolo note-runs, briefly punctuated by huge battering chords. There’s something just the right side of clinical about the way Wiegedood play – achieving a precise, compressed heaviness that contrasts nicely with looser, jangly clean interludes. Just as you’re lulled into a false sense of security – CRACK! – the drummer jolts you out of contemplation with a huge snare/tom hit, such as at the start of ‘Ontzieling’: it’s like driving to the edge of a vertiginous abyss, only to have your head slammed in the car door and pushed off the edge.

(I shouldn’t be surprised by Wiegedood’s brutalism, in retrospect, given that their name is basically the Belgian word for cot death – a more mundane and realistic horror than the glib, Satanic darkness of many black metal bands.)

‘Cataract’ begins with the quietest clean section so far, extended a little from the recording, I think, with a second guitar-harmony providing melodic counterpoint – CRACK! again, a shockingly-abrupt blast to introduce the most expansive section yet: a scenic wash of sour post-rock over a mid-tempo 4/4 beat.

If we’re being picky, vocalist Levy Seynaeve’s black metal snarl may not be the most original in the sub-genre, yet it’s one of the most sincere. But I eat my words when he busts out some low drones for the finale of ‘Prowl’, reminiscent of Atilla mo)))aning at the Sunn, providing an added level of weirdness that makes the last few seconds a tortured fall into the abyss, before the final snare-crack of oblivion.

Wiegedood deliver a no-bullshit set of black metal, delivered with precision and perfection, which is punishing yet develops dramatic and immersive sonic vistas, brimming with emotion.

. . .and now for something largely, really rather different. Orange stacks wheeled on; whine of feedback; heavily tattooed arms raised into the air; huge, gleeful grin; massive, hungry applause. Mike Scheidt and co. have arrived and they don’t half seem pleased to be here.

Why the hell haven’t I seen YOB live before? They must have played Roadburn about two-hundred-and-seven times in the four years I’ve been going. I guess it’s because, while I listened to The Great Cessation (2008) and Our Raw Heart (2018) and found them pretty cool, I have to admit they hadn’t blown me away, something not quite clicking into place. Well that’s changed now. I mean damn YOB are heavy live, every bit as warmly weighty as other drone-doom monoliths like Electric Wizard (in their heyday), Bongripper or Conan – even Sleep. Heavy but controlled – wielding riffs like tree trunks, distortion allowed to accumulate, gathering mass and warmth, pushing roots out into the crowd.

Eight gigs into a 30+ date European tour promoting Our Raw Heart, YOB’s current set-list doesn’t lean heavily on that album, also covering The Great Cessation and the earlier works The Illusion of Motion (2004) and The Unreal Never Lived (2005). Well, I could have bailed for the tube after the sumptuous opening pair of tracks from Heart and left a convert: if the soaring, kaleidoscopic ‘Ablaze’ inspires great majesty and sorrow, then the churning grind of ‘The Screen’ re-establishes Earth as our base before firing us off into the heavens once again. And blimey Mike and co. throw themselves into it, filling the stage with energy and enthusiasm. For a man who has battled depression, a potentially fatal abdominal disease and a bout of MRSI, Mike looks great – positively beatific in fact, effortlessly the guitar hero, vocal wizard and manipulator of a pornography of pedals.

Quite a lot of people on the London metal scene can’t cope with quiet bits, but even the inevitable loud conversations from the back and cries of “Sssssh! Sssssh!” and “Listen you cunts!” in response can’t spoil the jangly off-kilter build-up in ‘The Lie That Is Sin’. The rhythm section kicking back in, however, soon drowns them out with rolling drums and a rich, woody bass tone. After this Mike gives a shout-out to the crowd, which I don’t fully catch, but the gist is enough: we value your support more than we can say, dedicating ‘Our Raw Heart’ itself to “those who helped us in a rough spot”.

And it’s truly a song that pumps out emotion like that knot of blood and muscle in your chest. It’s clear from the looks on people’s faces that this, the album’s closing track, is a highpoint of the evening for many, myself included. A warm and humongous ballad essentially, awash with flanger-drenched open chords and endlessly rising outpourings of feeling, the best part is actually what the band don’t play – a sudden pause, with breaths taken and held in, a massive silence filling the interior of the Garage like our lungs filling with air – then exhaled alongside Mike’s powerful ululation, building to a show-stopping crescendo.

Again, they could have comfortably left it there, but fortunately Mike jokes that “We’ve got time for two old songs – they’re shorter. . . ish!” Inadvertently continuing my metaphor YOB play ‘Grasping Air’, all woozy groove and harsh bellows, and the again fittingly-titled ‘Breathing From the Shallows’, a psych-doom monster led by tremulous unison bends…

. . .somewhere around this point I got a bit lost, not knowing if my eyes were open or closed for the last few moments – most people’s seemed closed – before we’re roused back from some inner, liminal place by a strikingly-neoclassical end-solo section, achieving the final sonic transcendence of the evening.

Tonight’s paring was a little odd on paper, but ultimately the differences between the two bands allow for a sense of contrast that brings their mutual strengths to the forefront. If Wiegedood hammered home an utterly-unvarnished sense of the bleakness and harshness of existence then Yob, alongside Om, Pallbearer and the like, concentrate on conveying a genuine sense of warmth, beauty and euphoria that is beyond piousness or pretension, and which stays with you way beyond the tube ride home.