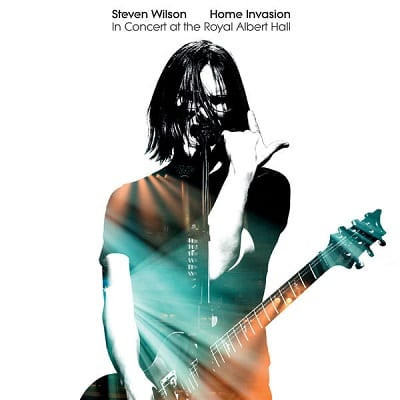 Home Invasion: In Concert at the Royal Albert Hall by Steven Wilson

This 2-CD/Blu-Ray set consists of Steven Wilson’s amazing performance at the Royal Albert Hall on the final night of his three sold out shows he did back in March of this year. Steven has been around from day one. As one of the founders of Porcupine Tree, collaborating with artists such as Tim Bowness, Aviv Geffen and Opeth’s Mikael Akerfeldt from No-Man, Blackfield, and Storm Corrosion.

He’s also done some incredible jobs on the remixes from bands and artists such as; King Crimson, Gentle Giant, Jethro Tull, XTC, Steve Hackett, and Hawkwind’s 1975 overlooked classic, Warrior on the Edge of Time. He has been doing well as a solo artists that he launched 10 years ago with the release of Insurgentes and right into his fifth studio album, To The Bone. There’s no turning back for him.

And I almost forgot his collaboration on the soundtrack he did for the 2017 video game, Last Day of June released by 505 Games and developed from Ovosonico which was inspired by the ‘Drive Home’ music video and directed by Jess Cope. He’s won six Progressive Music Awards from 2012, 2013, 2015, and this year for the Storm Thorgerson grand design on box set designs, Guiding Light, Artist of the year, Album of the year, and Commercial Breakthrough.

Watching and/or listening to the concert released via Eagle Rock Entertainment, you can almost close your eyes and imagine yourself being at the Albert Hall while Steven is bringing his voice, guitars, material, and conceptualized ideas that he has brought to life, during this tour for his fifth studio album. In the interview that is on the Blu-Ray as a bonus feature, Steven describes what is part of the fun of going to see a rock concert? He says, “Part of the fun in going to see a live show is the band strike up the first notes of a song and you recognize it, or you kind of feel it. I feel it from the stage, that kind of buzz from recognition.” And he and the band members are having a blast. There are some songs not just from his solo work, but his work also with Porcupine Tree.

He’s making sure that he’s letting the fans know that he hasn’t forgotten his roots. And while he may have come full circle with his original band, he’s never letting the flames hitting the ocean. From the moment you hear ‘Permanating’ which has divided lines in the sand between his fans whether they like it or not, this shows Steven’s appreciation of pop music between The Beatles and ABBA.

When the Bollywood dancers appear on stage, you could feel the electricity between the dancers and him. Theirs is some nods that the Camera does between Brian De Palma’s early work and Adrian Maben’s film of Pink Floyd Live at Pompeii. And I love Steven’s tip of the hat towards the crossovers between Talk Talk and ABBA’s ‘Dancing Queen.’

The bone-chilling nightmare for ‘Song Of I’ gives Alex Hutchings a chance to play his guitar not like Jimmy Page, but adding the tense moments to go beyond to open those doors to show something dangerous and the moment you open them, they aren’t going to be exactly what you’ve heard. With ‘Lazarus’ the camera looks at Steven as if he’s reminiscing Anthony Perkins’ character of Norman Bates from the 1960 classic, Psycho. The music has this ominous vibe before switching gears as the lighting goes from blue to purple as we see the faceless women on screen doing some bizarre dance moves as they groove into the beat before Adam Holzman’s fusion-sque arrangements gets center stage.

Hutchings’ solo brings to mind between both Frank Zappa and David Gilmour. When you watch Wilson during this song, he’s very much like a conductor. Not trying to be like Leopold Stokowski, but giving two of the band member’s their own free-rein with their improvisations. However, Ninet Tayeb herself steals the show from the last night of the performance at the Albert Hall.

When you listen to her sing ‘Pariah’, ‘People Who Eat Darkness’, and ‘Blank Tapes’ wherein the first and last part she duets with Steven at the final night at the Albert Hall, the collaborations between the two of them are a perfect match, perfect combination, and a perfect team. With her presence on the stage, you can expect some brilliance and her singing as Tayeb has Steven’s back to lend him a helping hand.

But watching the rehearsal version of ‘Routine’ that’s on the bonus feature from the Blu-ray, it is very powerful, emotional, and very strong that I wish that could’ve been on that evening performance. It would’ve been the perfect show-stopper on this amazing set. Since I was blown away by her singing from her guest appearance of Steven’s 4th studio album, Hand.Cannot. Erase, she’s come a long way and going beyond the Kokhav Nolad (A Star is Born) structure which was her breakthrough performance after winning first place in the final round in 2003.

But as I’ve mentioned before, with the collaborations that she has with Steven Wilson, it’s a perfect combination and I hope they worked together again for many years to come. Going beyond his solo career, Steven also revisits some of the classics from his time with Porcupine Tree and it’s given his chance to share to the audience that he hasn’t forgotten his original band he formed back 31 years ago.

You have the galloping drums of Craig Blundell and the hypnotic post-rock guitars going into the territories of Jonny Greenwood that becomes a roller-coaster ride with ‘The Creator Has a Mastertape’. You can see the lights flashing rapidly as cameras going through different angles of Nick Beggs, Wilson, Hutchings, and Holzman’s eerie atmospheric finale before Adam himself delves into a sombering piano section with some hints of Jazz, Classical, and the Blues thrown into the mix.

Beggs, Wilson, and Blundell uses the shakers for this rhythmic introduction that they use to get the audience to clap along on ‘Arriving Somewhere But Not Here’ before Hutchings’ OK Computer-sque guitar lines fill the void. And Steven himself is perfect at communication as the screen in the background is showing rapid images of cars driving down the highway, beaches, and some city locations by giving their own take of the alternate score to the 1983 film, Koyaanisqatsi.

But when the band leaves the stage, this gives Steven going through his rhythmic electric guitar and playing this daring yet punk-like version of ‘Even Less’ that goes from a rapid-firing gun to some very soft moments as the song describes the loss of a friend that he tried to reach by helping out, but knowing that he had his own personal demons he couldn’t escape from.

When I was watching that, it almost reminded me of the poetry style between Allan Ginsberg and Paul McCartney performing at the same venue in the Royal Albert Hall doing the live version of ‘The Ballad of the American Skeletons’.

Watching this concert on my XBOX One, I was both thinking and asking myself, “Why is he doing this?” And then I realize, he’s doing this because he’s having a blast and a good time. He’s not doing it for show, he’s not doing for the money, but Steven is doing this because he wants to communicate, have a great time, and always show that he’s about the music. He’s not a big gigantic massive superstar like Paul McCartney and dare I say Kanye West, but Steven is doing what he wants to do by going forwards. Whether they like the idea of him going into a new direction or not, the doors will await him to see what will he think of next.

Since I was introduced to the music of Porcupine Tree in 2006 after reading about one of their reviews (Fear of a Blank Planet) in Classic Rock Magazine back when I was in College, Steven shows no sign of stopping. The music has always been with him since he was a kid. To quote again from the late great Robin Williams when he performed at the Roxy for his HBO Special Off The Wall 40 years ago, “You’re only given a little spark of madness. And If you lose that, you’re nothing.” And for Steven, he hasn’t lost that spark of music that keeps him going. He’s still touring this year and I will be seeing him this December on the 20th at Houston’s House of Blues. Steven is the Lightbulb Sun to the Radioactive Toy and the Sky that will move him Sideways.