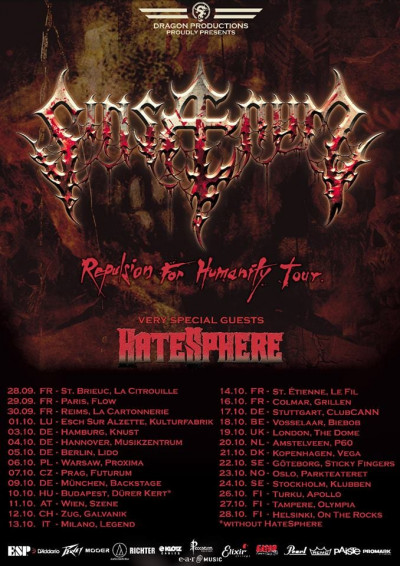 Sinsaenum at The Dome

Sinsaenum is the extreme metal band formed by ex-Slipknot drummer Joey Jordison – yeah, you know, the spinning-drum-riser guy – and Frédéric Leclercq, bassplayer from Dragonforce, who released their second album Repulsion for Humanity earlier this year. This is their first every show on UK soil and – given the all-star cast – expectations are understandably high. Well Sinsaenum may be a band comprised of several prominent figures in metal, but their first London gig proves that they’re more than just a supergroup. I’ll explain why that’s a good thing in a bit.

The first support tonight T.A.N.K are a French band, who were announced only a few hours before the show, whose brand of melodic death metal is as polished and smooth as their vocalist’s blond quiff and the band’s tailored goth apparel. The Dome’s ‘no readmittance’ policy shits on the support bands a bit, with a lot of people choosing to fill-up on dinner, fags and cheap booze before entering the venue. While this is perhaps unavoidable to ensure alcohol-fueled profits (and, look, I’m clearly glad that the venue is still going strong and all that), it does award T.A.N.K the difficult task of heating up a lukewarm and rather threadbare crowd. Using all the tools at their disposal – harsh/clean vocals, tight riffage, harmonised double-tapping solos – T.A.N.K are well up for whipping up a storm. The main guy keeps calling for crowd participation, for more energy, fist pumping and shout alongs, which works best during what is presumably their centre-piece track: ‘T! A! N! K!’.

So that stands for Think of A New Kind, and these guys are doing a fairly new kind of riff on the Gothenburg sound, largely avoiding the teeny, emo side of latter-day In Flames. Highlights include ‘The Phantom’ from their new album, which is out in the next few months, and on the final track, which echoes Slipknot’s more recent material, they just about pull off some soaring vocal harmonies. T.A.N.K’s first gig on British soil shows they have the stage presence and the songs, with a package that that is polished if a little predictable.

Danish stars HateSphere, on the other hand, are certainly tight, yet are too raw to be called polished. Dating back to 1998 and with nine albums under their belt, HateSphere play, in their own words, “Hand-made, old-school, real, in-your-face metal” – a gloriously-grotty blend of death and thrash. Main-man Esben “Esse” Elnegaard Kjaer Hansen growls like a man possessed, with even a hint of the whole Anthrax semi-rapped delivery coming through. This is big ballsy death-groove that you can’t help but move to, with plenty of the intricacy of Teutonic thrash to boot. Intricate it may be, but they know how to do build-ups – drop to slamming riffs, cold snare taps at half time, whip up some energy in the pit – and eventually commence the blasting.

HateSphere have a new album out today, Reduced to Flesh on Scarlet Records, and the merch guy holds up the vinyl for all to see. “It’s the mustard album”, says Esse, referring to the background of the cheery coffin cover. Well the new single ‘Corpse of Mankind’ proves more than an enticing introduction, showcasing Esse’s trademark yowl-growl, drummer Mike Park Nielsen’s quite breathtaking fills, and some glorious dual-harmony lead over classic-rock-tinged groovy riffs.

“The next song’s a real headbanger,” Esse says of ‘Resurrect With A Vengeance’, “so wave your hair like you just don’t care.” He’s not wrong, and this slow, beefy chugger whips up a flurry of wind-milling to rival even the windiest of Dutch fields, complete with Morbid-Angel-style gurgles, and building up to a jagged, pinch-harmonic-embellished shred-along ending.

Unsurprisingly, Esse’s announcement that “this next song’s all about the drinking” introduces an earlier single ‘Drinking with the Kings of the Dead’ from the 2007 album Serpent Smiles & Killer Eyes. There’s a whole lot of energy and enthusiasm from on-stage throughout their set, but from here-on-in it gets pretty nuts, with Esse gesticulating like a man electrocuted and endless headbanging, shampoo advert style. Apparently they usually have a wall of death during ‘Ruled By Domination’, but tonight settle for “dancing the walk of love”, which involves hugging someone near you as the riff drops. Which people actually do. HateSphere tour the Balkans with none other than Decapitated in November, and you certainly won’t regret catching them whenever you can.

Sinsaenum: a portmanteau of ‘sin’ and ‘insane’. Conceived in 1996 during conversations between Joey and Frédéric about doing a project that would let them follow their mutual, extracurricular love of extreme metal, they finally released their debut album Echoes of the Tortured some twenty years later. Apparently they had some world tours and stuff to do in between.

The pair recruited an all-star band, rounded out by Heimoth from French black metallers Seth on bass, and Stéphane Buriez from French death/thrashers Loudblast also on guitar. One interesting decision was to recruit not one but two vocalists for the project. Pulling in Sean Zatorsky, also from Loudblast and who had a jaunt in Chimaira, makes sense, offering a pre-established musical relationship that presumably provides a sense of stability. Another interesting decision is in regards to the second vocalist. Just some bloke called Attila Csihar. Yeah, that guy. The guy who dresses as the Witchking of Angmar gone glam in Sunn O))). The guy who replaced the recently-deceased Death in Mayhem. You know, probably the best and most versatile vocalist in extreme metal. ATTILA CSI-FUCKING-HAR.

Well he’s not here tonight so don’t get your hopes up. While Atilla is apparently a full-time member in the studio his live contract seems a bit more zero hours. Scanning through some tour schedules, he’s not obviously playing a gig elsewhere tonight that I can see, although he did turn up at a recent Sinsaenum gig in Budapest (at which I wasn’t). We’ll let him off: he’s a busy lad. But that doesn’t really matter. Most importantly, Sean Z is doing a damn fine job on his own.

If someone sucked the bullets and poison from Rasputin’s corpse, spruced him up quite a lot, and gave him a mic then he might look a little like the finely-bearded Sean Z. There’s no rockstar attitude from Sean (or weird holy man attitude come to that), but he’s every bit the frontman. Right at the front, foot on monitor, where he remains for pretty much the entire show, Sean easily commands the stage whilst peeling off the full range of metal growls and screams.

What do Sinsaenum sound like? Well if you mix up Slipknot, Dragonforce, Mayhem, Chimaira and Loudblast in a blender, you’ll have an especially nasty omelette that only your big mate they call ‘Metal Dave’ would wish to eat. Put them in a studio together, however, and you get a plate of full-fat death metal, peppered with the black stuff. Poland are probably head of the table, with Decapitated and Behemoth cutting their omelette with precision, Sweden next to them are drinking fine wine with notes of epic melody, while just about every Florida DM crew are indulging in a scrappy, grimy food-fight around them. Tasty.

‘Repulsion for Humanity’ kicks off this show – it is the Repulsion for Humanity Tour after all – and two tall guys, tonight’s primary mosh instigators, get cracking with a bit of argy-bargy. New single ‘I Stand Alone’ is a highlight for me and seemingly for many others, managing to be catchy yet brutal simultaneously. On another single ‘Final Resolve’, they bring out a second drummer to the side with a tightly-tuned floor tom, bringing a suggestion of tribal-style Sepultura to the stage and sounding like Joey’s good old tub-thumping pals in Slipknot. There’s a bit of flag waving going on for ‘Army of Chaos’, and by now the mosh is whirling nicely alongside the widdly dual-guitar madness.

That’s the other thing: Frédéric’s day-job might be on bass but he’s no one-trick pony. (I mean arguably being a one-trick pony in Dragonforce makes you more of a wild-herd stallion, regardless if you have a taste for virtuoso power metal, but you get the point.) Hearing brutal death with Stéphane and Frédéric shredding merrily along together you’d be forgiven for thinking you’d entered a Decide gig back in the Hoffman brothers days (if a little less atonal).

The Dome could still be fuller tonight, frankly, which is a bit of a shame, especially given the calibre of the headliners: you can see the wooden floor through the mosh more than usual, reminding you how much like a school gym the Dome can look. But it really doesn’t matter as, in many ways, this isn’t meant to feel like a superstar bash. Sure, at one point Mr Z films the crowd from his phone “for the Metal Hammer Instagram”, nonetheless, and yes the post-gig signing queue is massive. But Sean sums it up best when, toward the end, he thanks us earnestly for enabling this to happen, and keeping the death metal underground alive. There’s no drum solos suspended above the stage; no guitar wankery under the spotlight; no egos; no compromise. Because, at the end of the day, that’s why Sinsaenum are here: for a return-to-roots, back to the underground for the love of playing the nasty in sweaty venues.  Rounding off their European tour in October, Sinsaenum then bring the madness to the downunder underground on a trek across Australia and New Zealand in November. Let’s hope they return this way again real soon.