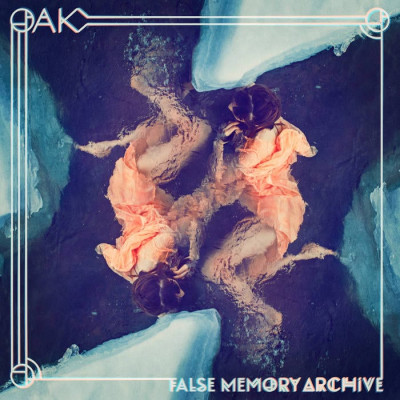 How would I describe Oak’s music? Dark, pop, electronic, and a little bit nightmarish. After listening to their second album, False Memory Archive released via Karisma Records this year, I was completely spellbound right from the moment I put the CD on from start to finish. They formed five years ago in their hometown in Norway by starting out originally as a folk-rock duo and moving as a progressive rock-pop group.

Now for me, after delving my toes into the water of Oak’s music, I begin to realize how much of their influences range from the styles of; Talk Talk, Porcupine Tree, Tears for Fears, and Leonard Cohen. When I bought False Memory Archive from The Laser’s Edge website back in October of this year, I had no idea what I was about to expect. After several listens, this is perhaps one of the most beautiful and emotional releases I’ve endured from start to finish.

Listening to ‘Intermezzo’, which is Simen’s wonderful interpretation of Debussy’s ‘Clair De Lune’, brings us up towards the evening sky filled with alarming noises, it raises the temperature levels up by raising the heat gage as high as it can go. Going through those dark passageways on ‘The Lights’, Oystein’s acoustic guitar and Simen’s Leonard Cohen-sque arrangements go through this trip-hop section before delving into the style of Talk Talk’s Mark Hollis.

I can hear some clapping sections on he before the guitars go into some hay-wiring territory as the riffs from the acoustic guitar, brings to mind the interpretation of Haken’s ‘Nocturnal Conspiracy’. It then changes into something that is beyond the tunnelling lights as the character of their mother goes through to reach their hands out of the water and letting them know, that everything will be okay.

The opening track which takes its name from the Carsten Jensen 2006 novel, ‘We, the Drowned’ starts the album off with an electronica groove. When I was listening to this track, it reminded me of Mick Jagger’s performance from the controversial Martin Sherman 1979 and 1997 film based on his play, Bent. And it’s done in the style of the song, ‘Streets of Berlin’. The setting has this Blade Runner-sque background of this dystopian wasteland that is now piles of rubble and abandoned cities that can never, ever be rebuilt again.

You can tell that as a listener, the loss of innocence is something that was told to you over and over again, that once you believe that everything was told about a new beginning, it turns out to be a big gigantic lie. The title-track is an acoustic romantic waltz in 3/4 time of showing the signals of the faded memories down into the rivers of remembrance with some of the Steven Wilson-sque lyrical backgrounds.

The music itself becomes stronger between the piano, bass, and clapping as you head into the unknown city of the location to find and discover your true inner self. Simen must have listened to Leonard Cohen’s arrangements. I can tell that it is him tipping his hat to the master on ‘Lost Causes’. The sax which is done by Steinar Refsdal and the guitars by Bjorn Riis, captures the signs of no coming back of what had happened in the past, but to moving forward and letting go of the details to see where the next chapter awaits them.

Steinar breezes through the smoke before the alarms blare out of nowhere to raise how many innocents were taken away and the toll level is about to be much bigger. False Memory Archive is Oak’s crown jewel. And while this is their second album to 2013’s debut Lighthouse, I will hopefully keep an eye out for this band more and more in the future to see and hear what more adventures they will come up with next.