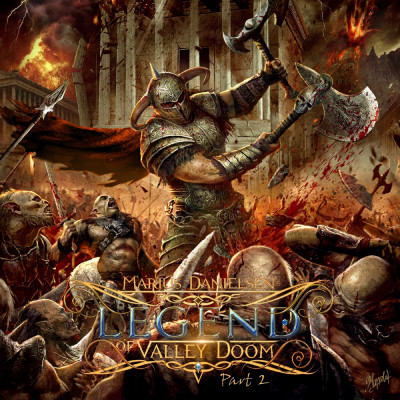 Power metal. The name alone sounds, y’know, powerful. Like standing at a cliff edge while gales of wind off an icy ocean blast your face. Or sitting astride a huge, muscular horse, while waving a lethal sword around your head. Or, more realistically, puffing out your chest in a triumphant fashion while driving too fast, lifting too much or running too long (I have done all of these while listening to power metal). Guilty pleasure? Nope. I don’t feel one iota of remorse for bellowing “All men play on ten” while showering or making the kids’ breakfast.

Which brings me to Marius Danielsen, who is a writer of great power metal songs. Honestly – you hear the major-chord-packed choruses in this album and you swear that you can throw the horns, flex your magically enormous biceps and real lightning will actually shoot out of your fingertips.

Those who heard the first instalment of this tale (this is the second part of a trilogy) will have known this already. A metacular cast of metal stars belted out the story of the Dark Lord killing a king, his son vowing revenge on the enemy, but then himself getting whacked – so the entire clan has to seek help in another kingdom. Powerful, huh? You bet.

And now three years after Part I was released, comes Part II. It picks up where the previous album left off, with the citizens of Valley Doom heading to Eunomia.

But more on the story later. First, it is important to mention that apart from being a great example of a power metal album, Legend Part II is a triumph of DIY tenacity. Danielsen, a metal superfan (and pretty decent guitarist) from Norway rounded up a huge cast of performers for Part I and he has repeated the feat for this album, which he wrote with his brother Peter, who also contributes keyboards.

Blaze Bayley of Iron Maiden is there – Danielsen wooed him by telling him he wanted to draw on his operatic power-metal sound – as are luminaries from Yngwie Malmsteen’s band, Whitesnake, Stratovarius, Helloween and Judas Priest. Heck, even Michael Jackson’s virtuoso guitarist Jennifer Batten is there. To assemble this gaggle of metal legends must have been costly and time consuming, even before the task of weaving them all together into the mix began.

But let’s be frank. All the names in the world wouldn’t matter a hoot if the songs weren’t there for them to shine. Thankfully, they are – and just like Part I they are massive and hook-laden.

That said, this album is a little more ballad-heavy – and more operatic – than the first instalment. And it begins on a bit of a downer, with ‘King Thorgan’s Hymn’ with the people of Valley Doom making their way to Eunomia while lamenting their dead ruler. They get to their destination by the third song – before which we have been treated to the galloping ‘Rise of the Dark Empire’, which is the catchiest warning of evil I have ever heard.

They then find their way over the ‘Crystal Mountains’ (song six) to a dragon (song seven, ‘By the Dragon’s Breath’) who has made one of seven crystal swords, which I guess will be used to cleave the Dark Lord’s head clean off his neck in the already much-anticipated (by me) Part III.

These two songs form the centrepiece of the album and are magnificent. Everything you would hope to hear in a power metal album is there: pipes, flutes, symphonic keyboards, wine-glass-smashing operatic vocals, bludgeoning double-kick drums and dizzying guitar solos.

And as if that wasn’t enough, ‘Under the Silver Moon’ follows, which is a lighters-in-the-air classic, with its chorus of “Standing on the edge of the world, I am looking at the starlit sky, dreams of a better place I’ll go, still I am trying to hold on for a brighter day” guaranteed to give you goosebumps, if you are that way inclined – especially when the dragon appears (sorry, spoiler alert).

There are other highlights, such as ‘Tower of Knowledge’, which is a the epitome of a mid-tempo ballad which builds to gargantuan proportions, and ‘Temple of the Ancient God’, which sets up the third episode nicely, by way of an earworm of a chorus, some incredible drum work and nostalgia-inducing keyboards.

Sure, the story of death, a quest, obstacles, magic and dragons has been told in many various ways before. But the conviction with which Danielsen and his cast of over 40 performers get the message across through the medium of enormous operatic metal is something to behold. As well as the trilogy of albums, there is also a comic (Part I was almost sold out, last time I looked) and a cartoon in the pipeline.

And most importantly, this is power metal done excellently, with decent tunes, tremendous gusto and a clear narrative. That alone should be applauded. More power to Marius Danielsen.