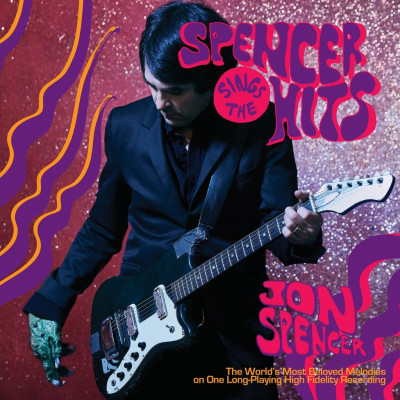 Jon Spencer on the web:

You would expect nothing less from Jon Spencer than a boastful proclamation like Spencer Sings The Hits!, which is the title of his first solo album. Here is a man who has spent a career roaring the odds about his exceptional abilities and constantly hailing his former band The Blues Explosion throughout his extensive back catalogue. The verbose Press Release that accompanies this promo contains some staggering plaudits that you have to admire yet I have the suspicion that Spencer was the person responsible for it. There’s no doubting his presence on a stage is a thing to behold, an impassioned, soulful, (punk) rock and roll degenerate who manages to create a truly awesome hype while extolling the ghosts of Elvis, James Brown and a plethora of manic street preachers. (Not the band!)

I first came to worship at the Spencer pulpit around the time of 1996’s Now I Got Worry, oblivious to his previous bands Pussy Galore, Boss Hog and Heavy Trash. Needless to say I remain in a state of relative oblivion. Occasionally I dip back to that classic album when in the mood and as there really isn’t anyone else around (that I know of) who makes this kind of shit, to make you feel that level of good. That’s the crux of the problem with Spencer, you really do need to be in the mood. Capable of hitting the spot in a very good way, personal favourites include ‘Blue Green Olga’, ‘Do You Want To Get Heavy?’ and the sublime ‘Talk About The Blues’ from Acme. (The David Holmes remix of the latter on Acme + even goes as far as to feature manic preachers and it is fucking amazing). The slamming drums and seismic groove on ‘Damage’ showcases a tremendous way with the funk. When he’s good he’s very, very good.

I am tempted to cut and paste this excerpt from the aforementioned PR and just leave it as the review of the album. “This is Garage Punk for Now People! A wizard’s brew of rhythm & blues and subversive dance grooves, weaponized with sci-fi skronk and industrial attitude, calibrated for the Revolution, a ball-peen hammer of sound guaranteed to destroy any post-modern hangover!”. This is a perfect synopsis of an album that unfortunately I struggled to get to grips with. As I said, there are “hits” throughout Jon Spencer’s back catalogue but I don’t hear any on this album.
Opener ‘Do The Trash Can’ is a creepy monster mash style shout-a-thon about absolutely fuck all squared. Heavy bass grooves overdrive the trash can percussion, it’s groovy, super groovy in fact, but lacking anything remotely resembling substance. ‘Fake’ could possibly be fated to end up on Donald Trump’s campaign trail (though I doubt Spencer would agree to it) largely because of the “Your shit is fake” lyric that permeates throughout. The song is a stop-start fiasco that seemingly exists as a backdrop for Jon to shout the tag line. Every now and then it locks into a pleasing groove before being whipped away before you get to grasp the nettle.

The waspish bass line on ‘Overload’ is the main focus of a track that is nothing more than a sketch, that could easily have been a spoof on The Fast Show’s Jazz Club. The one redeeming feature of this album is the bass grooves throughout and on ‘Time 2 Be Bad’ the bass bubbles and bumps and the beats are equally as funky. One of the decipherable lyrics appears to be “sho nuff I got ta get my shit together”. I wish you would Jon.

As a soundtrack to a chase scene in Scooby Doo, ‘Ghost’ works perfectly fine with kooky percussion and a freaky keyboard hook. The reference to “stop playin with the butter knife” on ‘Beetle Boots’ has me wondering how does Jon Spencer keep churning this out? ‘Hornet’ features the kind of lopsided groove the Beastie Boys would find themselves doing as a wacky interlude. I once saw Jon Spencer support said band in a giant cowshed. A fond memory. Next up is ‘Wilderness’, one of the few tracks to approach a song structure albeit a “song” with zero melody or memorable hooks.

I’m not sure what the aim of ‘Love Handle’ is, Spencer inexplicably hollers “get that muffin top moth-er fuck-er!” at one point. The only comprehensible words I can make out on ‘Alien Humidity’ are “come on” and “human error”. Ultimately that’s how I feel about taking on this review. I can’t muster any opinion on the senseless ‘Cape’ which just leaves ‘I Got The Hits’. No Jon. You don’t.
You might be thinking at this point, why did I take on this review? As I mentioned at the outset, Jon Spencer has some clinkers in his back catalogue and I wanted to see if there were any more incoming. I knew there was a risk element given that a substantial amount of his music cannot hold my attention for very long. One of the joyous elements of being part of the Blues Explosion was that he had two brilliant musicians behind him who could lock into stunning loose/tight grooves.

Without the swinging wrecking balls that are Judah Bauer and Russell Simins, I find Spencer a more difficult and unruly proposition. There is no disputing the man still has that unbelievable knack of being utterly unique, “Often imitated, never duplicated, the original NYC underground-rock legend!” according to the PR. You really do have to admire Spencer’s tenacity in spreading the rock n’ roll gospel as he sees fit. I guess I’m just not as receptive to hearing it as I used to be.