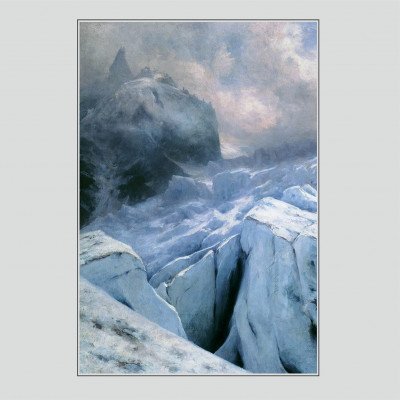 Quebecois group Cantique Lépreux bring a new delivery of locally-trademarked version of fast and atmospheric black metal, galloping hooves drum kick and epic trance-riffs, which tend to be complex attacks on simple memorable structures, with touches of more trad metal guitar flourishes and licks here and there; there’s even a guitar solo on ‘Hélas’ that approaches a kind of stadium-black-metal wailing, widdling and tapping. Largely the vocals are firmly in the Mgła style (no bad thing at all, though I might have mentioned that in a previous review since it’s such a likeness that it can’t really go unnoticed for me), though there’s a bit more variety than last time in the yelps and grunts that occasionally punctuate.

After the briefest eldritch moan the band burst into the drill-to-the-head piercing exhilaration style while that burbling groaning sustains the sense of spirits haunting the depths-of-the-forest performance. There’s a slightly more virtuoso lead guitar style than is often present in underground black metal, with sections where technically proficient swooping and gliding notes glint through. There’s a brief respite, a sort of halt to admire the surrounding icicles in falling snow, then the final few minutes of the long opening track is a redoubled reprise of the start: not faster, but just with great drum fills like the last burst of energy to drive the final distance.

Central to the record is a three-part suite ‘Paysages Polaires’, the polar journey theme entirely apt… Reliance on black-metal-reviewer cliches I know, but the guitar sound and style just is really pleasingly evocative of snow: falling swirling flurries in the faster bits, cold ethereal drifting in the more distanced ambient bits, and that wonderfully crisp-but-soft soundscape you get when you’re out early and the world is newly blanketed. Anyway, the trilogy begins with a raging hymn, again an apparently straightforwardly structured riff melody, but one that offers so much complexity and intrigue in how it’s delivered. The second part begins with another glacial riff with a brilliant hi-hat ticking over like the snow god’s warning finger, an icier centre, before the third movement returns us to the wild hunt.

The slower riff in ‘Les étoiles endeuillées’ is perfectly atmospheric, the simple descending notes allowing both coldness and nostalgia, and making room for some crunching variations in the middle of the track. As noted, shortish track ‘Hélas’ seems primarily an experiment in how far guitar solo explosions can be grafted to a black metal aesthetic, which is interesting and entertaining enough if not orthodoxly grim, and finally the track ‘Le fléau’ closes this collection of leprous canticles with a foreboding epic journey through grey-out storms and shadowed crevasses.