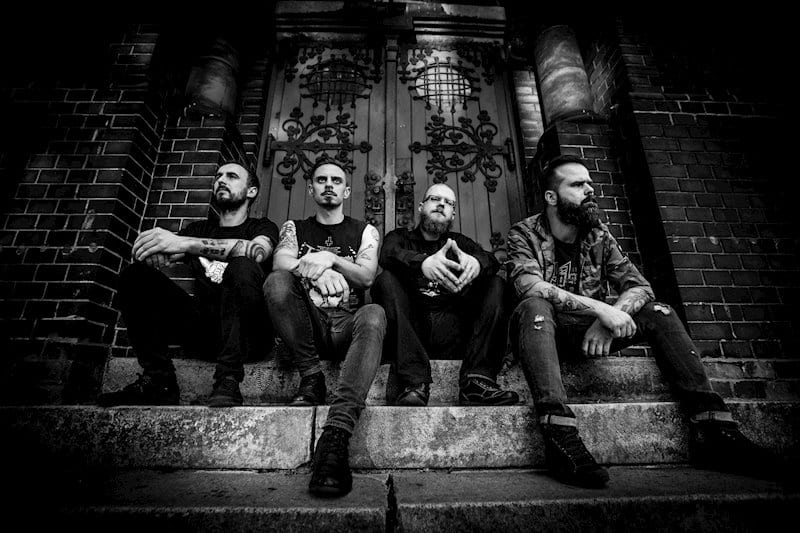 Cults, Crypts and Corpses is out this Friday via Pagan Records, and is available for pre-order from the record label’s webstore.

Cults, Crypts and Corpses picks up where Guts, Graves and Blasphemy left off. “It’s a continuation of the ideas on our debut album”, comments vocalist King of Nothing. “Short, heavy and fast. Ten tracks without filler clocking in at 30 minutes. The lyrics are about witches, crypts, serial killers and Satan. Simply put, rock ‘n’ roll with the devil in the background.”

The band members behind this satanic hardcore act are no strangers to the scene, Mentor are made up of members of Thaw, Furia and J.D. Overdrive. Like the previous album, they provide another unholy challenge for those who miss the primitive animal in metal and are fed up with its artsy incarnations. No filler tracks, just heavy rock’n’roll fuelled with hardcore and thrash-black metal.

Vocalist King Of Nothing provides the following track-by-track guide:

Possessed by eternal evil they go at night to unearth their master and die as his first offering. The inspiration for this song is mainly taken from Lovecraft. The first line of the music has a small reference to “Cemetery Gates” of the band we all know. Some influences remain with us forever.

Pet Sematary is one out of two of my favourite books by Stephen King. For some time now I’ve been thinking of writing lyrics about this novel. Paradoxically, the song title is an issue which appears in the film adaptation from 1989. The film is great, however, not always accurate with the central topics in the book, especially the aspect of Wendigo, which I’ve explored in more depth on the latest J.D. Overdrive album where I also sing.

For some reason I associated this number musically with war. The title refers to the ghosts of the battlefield, a haunted place, where echoes of its brutal past reverberate really loud in the distance. Initially, I wanted to call this track “Piles and Piles of Corpses” but the melodic chorus won. The line “endless piles of corpses” still makes an appearance in the lyrics.

The lyrics for this track are written from the perspective of a serial killer. Every day he wears a mask of a kind heartwarming man, but in the end it turns out to be a mask of death. I can’t be too serious in my texts, so I took the title from an old FPP game Amiga, and then I wrote the rest.

Two versions of the film House of Wax were responsible for the inspiration of this song: the 1953 version (which is mostly a remake of the 30s version) and the underrated 2005 version where Paris Hilton met her brutal and depressing fate (with an amazing death scene). My story is a bit rawer and gothic, but still gives a lot to the imagination.

The song’s music had the most influence on the lyrics here. It reminded me a lot of Municipal Waste and Toxic Holocaust – you can see where I took the song title from. And the cherry on top was when I added this ridiculous idea of a bathtub filled with toxic waste which a crazy scientist wants to use to produce mutants of a ‘super’ race.

I think this is my favourite lyric on this album. One of those songs that I’ll be proud of for the rest of my life. The idea was to write a love song, but to cover it in a Mentor-style cloak. And that’s how the most beutiful girl was born.

A song about hate and contempt… I think a lot of people could relate.

‘Up in the Bell Tower’

This is the second track which the guys brought to me at the last minute (the other one was “Death Mask”) so the lyrics had to be written in a bit of a rush. This was a diffuclt one, however in the end this image from childhood stuck with me: sitting in a church’s balcony not far from the organs while attending mass with my family. As a child, I always thought that it would be cool if  the area under the roof was occupied by a certain deformed monster. That’s when the bell tower came to mind and voila! – a beast with the face of a bat appeared.

‘Gather by the Grave’

This track is 100% a tribute to Black Sabbath. And Black Sabbath for me are the first five albums with Ozzy, I can do without the rest. I had to make some sort of reference lyrically to the first album, but also wanted to touch upon ‘Children of the Grave’ from Sabbath’s third album. And what says “I love Sabbath” more than a satanic ritual at the cemetery after dusk?