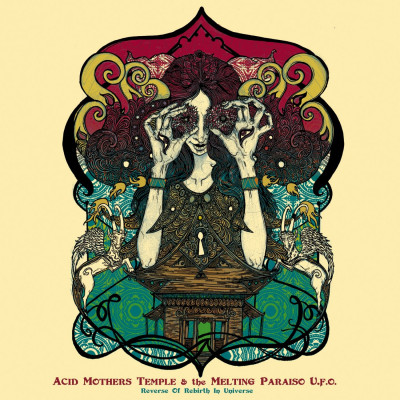 Having seen Acid Mothers Temple a billion times since 2000 with a shifting cast of characters and, recently, gradual list of long-standing members bowing out, I can testify that something of a rebirth seems to have taken place within the cosmic freak-out crew still led by original members Kawabata Makoto and Higashi Hiroshi. Based on a recent Cafe Oto show in London where the band excavated some of their early gonzo outsider-kosmische-folk jams, it seems fair to attribute much of this new lease of life to new member Jyonson Tsu. This enlightened space-being appears to perfectly embody the exotic instrument, imaginary language, ridiculous esoteric mythology and general sonic otherworldliness of the band as set down on what I’d consider to be the collective’s classic run of early 2000s albums. So it makes perfect sense that they’ve decided to revisit some of that weird charming magic in an album put out by Birmingham label and perennial supporters Riot Season. As hinted in the inside-out title Reverse of Rebirth in Universe, the record comprises two new versions of tracks from more than a decade ago, a long new piece, and, for the CD version only, a cover of a track by 70s faerie-botherers Gong.

First we get ‘Dark Star Blues’, first appearing in studio form in 2004 and fast becoming a live favourite for its intergalactic doom-crushing riff. Here its a more whimsical, lighter wisp, with emphasis on Jyonson’s vocals from the very start, though the iconic riff is still there, at first on tentative taut-rubber-band twang, then on a wider massed collection of acoustical organs. While far more restrained than the usual live rock-out, there’s still room for some good drum fills by Satoshima Nani on the upbeat before that sticky-heavy riff downbeat. Jyonson’s voice, while sounding like often random syllables (reportedly they’re fond of singing in entirely invented languages), sticks to melodic lines, and really transforms the breakdown section into a proper chorus. Then at the end we have some wild Makoto manic flaming-guitar-in-the-fireworks-factory, though without a full blasting noise backup it’s a spectacle admired from a safe distance, rather than the ecstatic joy of getting trapped in the red offered by some versions of this.

‘Blue Velvet Blues’ was first heard as a full record-long classic on the Pataphysical Freak Out Mu!! album. On this new twelve-minuter, the opening chord is a wonderful grounding in reverby, consciousness expanding acoustic-electric psych, instantly transporting you to the sonic Temple of the Acid Mothers itself. The track overall isn’t quite as cavernous as the clanging junkyard canyon original, but there’s still a healthy enough amount of sky-clawing rust-lightning in the guitar for the first five minutes or so. This is before the cosmic vocal reflections come in, which again add a far-out gentle weirdness trip, as the spontaneous singing is chased around by the firefly trails of Hiroshi synth peeps and zeeps.

The flipside, a long impressionistic new track has several sections where different rhythms compete, knitted together with a kind of smoking zoned out drone haze hanging round the back of the soundscape constantly, reminding a little of the bonus track on the CD version of La Novia, building slowly and exploring weird corners at its own pace. Especially so at the end, where we seem to be tipped into a murky sound world of hearing a reprise of the track through a glass darkly, or maybe through a flying saucer’s transistor radio. Pleasingly odd! The bonus track is more than a quarter of an hour of ‘Flying Teapot’. I’m no great fan of Gong, a bit too silly and twee for me, and the Acid Mothers Gong sets I saw years ago didn’t inspire me at all (in fact Daevid Allen chasing Cotton Casino around the stage with weird flappy hands on sticks was pretty creepy). It seems Acid Mothers have picked a decent track of theirs though, with a lively funky bassline which allows some guitar and synth improv to unfold, with Wolf’s rumbling bass towards the end even hinting at previous bassman Atsushi Tsuyama’s intrepid wandering lines of old. Not wildly keen on the team vocals but I’ll blame Gong for that, and anyway there’s soon enough some wild ray-gun smooshes and crackles to take us out.

So, Reverse of Rebirth In Universe feels like something of a boundary marker, a sense which is underscored by the press release talking of 21 years of the band, and of turning the page to a new chapter. If there was ever a slight hint that the band had expended their lurid cosmic noise energy over the decades, then such concerns should be dispelled as this record prompts us to look into the next years, no, centuries, of Acid Mothers Temple and the Melting Paraiso UFO! 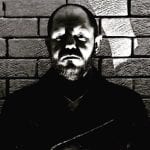