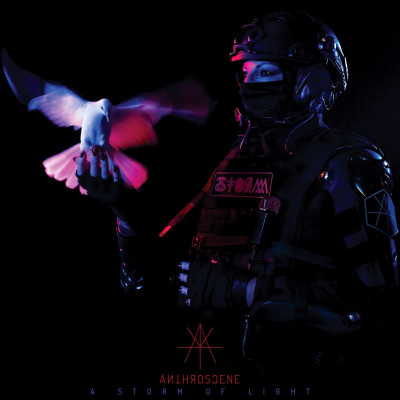 Anthroscene by A Storm Of Light

Dystopia is a popular Sci-Fi concept but modern society feels like it is trying its hardest to embrace that undesirable environment. A warming planet combined with the suicidal political ambitions of numerous leaders is already causing situations which were previously unimaginable. The vast desert landscapes of Mad Max combined with the metropolitan mass complexes of Batman seem to be playing out in different parts of the world. Within this state of wretchedness lies A Storm of Light with its fifth album Anthroscene. The first line of the resistance is the lyrical descent which protrudes the dirty industrial synths and ushers in post-metal with metallic guitar and thunderous drums. As well as causing war, politics has also influenced a vast body of great music. Whilst this album is angry it comes over as more restrained, whilst you won’t be thrashing around your living room you will be left in a state of powerless disbelief about the social and political environment of modern society. That is also the downside of the album; you are embraced by wretchedness, but never given a way to truly release the emotions that build up.

Rage Against The Machine are somewhat of a benchmark for political music that offers a release and there isn’t anything quite the same here. Whilst the politicised anger gushes out of the tracks and drips off the members of the former, A Storm of Light comes over as more introverted. This is one group’s anger and it has been swallowed down and slowly seeps into the lyrics, it isn’t spat out to inspire an uprising. “America is sick and crumbling…what the fuck is wrong with us?” rings through the opening moments which are musically thick in dirge and a deep drum sound. It is not until third track ‘Short Term Feedback’ that the vocals rise above the music and really let loose.

The album can seem a bit heavy in its lyrical contents but there is a bit of dark humour in places. ‘Dim’ which seems to concern President Trump contains lyrics such as “He says your precious until birth and then you don’t mean shit to me” and also “He says fuck the earth, I only love my country”. Aside from the lyrics the drumming is another aspect that is prominent throughout. It is a truly passionate display from Chris Common, formerly of These Arms Are Snakes. He doesn’t seem to stop, but is never over imposing and is also very varied in his patterns which never rest on the simplistic by making use of the full kit and it sounds wonderful throughout.

The guitar work can often feel understated due to the prominent placement of the vocals but there are moments where it shines. ‘Short Term Feedback’ is built on a solid base of thick ringing riffs with the chorus following the sharp strokes of the chord progression. Similarly, opener ‘Prime Time’ takes its vocal cues from the thunderous guitar riff which ranges from slowly ringing to faster pace. ‘Life Will Be Violent’ also has some great tone to the piece but again it is the vocal hook that is more memorable and present than the guitar lines.

With Anthroscene, A Storm of Light doesn’t move too far from their previous endeavours with a doom tinged industrial feeling post-metal. It is a good solid addition to their back catalogue but it never challenges the greats of political music nor post-metal. The putrid atmosphere of the album drags you into the depths of despair but never throws you out again, yet I find myself continuing to traverse its tracks in search of a release that doesn’t exist.