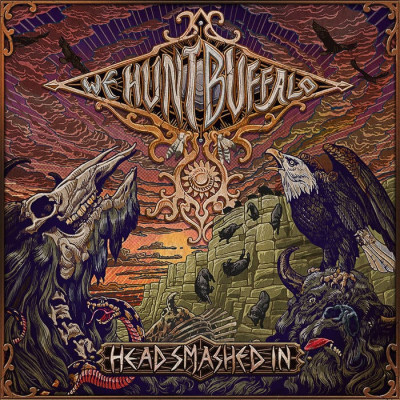 Head Smashed In by We Hunt Buffalo

The buffalo is a massive beast. Hairy, fuzzy, loud, powerful and likely to do you serious damage after you have experienced it up close. Vancouver’s We Hunt Buffalo are a three-piece band who ably match the creature they proudly claim to seek, in every way. Head Smashed In is their third album, following the bluesy We Hunt Buffalo, where the band initially displayed their groovy riff writing talent. Jesse Gander manned the desks for their second album Living Ghosts and beefed up their sound immensely. The intensity of the tracks was increased tenfold with an eye on keeping the melodies prevalent. There’s a few EPs around too that I recommend checking out, this band don’t do bad music.

As an introduction to the band, opener ‘Heavy Low’ serves up one almighty treat, it’s full of Grade A heavy gut twisting riffs, sledgehammer drums and high melody hooks. An absolute beast of a groove, it is impossible not to head bang and throw air guitar moves. Vocalist/guitarist Ryan Forsythe rips out the chorus of “Deep in a heavy low, but we kinda deserved it” and it could be a reference to weather or a bad trip. Either road, this song is right up there as a modern rock classic. Like a rougher version of latter day Mastodon the ode to fishy vigilante groups that is ‘Angler Must Die’ keeps the groove swinging with crashing cymbals and loopy riffs that swirl around your brain. Ryan’s guttural howls work well with the harmonies of the bridge.

Easing back off the throttle for a slower paced, giant slab of fuzzy riffs, the fluid guitar lines on ‘Prophecy Wins’ wind their way through the sludge like snakes sidewinding across the desert. The romping instrumental ‘Get In The Van’ features snappy guitars, choppy drums and brooding psychedelic deep throbs. Drummer Brandon Carter loses his shit altogether half way through, but it’s a bit of a throwaway track to be honest. The rigours of being in a hard working rock band in a savage era form the backbone of ‘Industry Woes’, a turbo charged but melodic piledriver. Ryan roars “The place, this race, will be the end of me!” and the song structure is perfectly paced with stop start sections that really accentuate the driving verse riffs.

I like to think that ‘The Giant’s Causeway’ is an ode to our wee country’s eight wonder of the world, where the Giant Finn McCool roams around when no-one is looking. A mythical story of “Colossal Beasts” and the Emerald Isle (yeeeeooooo!) is despatched and ably matched by some intricate and monstrous guitar work and superb hefty drumming. This is an album highlight which sounds like it has been created by the bastard sons of Phil Lynott. ‘Keep It Refreshing’ is a winding, lumbering groove with gargantuan walls of thick sludgy guitar that drags out Ryan’s vocals to great effect.

Ryan also gets to stretch out his vocals like a latter day Roger Daltrey on ‘Anxious Children’, a twitchy groove with slowed down passages which showcase the band’s ability to tread off the sludge path into bluesier territory. Book ending the album with the other standout track, ‘God Games’ is a mellow affair with some sweet organ low in the mix and a gorgeous heartfelt vocal. The tone of the guitars in the chorus is perfect allowing the song to breathe a little more than what has gone before. As the guitars duel towards the end of the song Ryan’s ad lib work becomes more fractious and out of control before the song ebbs away with some delicate picked notes over that beautiful organ.

We Hunt Buffalo’s press release proudly proclaims the band as “The new masters of groove and heavy rock”. They certainly have assembled an album that perfectly encapsulates monstrous riffs, swinging grooves and thunderous beats. I’ve had the promo for this album since June (!) and listened to it regularly ever since. The PR also advises to “turn it up loud and wrap yourself in a warm blanket of fuzz”. Winter is coming, I heartily endorse this advice.