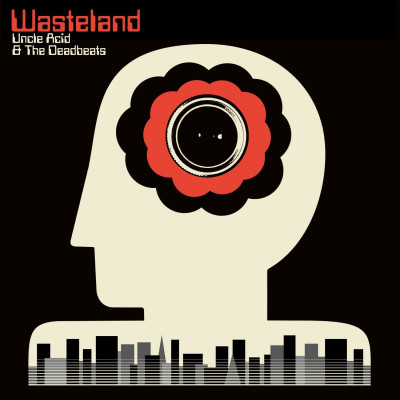 Wasteland by Uncle Acid & the Deadbeats

Fans familiar with Uncle Acid & the Deadbeats’ previous four albums will feel on very safe ground with new album Wasteland. The trademarks are all there in plain sight: the lo-fi production, the creepy atmosphere, the dark subject matter and, of course, the heavy influence of early 70s riffage. These all go into the pot to produce a truly unique band that has honed its sound, and a place in our hearts, since 2010.

Comparison of their later work with last year’s re-release of their first album, Vol. I, which back in 2010 was put out locally on CD-Rs in the band’s native Cambridge, shows how their sound has developed but not changed a great deal over the course of the intervening albums. To my ears Vol. I could have been the latest UA release, and I’d have been happy for that to be the case, because Vol. I is a terrific album, filled with oozing darkness and some amazing guitar hooks. They’ve received broadly critical acclaim since, in particular with 2015’s Night Creeper, another must-have, in my view.

The debate about whether a band must change and develop to hold a listener’s interest will always garner strong views from each side. Proponents of the ain’t-broke-don’t-fix-it school will be pleased that Uncle Acid have kept the same ingredients on Wasteland and that there doesn’t at first seem to be much difference in musical approach on this album compared to the last. Subject-wise, horizons have broadened. Night Creeper’s conjuring of Victorian London and killers in the gloom has been replaced with a dystopian future world where people are brainwashed, literally, having had their memories removed, and are kept stimulated by “propaganda screens”. They exist in walled cities like the living dead until a store of old memories is discovered, allowing them to awaken and escape into the wasteland, which is, of course, a new kind of hell. Deliberate parallels with today’s arguably dystopian present give the album an up-to-date relevance.

The album was recorded in the iconic Sunset Sound studio in LA, with equipment used by the likes of Eddie Van Halen. All this goes into creating an album that has a certain drive about it. Kevin Starr’s wish to reintroduce melody and harmony into new heavy music, plus the way the band record – live, in a room – produces the distinctive UA sound but does hint at fresh development.

Opener ‘I See Through You’ has a ballsy hard rock drive and catchy melody that goes to making this possibly the most commercial-sounding Uncle Acid track ever (but without losing their key sound). ‘Shockwave City’ follows this with a similar feel and tempo, the heavy riff strongly reminiscent of 70s prog and hard acts alike. These two tracks set the stall for a direct approach. ‘No Return’ changes gear momentarily, slipping back to UA’s creepier, more sinister past. It’s a woozy nine minutes of psychedelic haze, building to a thundering riff that makes me remember why I fell in love with this band in the first place.

Surprisingly, in terms of influences ‘Blood Runner’ and ‘’Stranger Tonight’ mark a departure from the early 70s. They’re much more grounded in the NWOBHM sound of the late 70s – fast tempo, twin guitars, foot on the accelerator – sounding much more like early Iron Maiden than Deep Purple. Another left-turn is title track ‘Wasteland’, which does away with the heavy riffing for a short while and has a lighter, more acoustic sound.

To sum up, my views about whether this album marks a development for Uncle Acid changed as I got to know the album. The sound and overall feel of Wasteland is rooted firmly in the band’s previous albums, but under that veneer there is a new resolve and more direct sense of purpose. The mix of NWOBHM-style tracks and the melody-drenched hooks elsewhere show a band that is determined to get its claws into you. So it wasn’t broke, didn’t need fixing, but a steely resolve has produced an album that does what UA have always done, only that bit better.