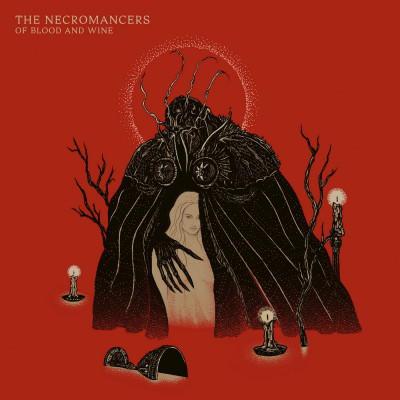 Of Blood and Wine by The Necromancers

Of Blood and Wine, the second album by The Necromancers seems to have come hot on the heels of their 2017 debut, Servants of the Salem Girl,  which caused a buzz on the underground that had barely subsided before the French metallers return.

That debut had much to recommend it and was probably most remarkable for its successful attempt to re energise melodic heavy metal in a way not seen since a certain Tobias Forge picked up a mitre and a rubber mask whilst dancing to Abba. It’s fair to say The Necromancers are haunted by Ghost comparisons, although they certainly have their own influences, chiefly a love of the galloping rhythms of NWOBHM and vocals that take in harsher, almost death metal style growls, whilst exploring various byways of modern metal, including doom, psych and stoner.

The similarities with Ghost are most obvious in the bands strong melodic hooks when aligned with vocalist/guitarist Tom Corniere-David’s softer mellifluous delivery, no more so than in the verses on opener ‘Join The Dead One’. The chorus and closing passages are harsher though and bring to mind Grand Magus in its chest beating swagger, but minus the air of Manowar-esque pomposity. This is perhaps The Necromancers greatest strength, the ability to harness classic metal sounds without ever sounding anachronistic or camp.

Lyrically however the band stick to standard horror and occult tropes and whilst ‘Erzebeth’ is a lusty chug of riffs and dazzling flash-of the-blade soloing I really don’t think we really need another re-telling of the tale of Countess Bathory. That said, fans of classic Maiden will no doubt delight in its extended instrumental passage which is gleefully heroic, as the locals enter the castle to put an end to the Countess’ bloody reign.

The title track is a brief, contemplative and sorrowful sorbet, everything dialled back to an almost acoustic feel with no drums. It’s quietly effective, especially as it then launches us into the album’s highlight ‘Secular Lord’, for me one of the best metal tunes of the year. It wins no prizes for originality in being about Vlad the Impaler, but frankly, if you don’t want to headbang to this then you are lost to the charms of good old heavy metal. In what’s becoming a trademark of the band ‘Secular Lord’ swaps between lilting, hymn-like passages and thunderous charges, with several crescendos and an then an abrupt, super mean finish. Spectacular.

The final two tracks drop the pace considerably and take a bit of time to assert themselves. ‘Lust’ has a melancholic, folky air as the band float on a serene Floydian melody that added to Tom’s vocal phrasing, combined with the air of dank ruination again bring Ghost to mind. It gets rougher and tougher midway through with giant echoing Flamenco riffs, but then settles again into its gothic tale of seduction, featuring extra sexy vocals from a seemingly uncredited female singer.

Closing number ‘The Gathering’ is an a attempt at a psych-doom epic which I find only partially successful. It has that ponderous swinging drum tempo, gloomy tones and crushing rifferama from the guitarists and huge swelling massed vocals. The central riff is more-ishly addictive, but for me the band never really let is fully explore its repetition with the aim of simultaneously hypnotising and crushing the listener. It’s very good, don’t get me wrong, but I think they should have let it run longer as Windhand did on their debut Soma to astonishing effect.

It is worth stating that the playing throughout is excellent, especially the twin guitars of Corniere-David and Robin Genais, who summon classic riffs and solos as if no one had bothered to try before. Indeed The Necromancers play heavy metal with a freshness and verve as if they just invented it and, as a consequence it is a joy to behold.