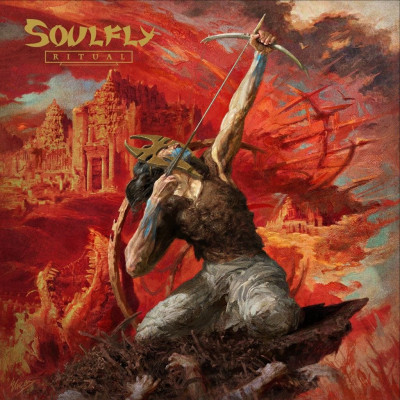 Soulfly are the Coldplay of metal. Yes, we know that sounds horrendous, but the evidence is compelling. They are wildly popular, they have been around for ages, they stick to a tried and true, crowd-pleasing formula and their lyrics are suitably vague, yet button-pushing, so everyone can relate to them but they avoid being overtly political or perceived as playing to a certain segment of their audience, (on their albums at least – both band leaders’ personal lives are more politically and socially aware). A horoscope entry in musical form, where everyone can go “he’s speaking to ME!”.

Having said that, I love Soulfly – or Max Cavalera and his band, to be more accurate – and have done ever since the dreadlocked demigod of groove metal split from Sepultura at the end of the 20th century. (For the record, I dislike Coldplay intensely – although ‘Yellow’ is tolerable.)

I have been sucked into their cult of riffs, non-targeted anger and spite, their sprinklings of tribal sounds meshed with visceral riffery ever since the first album. I even liked Primitive.

And now all of a sudden we are 11 albums in. And Max says he is reinvigorated, revitalised – and, in a move to make us all feel ancient, joined by his son on drums for the second time.

The last outing, Archangel, back in 2015, sounded a little like Cavalera was fatigued. It was in the midst of a flurry of releases by the Brazilian, with Killer be Killed and Cavalera Conspiracy records coming thick and fast either side of the Soulfly album. It sounded as if he needed a good rest.

And on this evidence, it looks like he has had one – because this release is the best we have heard from him for ages. The title track kicks the album off with a bouncing groove that are likely to inflict structural damage to hall floors everywhere the band tour. It is entirely familiar – from the tribal drumming (Navajo, apparently) and screaming siren of Mark Rizzo’s guitar in the intro, a la 2004’s ‘Prophecy’ – but hell, Max gives the people what they want.

And with songs like ‘The Summoning’, ‘Bite the Bullet’ and ‘Under Rapture’ ( the last of which features Ross Dolan of Immolation), the album continues to bring more goodies that we have come to love; songs that make us (if you will pardon the use of the band’s most nu-metal song and the guiltiest pleasure in Cavalera’s entire catalogue) jump da fuck up. There is a good helping of the faster Dark Ages style heaviosity too, such as in in the homage to Hellraiser ‘Dead Behind the Eyes’, featuring Randy Blythe from Lamb of God.

And unlike Archangel, it sounds as if the band are fully focused on the songs, helped, no doubt by the producer Josh Wilbur, who was behind the desk for a slew of Lamb of God releases and Gojira’s weighty L’Enfant Sauvage. He admits to being a total Cavalera fanboy and credits the band leader’s turn-of-century “holy trinity” Chaos AD, Roots and Soulfly with introducing him to heavy music. Cavalera, in turn, was impressed at how the youngster was so interested in the big man’s groove from long ago.

There is one curveball in the album, one which takes us right back to the Nailbomb days, via a Motörhead-style foot-to-the-floor barrage. It is the penultimate song ‘Feedback!’ and it sounds so un-Soulfly-like that I wondered at first if it was a cover. It is a welcome change of texture, amid an album of familiarity – and shows that even after all these years, Cavalera still has the ability to surprise us.