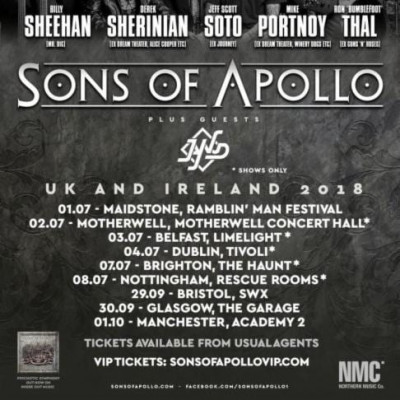 Sons of Apollo at SWX

This is the 69th time this year that Sons of Apollo have performed live. Their tour schedule has seen them take in the Americas, a lot of Europe and even Japan. Tonight, on face value, it seems they’re happy to have no language barrier with the crowd, judging by singer Jeff Scott Soto’s impassioned “I’m so glad you speak fucking English!” This, though, could be a genuine expression of emotion, or it could be the product of a schooled, polished performance piece. It’s hard to tell.

Over the course of these 69 gigs, there’s been very little variation in the set list – occasionally, festival slots have demanded shorter shows, and these have seen tracks dropped, solos abridged, and the whole experience streamlined. The downside of these leaner sets is that some of the progginess of the quintet is sacrificed to the reduced run-time. Tonight, following a technical display from Schiermann, Bristol is treated to the full Sons of Apollo live experience.

Opening with ‘God of the Sun’, the opening track from their sole album Psychotic Symphony means there’s no time to warm up musically, although the sound mixing and balance does noticeably improve as the set progresses. All of the set-pieces that make their album such a thrilling listen are dispatched with verve and no lack of technical skill. The group seem to be enjoying themselves and each other’s company. This camaraderie, along with statements from band members suggesting this is to be a considered a long-term endeavour, and not just a one-off supergroup album and world tour, bode well for their second long-player.

Until they record their follow-up album, though, Sons of Apollo have a dearth of original material for a headline set of this length. The inclusion of ‘Just Let Me Breathe’, and ‘Lines in the Sand’, both taken from Dream Theater’s Falling Into Infinity, are welcome, and improve on the originals by virtue of Jeff Scott Soto’s tones comfortably outstripping James LaBrie’s rather harsher vocal offerings. ‘Lines in the Sand’, chosen to close the main set, is particularly impressive, Sons comfortably navigating its many compositional twists and turns. Overall, the singer channels Ronnie James Dio, whilst Derek Sherinian’s playing in this band harks back to Jon Lord, particularly on ‘Divine Addiction’. 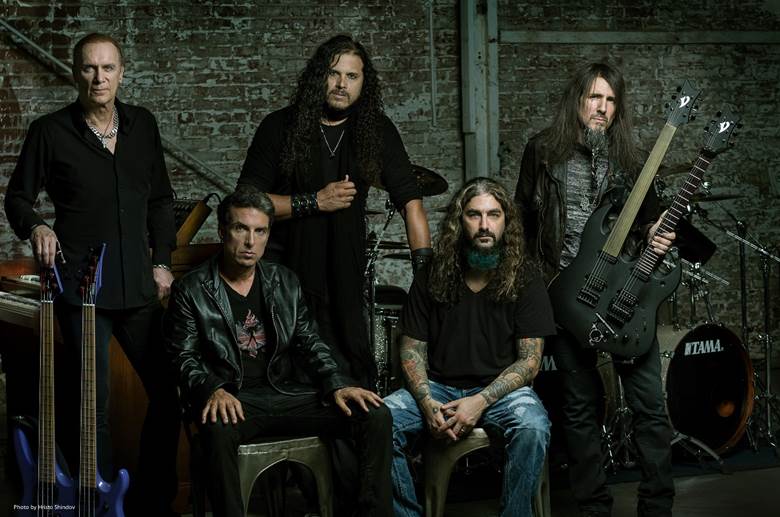 Away from these obvious fan favourites, and the Psychotic Symphony material, the set falters somewhat. The inclusion of Van Halen references in Derek Sherinian’s keyboard solo, along with the set’s intro and outro music, suggests the collective’s next steps might be more regressive than progressive. Stranger still are the cover versions doled out by the band during their solo slots. Guitarist Ron “Bumblefoot” Thal leads the group through a rendition of Henry Mancini’s ‘The Pink Panther Theme’. This brings a smile to the audience’s faces, but its addition to the set disrupts the flow and reduces the overall impact Sons have this evening.

Overall, the solo contributions are a weakness. Billy Sheehan’s bass effort initially grabs the audience, but this frantic fretwork is overly lengthy without sufficient variation to hold the crowd’s attention. Jeff Scott Soto’s solo follows not long afterwards, and one wonders why the other members could possibly require a break, having only recently departed the stage during Sheehan’s slot. The singer’s use of echo delay is perhaps the evening’s most inspired turn, but a strange choice of cover version again blights proceedings as Thal then joins the singer for a sing-along rendition of Queen’s ‘Save Me’! Strangely, the only member not to take the spotlight for an extended solo is drummer Mike Portnoy, arguably the group’s biggest draw.

For all their catchy choruses, ‘Opus Maximus’ is the band’s most impressive musical moment. This evening it’s note perfect, with Portnoy’s hand signals to Sheehan reminding the bassist of the forthcoming time-signature changes, all executed with aplomb. If a second album can take this complexity as a starting point, but retain the melodious refrains Jeff Scott Soto brings to the band, it could be a barnstorming listen. That said, the signs this evening all point to Sons of Apollo heading in another direction altogether.

‘Coming Home’ closes the set proper. Much like ‘Alive’, that appears earlier, it’s a brilliant but accessible hard rock anthem, and the band know it. By the time Billy Sheehan steals the mic from Jeff Scott Soto, midway through the frontman’s call and response moment with the crowd, it becomes apparent that what passes for onstage spontaneity is by now a tried-and-tested stage routine. The majority of the audience, seeing this for the first time, are delighted, but it is all perhaps a little too rehearsed.

Most bands on their first album aren’t thrust into the limelight in the way that Sons of Apollo have been. Sure, the musicians involved are all virtuosos with track records and careers to boot, and the size of the stage shouldn’t phase them. That said, a lack of their own tracks as a collective means there’s an unacceptable degree of showboating this evening. When they’re good, they’re great. The rest of the time, it’s advisable to take a trip to the bar. Should Sons of Apollo return with a full set of material, their devoted crowd will surely venture out again to see them perform. But this is as far as they can go on the strength of one admittedly excellent album.