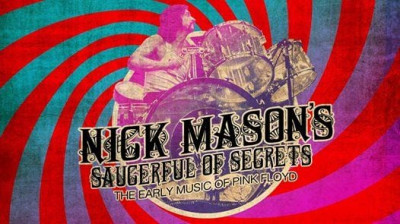 Whilst there may not be a thing such as Pink Floyd fatigue, there surely comes a point when yet another David Gilmour or Roger Waters tour leaves you hoping that just for once they would leave Dark Side Of The Moon and The Wall behind and explore the hidden depths of their back catalogue. Fleeting glimpses have been seen, with Waters regularly turning to ‘Set The Controls For The Heart Of The Sun’, and even Dave Gilmour, that most stubborn of warhorses, digging out deep cut ‘Fat Old Sun’ from the Atom Heart Mother album on his last turn around. All hope of ever seeing a delve into the heady (in more ways than one) past of the Syd era and the albums that followed must have been consigned to the back of every Floydian’s mind.

Perhaps stirred by the remarkable This Mortal Remains exhibition, or simply through “getting fed up of waiting for that phone to ring”, it falls on the most unlikely of Pink Floyd members to finally rediscover and bring back to life those songs, which not only laid the foundations of the behemoth they would become, but also inspired a generation of bands and multiple genres of music too. He may have got fed up of waiting, but for Floyd fans, that wait may have just been worth it as Nick Mason brings his Saucerful Of Secrets show to glorious life.

Seemingly coming out of the blue, Mason announced a few dates in London earlier this year where he said he wanted to get behind the drums again and explore those old songs. Tickets were like gold dust but tales of Syd era songs coming back to life led to intense enthusiasm which has resulted in this current tour. It’s not just the Nick Mason show though, and along for the ride he has brought a starring cast of fellow PF member (in the Gilmour years) Guy Pratt on bass, Blockhead guitarist Lee Harris, composer Dom Beken (who counts the Orb under his numerous credits), and Gary Kemp fulfilling guitar and vocals. Wait. . . what’s that. . . Gary Kemp? Yes, you heard right, and for all the ‘Gold’ jokes aside, within two minutes of the gig starting you realise what an absolute revelation he is.

Saucerful of Secrets is no exercise in nostalgia though, and tonight’s show in Manchester is testament to the continuing hunger of all band members to truly attack and find new ways through these songs. They are songs built on improvisation, and taking their cue from that pioneering spirit of 1968 onwards, Nick Mason and co gleefully reinvent those lysergic thrills into a combustible whole. That’s not to say they do a Bob Dylan and render the songs unrecognisable. Instead they bring the songs to life again, from the mists of time into full-on pumping space-rock monsters.

The opening shots of ‘Interstellar Overdrive’ and ‘Astronomy Domine’ are enough to instill in the Manchester crowd that tonight is not just about the past, but about breaking new ground, and it seems apt that the improvisational acid sections, as Kemp drags a Zippo lighter across the strings before causing epic squalls from the Echoplex, are finding a place in the city that spawned the Hacienda. That free-wheeling spirit of music has laid a charge through Manchester history, and much of it has been inspired by the music that is played tonight.

Kemp makes a good Syd Barrett, and as he snarls into ‘Lucifer Sam’, sharing vocals with Guy Pratt, you get the sense that he is up their for pure enjoyment. In fact, as the night progresses, the camaraderie between the band members is second to none, and although Kemp may offer his salutations to Mason, the erstwhile drummer is nothing but humble, and a little nervous in approaching the crowd.

The nervousness slips away the minute he turns his attention to the drums though, and as the glorious classic Floyd sound of ‘Fearless’ shows a man who is totally at ease with his instrument, there is also a sly look of humour as the strains of ‘You’ll Never Walk Alone’ pours out over the crowd. This may actually be the first and only time that song has been sung in such a venue with such joy. Breaking not just musical boundaries, but rivalries too, fearlessly.

‘Arnold Layne’ allows for some nostalgia as images of Mason in his younger days appear on the psychedelic backdrop. Revisiting the light shows of old, as the oil drops down the back, it’s a stark comparison to the uber-shows that Water produces, or the now classic video circle which came to define Floyd shows so much, and is still used by Gilmour these days. Mason reverts back to simpler times, allowing us to concentrate on the music.

Biggest surprise of the night is when the blissed-out acoustics of ‘If’ suddenly morph into ‘Atom Heart Mother’ causing a collective breath of awe from an enraptured crowd. A brief glimpse around shows people of a certain vintage swept away with the music, eyes shut, possibly revisiting those days of 1970. For this reviewer it was almost too much and, having had to wipe a tear away during ‘Fearless’, he finally succumbed to the true majesty of this band. By the time the song returns back to ‘If” you feel as if you have witnessed something quite extraordinary.

Other deep cuts to make the grade are a tremendously heavy: ‘The Nile Song’ where Pratt regales of his attempts to get Dave Gilmour to play it on tour, only to be told to find another band, the sly glance around possibly a wink to his old friend. ‘Green Is The Colour’ peaks its head from the mists of time and is simply beautiful, whilst ‘Obscured By Clouds’ becomes a moment when Dom Beken shows how Pink Floyd were such a huge inspiration not only for the music of the Orb, but also the entire ambient dance scene. Indeed, one of the resounding themes that hits home tonight is how influential these songs actually are. In Manchester you can see the chain of command from Pink Floyd, through the acid house days and into bands such as the Stone Roses. It’s all there, plain as day, yet hidden behind a fug of lysergic smoke.

The tripped-out sequences hit hard later as ‘Let There Be More Light’ introduces the section of the show where the band start to lift off into the songs that truly laid the foundations of space-rock. Tonight Mason finally gets to play the gong, after jokingly remarking on Roger Waters’ abilities of sharing to be non-existent. As the vibrations slowly gather around the audience’s feet, Mason leads the band to the heart of the sun, as Kemp and Harris build out psychedelic rushes of noise pinning you back into your seat as you take off. It’s almost a slight respite as they attack ‘See Emily Play’ with an aplomb not seen since the giddy days of 1968, but only until you realise they have turned the entirety of Manchester Apollo into a psychedelic playground. The final piece of the jigsaw for taking those remnants of your mind away is an entire audience of grown-up men and women singing along to ‘Bike’. That’s the point where you just have to tip your head to the true majesty of those early songs and consider that it was never the Beatles or the Stones who were the greatest UK band, but Pink Floyd.

It’s not over yet though, and the familiar sound of the bass sends us straight back down the space-rock route as ‘One Of These Days’ begins its majestic opening. When it hits, it hits hard and washes of colour and noise flow over the seated crowd, as if the rapture is happening but this time via the strains of one of the greatest instrumentals ever. It’s a moment which ties up the last hour or so into a defining package of songs which have finally seen the light again, after all these years.

Of course, it’s not over; and as an encore the band treat us to the improvisational clatterings of ‘Saucerful Of Secrets’. It’s a song that allows Mason to stretch himself and work on different rhythms and beats, but as the song develops it’s that glorious organ sound which reminds us of the importance of Richard Wright in all this music. He may be gone, but his music still lives on, and is now finding new life within theatres which haven’t experienced it since the early 70’s. It’s a moment of reflection which is cemented by final song ‘Point Me At The Sky’, which was never played live by any Pink Floyd reincarnation, yet finds pride-of-place as the closing number here. It seems perfectly apt too, and portrays that playful spirit which surrounded those early days. They may have levitated into a grandiose, symphonic beast; but deep down inside, Pink Floyd were simply a pop band at heart. It’s the final hit of a night which will stay with this reviewer forever, and marks the start of another interesting journey for not just Nick Mason and the rest of the band, but these songs too.

An absolutely outstanding night of music.