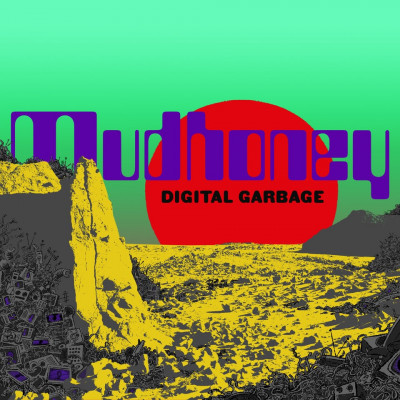 Mudhoney are celebrating their thirtieth anniversary this year, and they are marking that occasion with the release of their tenth studio album Digital Garbage on their long-time label Sub Pop. This being only their third album in the last ten years, there is quite a bit of interest around their long awaited return.

The album opens with the subdued ‘Nerve Attack’, a very different beast to the usual style of opening track that we are used to, its almost as if they have taken a bunch of trademark Mudhoney sounds and played them at the wrong speeds. Definitely an interesting start to the album. Mark Arm gets political on the next track as the opening line ‘Robots and aliens, stealing jobs, they’re bring drugs, they’ll rape your mom…” makes obvious reference to the US president’s infamous speech about Mexican’s when trying to gather support for his border wall. Other current and political targets are there for the taking too, with the self explanatory ‘Please Mr Gunman’ and the social media forewarning of ‘Kill Yourself Live’ coming across like a 21st Century version of My Brother The Cow classic ‘Into Your Shtick’

‘21st  century Pharisees’ starts off sounding like it could be the first upbeat track of the album, but the first words are “Evangelical hypocrite…” you sense that might not exactly be the case, which ends up being true.  ‘Prosperity Gospel’ is another deeply political track railing against capitalism, and similar to closing track ‘Oh Yeah’ brings back that classic fuzzed up sound that they made their own back on their early albums. While maybe not as evident on this release, Mark Arm’s voice seems to be a strong as ever and the band, who have only had the one line up change in their career are a tight unit that have been working together long enough (this line up has been around since 1999) to be able to come back after a long break and take off where they left off.

Whether it’s the grim apocalyptic outlook of ‘Next Mass Extinction’ or the Trump baiting ‘Paranoid Core’, Mark Arm and co are as cynical as ever, with darkly humorous lyrics, with claws sharpened and aimed at their respective targets. The is a more subdued sound and the mix is a little different to the usual fare, but the songs are still unmistakably Mudhoney, and all the better for it. Like Therapy?, who released an album recently, they have been a massively overlooked band since their 90’s heyday, but they have kept releasing consistently good music and this is no exception. The noisy punk edge may not be as evident bar a couple of tracks, but the intent is there in spades. Different but still pure Mudhoney!