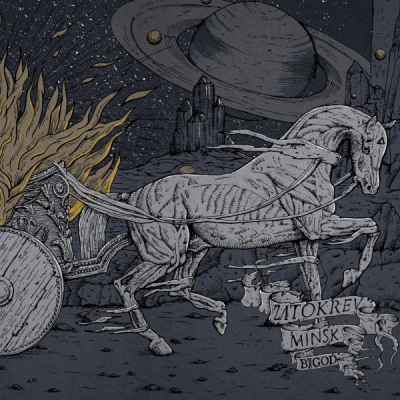 Bigod by Minsk and Zatokrev

A split album has got to have a good balance between the bands – if one is heavier, or darker or just plain better than the other then it can lead to a very wonky listen. We have no such problems with Bigod, though, because this four-track split between Basel’s Zatokrev and Illinois post-metallers Minsk is so damn tight and cohesive that it sounds almost like the output of one band. This is helped by the fact that both bands’ vocalists guest on the other’s songs. Splits are also often something that feature early in a band’s career, while funds are tight(er) and entering into a split release is a way of getting music out without breaking the bank. Yet both bands have four albums behind them, and a combined career of over 30 years.

First track ‘Invoke/Revive’ (from Minsk) hits the floor in full-on Minsk rage mode. A wall of sound and cacophonous bellows from vocalist Christopher Bennett take a minute or so to recede before the music resolves itself into a recognisable structure and sound. This is classic Minsk – a sludgetastic juggernaut carrying the full weight of the pain and angst that their music conveys. The track continues to evolve, slowing in tempo, with guitar melodies emerging, into the thundering stomp of the bleakest sounds this band has to offer. The 14 minute track grinds on, carrying the listener on waves of heaviness. I use the metaphor waves deliberately – their music often reminds me of a stormy sea, epic in scale and full of danger, possibly because of an earlier favourite track of mine from 2009, ‘The Shore of Transcendence’. The tempo picks up towards the end with a fabulous guitar hook that spirals through the heaviness and rage. Possibly one of this band’s best ever tracks.

There’s an atmospheric start to Zatokrev’s first track, the 13-minute spic ‘Silent Gods’,  providing short-term respite from the crash and draw that has gone before. The contemplative guitar builds, though, and a new tumult arrives. Zatokrev’s heaviness and portentous sound is distinctly their own but it mirrors Minsk’s very well, and the rage is twofold now. Zatokrev use silence and calm to create tension in their sound, the spaces in their music making the imminent intensity all the more dramatic. As they reach their crescendo on ‘…Gods’ it’s clear that these two epic tracks – amounting to almost half an hour of music – fit very well together. The chanting at the end of the track sounds like a meeting of vocalists, joining Minsk and Zatokrev as one.

Both bands have one more track, both much shorter. Zatokrev’s ‘Salvatore’ is a dark, brooding affair, full of strummed chords and far off voices. The swell of the guitar reminds me of Sunn O))). Minsk’s ‘The Chalice and the Dagger’, the final track, is full of plaintive vocals and melancholy guitars. Towards the end it segues into a sample from the story by Dostoevsky, The Dream of a Ridiculous Man, about a man slipping into nihilism after deciding that there is nothing of value in the world. This seems to fit Minsk’s outlook rather well and concludes this superb exploration of dark themes.

This split has both introduced me to a new band for me, Zatokrev, and made me eager to hear new material from an old favourite, Minsk. Initial impressions of this split album as just four songs, or just a split should be cast aside. This release stands up strong as a cohesive whole – dark, compelling, powerful, bleak and fantastically heavy – and both bands have worked to make it a unified release where the songs complement each other very well. Some albums by single bands don’t hang together this well. A must-hear for fans of any type of post-heaviness.