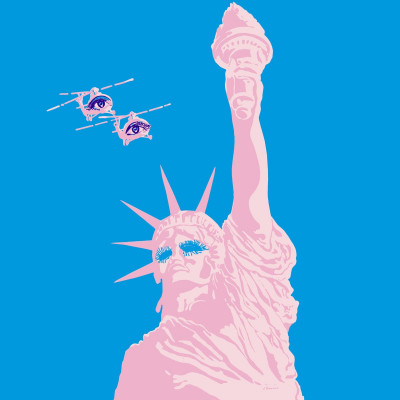 It really does seem an age since the delightful sounds of Les Big Byrd have been heard, and one could almost be forgiven for thinking that after that excellent debut album which seemingly came from nowhere, they might have run out of ideas. It’s with great excitement, and a little trepidation that we find ourselves with a new album which may or may not answer whether the wait was worth it.

That question is pretty much answered with the first few minutes as opener ‘Gerausche’ shows a band who have not just been busy in the studio, but also perfecting their sound into what can only be described as glorious psychedelic disco. Taking their cue from the lean sounds of New Order circa Technique, their understated, yet buoyantly melodic music is both big and shiny, but also full wry demeanour. Hitting the seam where melancholy mixes with joy, Les Big Byrd turn Iran Iraq IKEA into a life-affirming listen.

The had demonstrated their knack of a “good tune” on that debut, and here on the likes of ‘A Little More Numb’, and later on the persuasively brilliant and addictive ‘I Fucked Up I Was A Child’ they shows that if they had only existed thirty years earlier they would have been making a play for the top of the charts. OK, maybe subversive lyrics aside, and just wait until that irresistible urge to sing along to ‘I Fucked Up…’ starts, and you may find yourself caught between pop heaven and slightly odd looks from passer-bys.

Elsewhere they seek a more tripped out zone on ‘I Tried So Hard’, some interesting diversions into instrumental territory, especially with ‘Pink Freud’, and then later into much more melancholic fare such as ‘Eon’. Indeed, its the way the album flows from full on disco pop, through forays into more progressive music, and ultimately into a state of being on ‘Mannen Utanfor’ that makes this album such an essential listen. It’s almost as if they took their debut, made it leaner, and then pumped it full of steroids. It’s an addictive listen which refuses to leave your ears once those songs have hit them.

It may have been a long wait, but on the basis of this album they can feel free to abandon us for such a time again. This band have it all, through wonderful melodic songs, an uber-cool image, an attitude which reeks of rock and roll, and the ability to make you smile. There’s not much more you can ask for in a band. Les Big Byrd are back, and this time even bigger and better. Its time to fall in love with this band all over again.