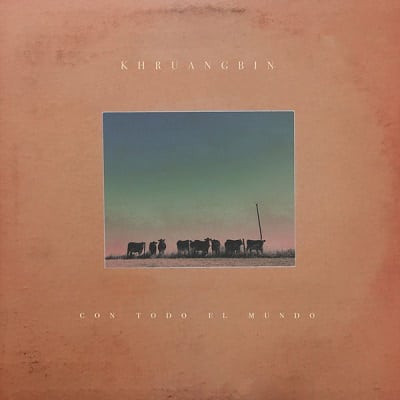 Khruangbin are a trio from Houston, Texas that took inspirations from Thai funk, psychedelic music, and the genre of krautrock. When I first listen to their music on the Echoes podcast, my first reaction was “What is this? This is something different! It sounds like something straight out of Andy Votel’s Finders Keepers label that the trio might have dug into to follow the music in hot pursuit.”

Their new album released this year is called Con Todo El Mundo on the Dead Oceans label. They look like something straight out of the San Francisco scene in the late 60s. Now the album title came from Laura Lee’s grandfather who would ask her “Como me quieres?” (How do you love me?) Her response, “Con todo el mundo” (With all the world).

It’s their follow-up to their 2015 debut, The Universe Smiles Upon You. For me, being new to Khruangbin’s music, I was quite intrigued on the trio’s work after hearing them o John Diliberto’s Echoes podcast which is soon going to be my go-to podcast of discovering not just the history of the bands/artists from the past and present of jazz, world music, progressive rock and electronic music, but the up-and-comers who are following in the same footsteps to carry the torch and making sure the fire doesn’t burn out.

Laura Lee, Mark Speer, and Donald Johnson, Jr. are making sure that the torch keeps on going and going. ‘Como Me Quieres’ sees Donald’s drumming, Mark’s funky guitar, and Laura’s soothing vocals, make you want to open the doors to a new world that is fresh and exotic with escapism to get away from the big city. I can hear them paying homage to masters of Serge Gainsbourg and Shades of Joy’s alternate score to Alejandro Jodorowsky’s 1970 cult classic western, El Topo.

‘Como Te Quiero’ is a cross between Os Mutantes and the Take Off-era of Jefferson Airplane. Laura’s underwatery arrangements take you into the oceanic landscape while Speer’s bluesy guitar gives a sign of relaxation. With ‘Evan Finds the Third Room’ the trio are flying across the Mothership to lay down the funk.

Donald goes towards some hip-hop rhythms on the drums and I can imagine George Clinton of Parliament Funkadelic being very pleased and surprised of the trio as they tear the roof off the sucker. And then on ‘A Hymn’ makes you embark towards Khruangbin’s psychedelic gospel church. It is filled with joy and happiness that the trio take you inside the room with a mellowing atmosphere to get away from the big noises with a soul-jazz melody.

‘Friday Morning’ which closes the album, is Khruangbin’s answer to Frank Zappa’s ‘Watermelon in Easter Hay’. But then it changes into a Tropicália-psychedelic groove that makes you swirl and dance into this odd change signature between the Brazilian samba and a bluesy late ‘60s vibe with some mellotron to fill in the gaps. Now this album didn’t grab me that much, however I could spot some very interesting touches that Khruangbin carry the flag. But they are very good and they have done their homework very, very well and capturing that spark.