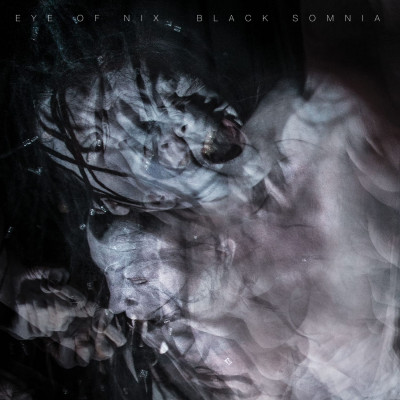 Black Somnia by Eye of Nix

Black Somnia is Eye of Nix’s second album, and it was produced by Billy Anderson (Bell Witch, Pallbearer) in Portland, Oregon. The album explores fear, control and anxiety through a ‘lens of blackened psychedelia and doom’. That it does. The distorted, screaming figure on the cover conveys this message and theme very effectively. Intro track ‘Wound And Scar’ backs this up tenfold with a jarring and very unsettling 7 minutes of frenetic drums, pummelling doom riffs and frequent tempo changes, all underpinned by the tortured howls of vocalist Joy Van Spain. It takes some time for the track to resolve in the listener’s mind, because at first it’s hard to get a grasp on any one element of the song. Repeat listens help peel away the layers of the onion.

Joy sings in clean style on some tracks, which creates an interesting counterpoint to the noisier tracks on Black Somnia. Heavy, doom elements shine through even so, as on ‘Fear’s Ascent’ when the operatic vocals build in time with the heaviness of the slow guitar. The use of two distinct – indeed, wildly different – vocal styles does give the impression at times of two different bands competing for breathing space. The progressive elements that go alongside the cleaner singing style sometimes feel like they belong to a different album than the face-melting likes of ‘A Curse’ or the opener.

Highlight for me is ‘Lull’, which I really enjoyed. There’s a feel of 70s prog rock epics here in both the vocal delivery and the guitar tone and progressive riffing. This is followed by the rather beautiful ‘Toll On’, a slow build in which Joy’s vocals soar above a rumbling bassline. The album is bookended by two brutal tracks: the aforementioned ‘Wound And Scar’ and closer ‘A Hideous Scar’, in which Joy’s evil twin surfaces once more to serve the band’s heavier tendencies.

There is some interesting music on Black Somnia, with the initial impression of an uncompromising metal assault giving way to some really complex and fascinating progressive sounds with bags of enduring melody. At times it’s like listening to two cats fighting in a bag, leaving the listener to wonder which one will win overall. Eye of Nix’s best music is ahead of them, I’m sure. With many bands out there successfully marrying heaviness and extremity with more melodic explorations, this band can, I hope, come to resist the urge to throw everything into the mix. Then they can tease apart the different strands of their sound and create a more cohesive whole in future releases.