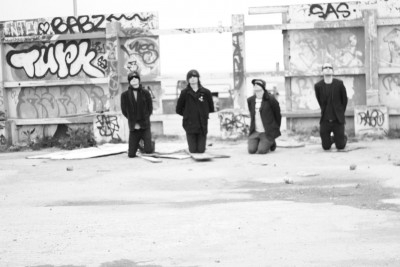 The 10th November holds significance for a great number of reasons. It’s said to be the date upon which Henry Morton Stanley greeted a previously AWOL explorer with the now famous phrase “Dr. Livingstone, I presume” and, in 1989, it was on this day that the Germans began tearing down the Berlin Wall. For 2018, however, this date marked the live premiere of The Academy Of Sun’s latest opus – The Quiet Earth.

In a bid to avoid the anxiety of post-release thumb twiddling, TAOS opted to plunge immediately back into the studio after sending 2017’s Codex Novena out into the world. The resulting record was then performed in a Brighton church complete with an 11 strong orchestral and choral ensemble who helped to fill the eaves with delightful sonics. In addition to this there were specially commissioned video-mapped visuals from artist Ece Polan Budak, a live performance from the gothic folk drone of 21 Crows, and an ethereal shroud formed by Seance DJs – James Papademetrie and Pete Wings.

November 10th also happens to be the birthday of a number of intriguing characters. These include the seemingly unaffiliated trio of Ennio Morricone, Screaming Lord Sutch, and Igor Dmitriyevich Novikov (a Russian theoretical astrophysicist and cosmologist). Whilst these three Scorpios initially appear to have very little to do with one another they do serve to form an unusual triumvirate that strangely helps to triangulate the approach of the restless troubadour at the helm of The Academy of Sun – Nick Hudson. Nick is an irrepressible artist and Russophile whose talents have spanned fields as diverse as film-making, score composition, poetry, and prose. Not to mention an intimidating back catalogue of albums that he has released both under his own name and that of TAOS. He has furthermore taken to delivering lectures, you know, in his spare time. And, as there’s clearly more hours than just 24 in the day, Hudson is also currently performing as a live member of the touring line ups for both Toby Driver (he of Kayo Dot fame) and the recently reformed ASVA as they head out overseas.

The music of TAOS is both beguiling and contradictory. It’s capable of being simultaneously pompous and understated. It confounds and reassures. No matter the direction it is driving in it is somehow always enticing. New single ‘The House’ – which Nick and his fellow faculty of the Sun have kindly allowed us to debut below – is no different. It’s a soaring call to arms that blends resilient acoustic guitars with driving rhythms and a solemn tour of literary trinkets pertaining to vanquished futures. Those who engaged with Codex Novena will relish the progression and expectedly experimental posturing of this new record. The Quiet Earth takes the ground work of tracks like ‘Some Boys Like Thunder’ and expands this further into lapel-grabbing, pop charm. It shifts from the operatic post punk infectiousness of ‘So What Caravaggio’ to the outré sensibilities of Ariel Pink and Scott Walker on ‘Ghost Foxes’ and ‘Couch Surfer’ both of which whip up into something quite majestic.

Due out early next year, The Quiet Earth is a tinder box of curiosities. Trading predominantly in the smallest of fry it takes the rubicon of the apocalypse as its starting point and it expands thematically from there. It encompasses field recordings, narration, and dialogue over the course of 22 songs of grace, compassion, and hope. In addition to this, included with each copy of the release, is a 3d dodecahedral sigil card that happens to map out 12 sites of significant geopolitical shift. These incorporate the Project Trinity test site in New Mexico, the location of Pier Paolo Pasolini’s murder in Rome, CERN in Switzerland, and the Millennium Hotel in Mayfair where Alexander Litvinenko was poisoned. TAOS are encouraging those who pick up their album to assemble these cardboard orbs, transport them to a place that they perceive to be of prominence, and then to film the ritual burning of the sigil. The videos and locations of these cremations will then feed back into the conversation and could result in the construction of further sigil cards that will then augment exponentially. Already these have been placed in the hands of the likes of minimalist composer Terry Riley, the head of the London chapter of the Satanic Temple Zeke Apollyon, and vocalist/composer Carisa Bianca Mellado. They have also spread as far and wide as Scotland, the Alamut site in Iran, and Fukushima.

Apparently this still hasn’t sated Nick’s thirst for hypermedia cross-pollination. Following on from the show on the 10th, The Academy Of Sun will now be supporting Mogwai and The Twilight Sad on 25th November at the Brighton Dome. To miss this one will be tantamount to self-flagellation.