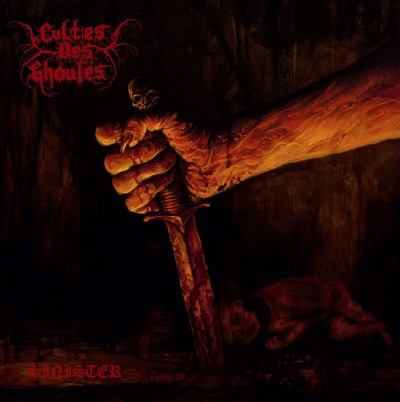 Sinister, or Treading the Darker Paths by Cultes Des Ghoules

It’s easy to get lost in the overcrowded marketplace of black metal traders. While many offer wares of genuine occult power, ancient treasures laden with gems, or sacred reliquaries protecting the blackened bones of tyrants, other products are quickly identified as cheap, plastic trinkets, destined to lie spurned in the gutter. But Cultes Des Ghoules stand out like the (Un)Holy Grail.

It’s unlikely that Indiana Jones listens to black metal, but, nevertheless, you know the real deal when you hear it. Formed in Poland some fourteen years ago, Ghoules have become best known for Coven, or Evil Ways Instead of Love, their last and much-lauded opus from 2016. This magnificent, epic, which sprawls three records and almost 100 minutes, is an obscure kind of concept album, with the voices of various bizarre characters appearing across five huge tracks. Using black and roll, traditional metal, and lavish, sour orchestration to convey atmospheres of Gothic romance, vaudeville theatre and the Victorian stage, Coven is a majestic metropolis of phantasmusic, which is hard not to see as Ghoules’ masterwork.

If in doubt, go back to your roots. Sinister, or Treading the Darker Paths, the band’s fourth full-length release, reclaims something of the raw nastiness from the band’s demos and early EPs, but maintains some of the grandeur they developed on Coven. Definitely a wise move. And those demos are raw. So raw you can practically hear blood and cancer in the spools of the tape. Sinister is still very much a theatrical, avant garde album – it’s what Ghoules do – but the instrumentation is slightly more stripped back. With Sinister, we’re still talking just five tracks, all lasting over ten minutes, and – as with Coven – the long-form song really works in their favour.

To me, Sinister is characterized by three distinctive elements. Firstly, buzzing, uncluttered riffs that are allowed to build and build in hypnotic, droning patterns (most notably on first track, ‘Children of the Moon’, subtly embellished with eerie synth). Secondly, bass playing that is lithe, intricate and often leads the way, melody-first, through the song. Lastly, Ghoules’ deeply idiosyncratic vocals, moving from Urfaust-esque operatic wailing, through intimate gurgling throat sounds, darkly theatrical intonation, and proud, arrogant growling.

‘The Woods of Power’ builds slowly with two-chord punky riffs and demented babbling over sustained synth—then kicks in with some mid-tempo black ‘n’ roll groove and vocals of reminiscent of Atllia Csihar on ‘Funeral Fog’. On ‘Power’, there’s a rising, droning noise from the synth, like the whine of electric saw or drill, fading into feedback. The guitar tone on ‘Day of Joy’ is noteworthy, sounding like the trebly tones of a single coil; given that Strats or Telecasters aren’t fashionable in extreme metal, this tone cuts through the mix nicely, and somehow compliments the overall sense of strangeness.

Probably my favourite part of the album occurs about eight-and-a-half minutes into ‘The Serenity of Nothingness’ when a bass line/solo appears from out of nowhere, catching you off-guard. With almost the feel of a walking jazz line, it’s the jaunty off-kilter rhythm combined with a “pots and pans” drum sound that you’d expect to find on a Tom Waits song but not an extreme metal record. On closer ‘Where the Rainbow Ends’, murky samples of devilish incantation mix with slowly descending powerchords, that whining synth returns, tremulosuly rising across your soundspace and gradually falling into nothing.

Sinister was mixed and mastered by Polish black metaller Mgła, their vocalist M. having performed on Coven. Ghoules don’t sound much like their mysterious countrymen, but have maintained that much-coveted sense of anonymity and mystique about them. Following the tradition of Darkthrone, Bathory, Burzum, and many other bedroom black metal projects, Ghoules don’t play live. As mainman ‘Mark of the Devil’ affirms in interview elsewhere, “We have never played live nor we have any plans to do so whatsoever.” While it’s frustrating to think that we’ll never hear Coven performed in all its glory (at Roadburn, say, with live strings and guest vocalists to play the different characters…), Cultes Des Ghoules make for a fine studio-only band, always providing works that you’ll listen to over and over again, always hearing something new and disturbing deep in the mix.

Cultes Des Ghoules take their name from a book of black magic in the ‘Cthulhu’ mythos of H.P. Lovecraft, one of hundreds of bands around the globe to draw inspiration from the Weird Fiction maestro. The bleak atmosphere, hybrid alien-gods and bizarre madness of Lovecraft’s fiction is well-suited to extreme metal, which has provided a melting pot for all sorts of marginal sonic experimentations over the years. And Ghoules is just one fictional grimoire that Lovecraft describes in the series, alongside the Unaussprechlichen Kulten, a name taken by one of Chile’s finest and grottiest death metal bands, while Metal Archives lists ten bands who take their name from Lovecraft’s most famous, the Necronomicon. Yet Ghoules are truly strange enough to do the reference justice.

So, when perusing that marketplace, you’ll find few trinkets as idiosyncratically interesting or authentically weird as Cultes Des Ghoules. Sinister may not be the band’s Holy Grail, but, nevertheless, to taste forthwith is truly to sup with the devil himself.