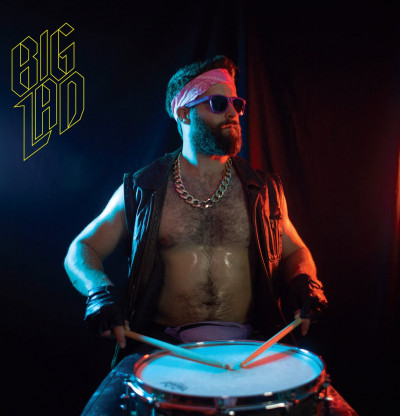 ‘Ricky Balboa’ builds and twitches for a minute before it properly kicks off, all splintering beats and hyperactive synth surges, a heart pounding chase scene around the inside of your own head. The Big Lad sound is at some messy mid point between Lightning Bolt’s percussive noise-core and Venetian Snares’ wild, frying electronics. Only more fun. The edge of menace replaced with a recklessly excitable grin urging you to let your guard down, dance like an idiot, do another round of shots, stop worrying for five minutes.

Big Lad came about a few years back when powerhouse drummer Henri Grimes reckoned he could play drums to Wayne’s ludicrous breakcore jams. Breakcore being a genre largely founded on using chopped up drum loops to create demented rhythmic patterns beyond the abilities of any mere human it seemed an unlikely idea. Still, having made a pretty decent fist of the whole thing they made a record. They called it Big Lad. Back then they called themselves Shitwife. Now, you have to suspect that being called Shitwife closes more doors than it opens, so now the band is called Big Lad. Maybe they’ll be called Pro Rock on the third album. Maybe not.

The smoulderingly sexy portraits that adorn the cover – sweaty Henri in bandana and waistcoat, Wayne in a spectacular fringed affair penned in by synths like an evil prog wizard – should probably have tipped you off that Big Lad share the piss taking love affair with pop culture of the true fan, and it’s all getting fed into the grinder. There’s techno, hardcore, metal and blockbuster movies in there and although the aesthetic is pretty basic on the surface the range of sounds they use is surprisingly broad. There’s a lot of nice 80’s synths – the lovely wonky stabs on ‘Banana Split’ being a particular highlight. ‘Ted Banger’ is a pulsing, pulverising onslaught of filthy bass, ‘Donald Tramp’ a thrashing migraine of Melt Banana noise core.

It’s not all hyper ventilating bludgeoning though, far from it. There are constant shifts of pace and emphasis that keep the full on sections hitting hard not grinding you down. ‘Michael J Decaprio’ is a slower number, fractured and dark with a dripping sci-fi unease about it. It’s that moment when you come out the toilet in the club, realise you can’t find any of your mates now and you’re really not cool with it. It’s followed by ‘Party Salad’ one of a couple of lulling synth interludes that add some breathing space and wouldn’t be amiss on the Stranger Things soundtrack. In fact Pro Rock‘s mix of 80’s vibes, weirdness and spastic beats is like the anxiety dreams of the Stranger Things kids, shovelled full of Ritalin by well meaning therapists, waiting five years for the rave scene to arrive so they can finally calm down.

In case you were still unclear what was going on the final track is called ‘Eating Food and Fighting Wizards’, it has the riff and chug of hair metal in it’s bones and sparkly/nauseous synth leads in it’s luscious mane of metal hair. It’s a thrash-pop great grandchild of Van Halen’s ‘Jump’ and that’s obviously a good thing. Pro Rock is chock full of twisted party bangers then, assuming the party has already gone on too long, only your most wasted and degenerate mates remain and stopping is now out of the question. Ludicrous and absolutely banging, it is also good for housework. Get on it.