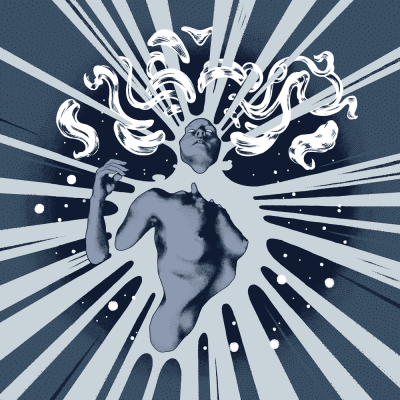 The beauty of Bast is its skill to manipulate a number of genres to produce music that can switch direction with great ease and stunningly coherent results. Wielding post-metal, doom and black metal, sophomore album Nanoångström continues on the path laid by the critically acclaimed debut Spectres. Musically it doesn’t distance itself too far from the last release but this is no bad thing considering its quality. The album is an exploration of “loss, isolation, and change in the wake of time’s passage” through long compositions of calculated experimentation which remain focused and produce numerous moments that are neck achingly catchy.

Outside of the intro track you are treated to five songs each stretching around or over the ten minute mark. This allows each song to span out and live through the themes of the album and they are executed perfectly. The level of experimentation is palpable and there is a seamlessly controlled manner that keeps the focus of the song even when running into a different pace or style. ‘Far Horizons’ starts with a riff that sounds like a more urgent Amenra before the vocals come crushing in to change the density of the music as a gloomy atmosphere engulfs and takes over. The use of dual vocal styles gives another dynamic between deep guttural and cleaner screams and they are orientated as the music gathers pace or recedes to the depths. The song breaks down in the midsection before a lighter tremolo riff lifts the pace before accelerating into a blasting second half.

The instrumentation comes across as the main focus of the album and vocals are used to shape a theme before the music develops that narrative. ‘The Beckoning Void’ features vocals from Chris Naughton of Winterfylleth and has one of the more sudden changes as, when you least expect it, the vocals kill the song to repeat “We, we will die….” As this line repeats one of the most uplifting guitar sections on the album begins to fold out which seems to lift the spirits of the fallen heavenwards.

Each track starts with a different sound and ‘A Red Line Through Black’ begins with dark doomy riffs and slow pounding drums which dominate a track that also features some of the best vocal work on the album. The title track starts with flashes of psychedelia before it builds into some doom tinged moments before converting itself into a driving blackened riff. Tying everything together is the epically titled ‘The Ghosts Which Haunt the Space Between the Stars’, which manages to embrace all of the above and then some in a seamless shift of tempo and style.

It may have taken four years from the last album but there is an effortless joy to the music, it never sounds cobbled together but planned, jammed and nailed. There aren’t many bands like Bast and there are certainly few as good. Nanoångström is a cracking listen and a great addition to band’s catalogue. My only worry is that if they take another four years for the next album then I will be closing in on my 40th birthday, that’s probably higher than the life expectancy for where I live in Glasgow!