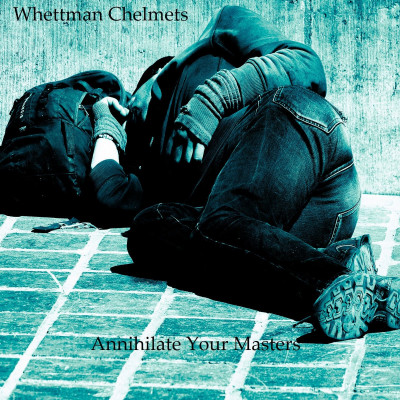 Whettman Chelmets is a one-man alter ego and sole creator and performer of everything on this album. All tracks were recorded in his living room over a period of three years, and it’s a concept album of sorts. Annihilate Your Masters deals with the ideas of “servitude, inevitability, and resignation”, the song titles tracing a path from understanding the problem to a decision to act followed by the realisation that nothing can be changed after all. In other words: the same ol’ same ol’ will grind you down and shit don’t change, so live with it.

The six tracks don’t play like songs. Rather, they’re like parts or movements of a classical piece, not having the traditional start and finish of separate songs or a verse/chorus structure (there are no vocals to speak of). They sit well as part of the whole, each short element enacting part of the theme.

There’s an intensity that runs throughout Annihilate… from the snatched spoken word samples of opener ‘Preparation (Thesis)’, overlain by a pulsing drone, to the grinding riff of call to arms ‘Annihilate Your Masters!’ and the glitchy, paranoid throb of ‘Lashing Out at the Antithesis’. The track titles take you on a journey, as does the music – the patchy voices on the first track sound like the clamour of modern life, the daily grind.

‘Annihilate Your Masters!’ shows resolve to rise up followed by the dawning realisation that nothing has changed, with ‘New Masters, Same as the Old’. The guitars and pounding drums on ‘Annihilate…’ are as in yer face as it gets, while ‘New Masters…’ uses gloomy 80s-style electro pop a la Jesus and Mary Chain or Killing Joke to keep up the tension. There’s a glimmer of hope given by the lighter tracks ‘Lashing Out at the Antithesis’ and ‘Inevitable Synthesis’ which lift the spirits brought on by the glowering first half of this short album. Final track ‘Resignation’ kind of takes us back to the start with a return to snatched conversation and a noticeably more hopeful tone. Acceptance of the situation, perhaps?

Whettman Chelmets takes us skilfully on a journey through his thought processes, telling a story and mirroring the plight of us modern-day worker bees by manipulating the sounds and instruments at his disposal. Sonically and musically there’s a broad spectrum here, from droning ambience to uplifting synth pop to heavyish post-rock. The work is an odd little nugget, standing at just 20 minutes and making you want to play it again just to see if you heard it right. It does all sit well together, playing more as a suite than a set of six separate songs. I like the fact that it breaks the mould and ploughs its own furrow. An interesting listen for those who want a break from the musical norm.