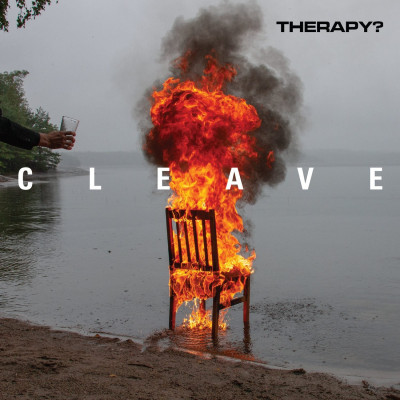 Fifteen albums in thirty years is quite some going. Even with minimal line up changes that Therapy? have gone through during that time, it’s still a very prolific rate given the bands heavy touring schedule and frontman Andy Cairns acoustic shows as well. With Cleave the band have launched the latest phase of their career with new label Marshall Records. Following up the excellent Disquiet from 2015 was always going to be a challenge, but one that the band seem to have thrived on.

This latest collection opens with ‘Wreck It Like Beckett’ harks back to their early albums with the minimal, almost claustrophobic sound that made everyone take notice of them back in the early nineties. The lyrics are as dark and cynical as ever but wrapped around the type of melodies that made them chart and Top of the Pops regulars. ‘Kakistocracy’ is a fine example of this with its “its OK not to be OK” refrain and lead single ‘Callow’ which deals with depression, a common theme throughout the album, as it proclaims “if you take my demons, you take my angels too”. So far its exactly what you would expect, and new at the same time.

‘Success, Success Is Survival’ is about as upbeat as you will get on this album, with a more melodic approach than the bite of the other nine songs on here, but then its back to normal with ‘Save Me From The Ordinary’ and its opening line of “Life has punched me drunk, and now I’m all blacked out” bringing you crashing back down to earth. ‘I Stand Alone’ and ‘Dumb Down’ are another couple of old school sounding tracks with moments that could easily have come from the Nurse era. In what seems no time at all, you are at the end of the album and only ‘No Sunshine’ left. On this track they expand on some of the less frantic elements of the record up to now, whilst against dealing with depression again and doing it a way that is very open and honest. They have a way of writing songs that really get to you, and this is another fine illustration of that..

What were once albums full of youthful angst, now have transitioned seamlessly into frustrated adulthood and middle age and a “haven’t got time for your shit” attitude as evident on ‘Crutch’. Therapy have managed to keep their identity and trademark sound whilst evolving and bringing elements from influences as diverse as Stiff Little Fingers and Joy Division with some huge riffs thrown in for good measure. With many bands an album like this would be a career highlight, but with Therapy?, its another 33 minutes of excellence in a career of ridiculously high quality albums. Their website says “We are Therapy? helping the afflicted since 1990”, never a truer word spoken.