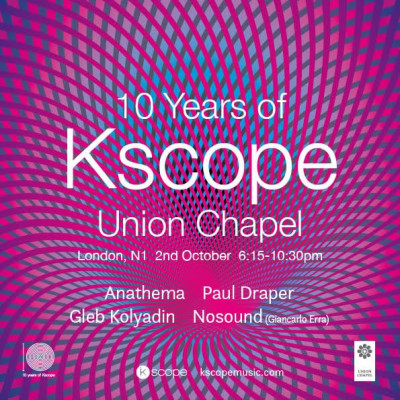 It’s hard to think that as recently as 2008, Kscope was just a vehicle for one band, and one man. That band were Porcupine Tree, and the central player on most of the early Kscope releases was its lead singer and founder member, Steven Wilson. At the time, Porcupine Tree were critically acclaimed, but something of an oddity in a rock music scene that was still in thrall to Britpop and reeling from the impact of electronic dance music crashing the top of the pop charts. Here were a band offering something more expansive than their peers: thoughtful and contemporary, but still heavy enough to fall somewhere around the fringes of metal’s ever-expanding empire.

The label provided a home for Wilson’s prolific output: lush sonic collaborations with Tim Bowness, as No-Man, and more song-based indie material with Israeli star Aviv Geffen, as Blackfield, alongside a debut solo album of icy synth based sounds from Richard Barbieri, formerly of Japan. With 10 years of Porcupine Tree related projects already under its belt, it was a decade ago that Kscope expanded its initial remit and began signing up the best music from the resurgent progressive music scene, and beyond.

The bands added to the label a decade ago shared something of Porcupine Tree’s DNA: Pineapple Thief, Anathema, Gazpacho and Engineers joined the party, each with a similarly distinctive sound, and suddenly a clutch of bands without a scene started to coalesce, intentionally or otherwise, into something noteworthy. Each of these early acts would go on to find greater success as the label became the spearhead of the progressive renaissance.

Adopting the tag of “post progressive sounds” allowed Kscope to hark back to a bygone era without ever opening themselves up to criticism that this new musical movement was merely re-treading past glories. The influence of 70s’ prog rock was evident in many of the label’s first outings, and is still discernible to this day. Crucially, this is paired with 80s’ electronic, post-rock, ambient and psychedelic sounds to ensure the label remains at the forefront of progressive music in 2018.

Since those early days, there’s been an embarrassment of riches to pick from: Ulver, Katatonia and Godsticks have all made appearances, delving further into the heart of darkness. The label’s now established enough to call in releases from a list of artists most indies would stand no chance of working with: Pink Floyd, Tangerine Dream, Ian Anderson, Paul Draper (plus a Mansun reissue programme) have all now released on the Kscope. Releases are promoted to perfection –  journalists and those in the industry oft as excited by the label’s announcements as the wider record-buying public.

Part of the appeal is the selectiveness of the label’s output. Put simply: if Kscope are releasing it, it must be good. This has led to the label having fans in the same way that bands do. Simply being signed to Kscope represents a step up in many artists’ careers. Once such band who have benefited from increased exposure following their signing are Russian chamber prog duo iamthemorning. Their Lighthouse album, released in 2016, topped many end-of-year polls, but would have been heard by a fraction of the audience it ended up garnering had it not been released by Kscope.

iamthemorning should be one of four acts picked to celebrate this, the label’s 10th anniversary as a fully functioning outlet. Alas, the following statement was released by Marjana Semkina, the band’s singer, on the Wednesday before the show: “After spending past few years working as hard as I possibly could to qualify for Tier 1 Exceptional Talent visa and even managing to earn an official endorsement with Arts Council England, my UK visa application still got turned down after months of waiting. I am pursuing the goal of moving to the UK to expand my career which means I can’t work with standard visas like Gleb does, therefore with deepest sadness I have to announce that I must withdraw from Kscope Anniversary Show. I will most certainly try again and eventually I will get there, but for now, I’m giving up the stage for Gleb to shine.”

This news represents a blow to Kscope’s 10th birthday celebration, featuring arguably the best line-up of modern prog away from a festival bill. That Knifeworld’s Charlie Cawood was due to guest with the duo makes this even harder to stomach. Gleb Kolyadin, meanwhile, will still perform his solo piano show, and judging by his stellar eponymous debut album, released earlier this year, it should be a treat. Blending high concepts with jazz, romantic, classical, and more avant garde sections, it features a superb musical cast, including guest spots from Gavin Harrison, Steve Hogarth and Jordan Rudess. With Kscope promising surprise appearances on the night, it wouldn’t be beyond belief for this set to feature some unannounced accompaniment.

Also performing on the evening is Paul Draper. Something of a wet dream for the label’s management, Draper has been coaxed out of his reclusive semi-retirement, first to co-produce and co-write The Anchoress’ poppy, accessible Confessions Of A Romance Novelist album, then finally to deliver the coup of his first solo album, Spooky Action. Whilst Draper’s comeback hasn’t been without incident, he and guitarist Ben Sink have proved capable of recreating Mansun’s high points, whilst forging forward with new music featuring his unique melodic style.

With Wilson having released his latest solo record away from Kscope, there could only be one band to headline such an evening: Anathema. Throughout their transition from death metal band to alternative rock overlords, the Liverpudlians have always done things their own way, and this single-minded ethos sits well with Kscope’s boundary-pushing approach. The band first appeared on the label in 2008 with Hindsight and have released all their albums since this on the imprint, including last year’s stunning The Optimist. The group are partially such an exciting live proposition due to effectively having three people vying to front the ensemble: Vincent Cavanagh’s vocals are strident and upfront, his brother Daniel brings a more emotive strain, whilst Lee Douglas has a voice as soft as velvet yet as powerful as steel.

Taking place in the confines of Islington’s Union Chapel ensures that the acoustics and setting for this gig should be as memorable as the music. The Gothic revival building is still an active place of Congregationalist worship. No doubt Kscope’s celebrations will create a different kind of religious fervour. Here’s to the next 10 years!