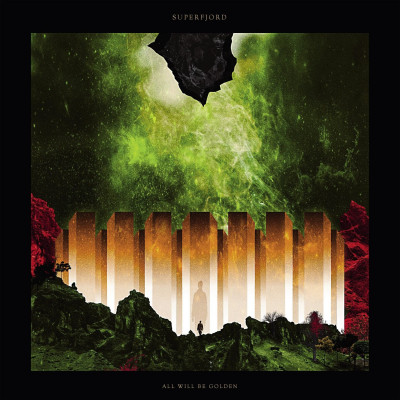 All Will Be Golden by Superfjord

Superfjord seem to have picked up something of a critical following after their debut release and a series of singles on Fruits De Mer. With their bubbling, easy head-bobbing sound which takes in the indie psych of Tame Impala with a more trance inducing sound born of Kraftwerk, they provide an easy access for those who want to dip their ears into some psych and prog without ever having to actually delve right in.

Outside of this, is there really anything of interest in this band, that could take them into something much more substantial that the thought of remaining the band the critics love? Well, yes and no really, and new album All Will Be Golden kind of sums it all up. At times gloriously uplifting, other times heading straight for the weirdness section, through it all remains an unnerving feeling that it is all too calculated.

To a full on psych head this may be anathema, and Superfjord may find more success with the prog listener. It’s this dichotomy which confuses though, and you wonder just what type of band they want to be. Their easy action melodies are great, and you find yourself dancing along. It’s during that moment on second track ‘Master Architect’ when you realise they have just lifted the riff from the first track and remixed it with a different sound that you wonder whether they have anything else in their bucket. The confusing thing is that they are so damn good at what they do that you kind of forgive them. It’s when they turn up the trip that you think, OK here’s a band we can get along with.

‘Rainbow’ presents a more urgent sound which features some great vocals, but it is the full on prog of ‘No Rest For The Wicked’ which becomes the apex of the album. A gloriously pompous song, with a cool disco jive, they may slip again into the ease of a repeated motif, but this time you are with them for the ride. ‘Parvati Valley’ offers some respite from the incessant melodies, although within time that too dissolves into a repetitive freak-out. It is left for the lovely ‘Rainha de Floresta’ to provide some blissed out feelings after an album which pretty much bludgeons you into submission.

Whilst there is nothing inherently wrong with this album, it does have a tendency to become very tiring due to its very nature of repetitiveness. At first each song sounds excellent but soon descends into a boring malaise. We don’t do ratings here at Echoes and Dust, but if we did this would be the epiphany of a three out of five. Interesting, but boring at the same time.