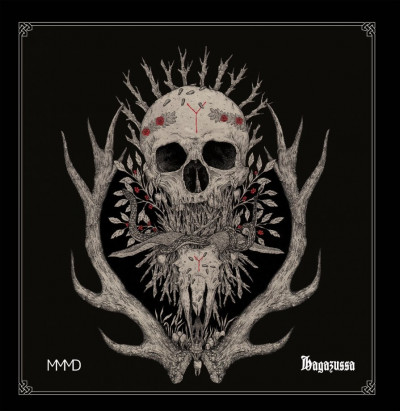 Hagazussa: A Heathen’s Curse by MMMD

Since Philip Glass’s 1978 score for Koyaanisqatsi directors have sought to employ surging throbs to help distill and accentuate their stories. This year Colin Stetson’s brass bursts in Hereditary and the ambient washes in Scott Barley’s Sleep Has Her House have flown the flag for the unmistakable sound of drone. And now, with Hagazussa: A Heathen’s Curse, the first feature length film from writer/director Lukas Feigelfeld, MMMD have also picked up the baton.

I first crossed paths with Mohammad (now stylised as MMMD) on 2014’s Lamnè Gastama. Their fluid combination of roaring, low-end strings and ambient murk proving to be a glorious cocktail for my drone-seeking ears. Their sounds focus in on the infinitesimal. Each rivet of a string, each frayed hair on the bow. Their point of conjunction forms a blend of bite and sorrow. On this record’s third track ‘Sagaraki De (Hagazussa version)’, the growing sounds, accompanied by the lost words of the wind, paint pictures of twilight hills, robes in moonlight, and the skid of rain upon a muddy slope. This is a soundtrack that reeks of its imagery. I may not yet have seen the film but the visions are stark and present. Here are warnings of dread and danger.

Similarly ‘Akvo Kat’ opens with notes of doubt, of suspicion. Evoking the aftermath of a night’s bad deeds as the sun fails to rise through the morning mist. The bowing of cellos is steadfast and sombre. Occasionally there are lashes out into brighter patches but these soon disappear into the thunderous mire. Each instrument is knee-deep in the viscous bog. A primordial ooze that cakes the wood and metal, coating the sounds with that which may never drip. And on ‘Jou a syèl la louvri ak lapli dlo nan je’, which, according to Google translate, means “The day of the sky is opened with tears of rain”, the weight pushes further on. Bears down. Such pressure moves this from the ominous into abject horror. These are not sweet sounds of hope and survival. This is the grainy submission of Begotten. The clawing hands of wretched scum. The swallowing of black tar and the breathing of piled earth. If this film is the Heathen’s curse then it follows that, based on the noise on display here, the curse drags them all the way down.

That track’s companion piece – ’Jou a syèl la louvri, tè a te sèk’ (which seems to translate to “The day the sky opened, the earth was dry“) – showcases sonics that emerge from atmospheric swells and may, initially, seem like singular drones but are, in fact, laced with murmurs, undulations, dense vibrations, and a silvery sheen. The faintest of sliced strings are drawn out like an eye-bulging threat. A finger creeping across a trembling throat. The intensity of an unseen stare. A fear of disturbing. This is the sound of waiting out a fraught and fragmented night, devoid of sleep’s solace. Anticipating the creak of a door or the crackle of deceased leaves underfoot. Ears straining to hear above the frantic chop of your paranoid heart.

This is a democratic record. Not that it is overtly political but more that the listener has autonomy over their involvement. It can be as engaging or as unobtrusive as you wish. It can sink into the background, providing a soothing balm for heavy frontal-lobe tasks, or it can sit with you as you begin to unpick the shimmering nuances that are sifted to the fore by ears attuning to its ancient language.

The only percussion on the album appears at the very start. A booming wallop that draws steadily nearer. Then, like a flame in a storm, it’s extinguished. Deep strings move through phases. Beginning with a singular note, this blooms into two, then three and four. Stretching time and weight before head-flushing bass frequencies mushroom in the final thirty seconds, filling craniums like expanding foam. As the record began, so it finishes, suggesting a cyclical format for both album and film. There is something Sisyphian in this looped struggle. It is quicker getting into the deep recesses, however, than on the opener and the thumps have been replaced by throaty chants which give this the air of a requiem. I think it’s safe to say that Hagazussa is certainly not Paddington 2. This is the myth of Sisyphus as soundtracked by Sunn O))).

Or, for a review in medical terms, this album is so densely potent, it cleared the congestion from my sinuses that had caused piercing pain during air travel. It should be available on prescription.