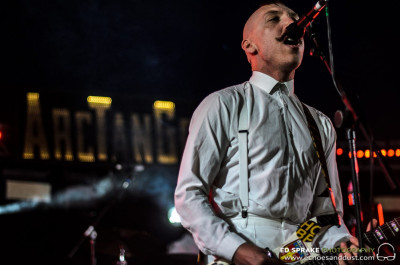 "if you are in a band, even if you are the main or only writer you still have to get it past the other two and you could call that quality control if you like, maybe that's why Muscle Memory went a bit off the rails, but that's what being a solo artists is all about"

Jody Dunstan had a chat with ex-Reuben frontman and now solo artist Jamie Lenman before his storming set at ArcTanGent 2018 to talk about his creative process, life after Reuben, his live show and what keeps him creating music.

(((O))): I firstly wanted to ask you about you creative process, on previous albums you have split styles and really gone to extremes whereas in your more recent work you have gone towards the centre, what drives that process?

Well the biggest thing that drove that process, what you are talking about, to go back to the centre with the last record (‘Devolver’, 2017) wasn’t as much of a decision, if you look what I have done it has always been towards ‘my’ centre, you know, with heavy riffs and big melodies, all the Rueben records were like that and ‘Devolver’ is like that. So the only real choice there was the previous record, ‘Muscle Memory’, where I chose to split it into two and that was because of a desire to come back (because I had been away for a long time) so I wanted the first thing when I came back to not sound like just another one of my records and didn’t want it to me like ‘Oh, it’s Jamie Lenman doing the same old thing’

Yeah, even when we were in the band we thought it was an interesting idea to follow because we’d always done soft stuff and heavy stuff but always on one record. So we thought maybe if we split it out into two records there would be a more uniform listen per disc instead of jumping all over the place .

(((O))): Does that give you a chance to expand a bit more on some of those themes?

It definitely gave me more chance to do that. By the time I did it I wasn’t actually in the band anymore so I didn’t have to worry about what two other people would think. if you are in a band, even if you are the main or only writer you still have to get it past the other two and you could call that quality control if you like, maybe that’s why Muscle Memory went a bit off the rails, but that’s what being a solo artists is all about, I think, if you are in a group everyone has to be happy with it and that has a stabilising effect.

(((O))): Do you think artists are maybe quite constrained in the way that they can write because of record deals or what people want?

Well, not the artists I am interested in, people like Beck and Bjork and Bowie (you know, all the b’s!) People who are known to be creative and every record is different, they just do whatever the fuck they want and they do it because they have all the money in the world and I do it because I have no money! The opposite end of the scales, no one cares what I put on my records and people care about what Adele puts on her records but by the time you are Beck or Bjork it doesn’t matter.

(((O))): Do you find that having social media and that music can travel all over the world very easily get you music?

No, I don’t think it helps at all, we were getting fan mail from Israel and Beirut and all these places back in the band before digital really took off. So that reach has always been there but maybe it was just a bit slower. I don’t pay much attention to social media, I have to say, still I live in the pre-social media world, I live in the 20th century, really. It doesn’t impinge on my steer, so to speak. I think what social media has done is make all music fast and free. So you can get heard a lot easier but because there is so much more competition out there, anyone can make a record in their bedroom and it sound pretty good and put it on Spotify or iTunes for nothing, you don’t need a record deal, so now people can get hold of it the challenge now is to be heard amongst the noise and how to you penetrate beyond that.

(((O))): Awesome, I wanted to ask about your live setup, I know you have being doing things as a two piece (with drummer Daniel Kavannah). What the thought process behind that?

Er, it was really just because when I was writing the new record and they said let’s go out and your it the band I have had before, the heavy/mellow band, was quite fragmented, some relationships in the band had broken down, some people had moved far away, it was always just me and Daniel making the record, so the thought of gathering those people back or getting together a new band really just terrified me the thought of that huge mountain to climb and I started to get, you know, a little depressed about it and thinking, god, that’s too much of a task and then we were having so much fun with me and Daniel tracking the record and it sounded good with just the guitar and drums I started to think you know, Daniel know all the material because he has made the record with me, if there was a way we could do it just the two of us not only would that get rid of my giant workload but it would also be very free, musically, if it was just me and drums i’d be able to experiment a lot more and take things off live without having to check with three or four other people first.

No, he just plays the drums until I tell him to stop (both laugh) So if it is a middle eight bit or if I want to play a different chord or a different version of a riff that suddenly comes to me in the live environment, I can, whereas if I have another bassist or guitarist locked into the same old thing there is no fluidity there.

Yeah, I want it to be as free as possible in terms of time, so I don’t have to rehearse two extra two or three extra people and in terms of creativity as I can do what I want, as long as there are drums in the background. You know a quick nod between me and Daniel and we know what we are doing.

Yeah, whereas if I was in a band I would need to get a form signed, that’s not to say they weren’t great musicians but because me and Daniel have spent so much time together, we just knew each other inside and out

(((O))): Two piece bands used to be a rarity but now it is a lot more common, do you think you lose anything?

No, I don’t think so, not at all. There are all kinds of different setups you know, at the time I started going out as a two piece there was bit of a vogue for them, people like Frauds and Haggard Cat and Super Goliath and we took them all on the tour. ‘Do you lose anything?’, well technically you have lost one guitar but what I am doing now is exactly the same as in Rueben, in that it’s guitar, bass and drums but I am playing the bass as well as the guitar, so it should sound identical to what was happening in Rueben, essentially a three-piece but if I took it just down to a guitar without the bass amp I think that would still have value, I’m not interested in replicating the record perfectly, I think live is its own animal and the freer the better.

(((O))): So you’ve been around for a few years, what keeps you doing it, I assume not for the fame and fortune!

Well, let me tell you I got a free Wagamamas the other day! Basically, I keep doing it because people keep asking me to. I think if there was no one asking, when is the next record out and can you come and play at this festival then I probably would have packed up and in fact the gap between when my band finished and going solo there was maybe four or five years when people were asking when are you going to make some more musician you come and play this gig etc. Without that, I may have never done it again. So it really is that I like making songs and I make songs just for fun, and I will make them anyway but if music isn’t mentioned or talked about I will drift away from that into other disciplines, my illustrations for instance. So it’s just because really people just keep reminding me, keep saying come do this and that.

Yeah, sure, it’s all about the reception. If I played to absolute silence then I would pack it up but as long as there is at least one person saying, ‘good show’ then I’ll do another one!

(((O))): Well, who are you looking forward to seeing over the weekend?

I’m not sticking around but Rolo Tomassi are playing right now, I did catch a bit of Delta Sleep and they were great. I would like to stay for a bit of And So I Watch You From Afar. My buddies Halo Tora are playing tomorrow so sadly I will miss them. Conjurer, I didn’t realise they were playing; I bumped into them they played at 2000 Trees and were fantastic.

Well, now you’re asking…the Black Peaks record is out any day now, isn’t it and that’s exciting and Haggard Cat’s record is fucking fantastic. Well I am really digging the Evil Superstars record from 1998 so I’m 20yrs behind everyone else! That’s my jam!

From me, it’s basically just festivals now until the autumn, I’m going  out to Germany to do a couple of things which I am really excited about. Then we are just trying to work out what we are going to do, I’d like to go out on another tour before the end of the year so at the moment all those discussion are currently.

Well, UK and Europe for sure but I am afraid of flying. So I would have to go to the US by boat! But some more UK and European dates by the end of the year would be a good way to end the year.

Thanks buddy, I need to find my manager and see what’s going on!