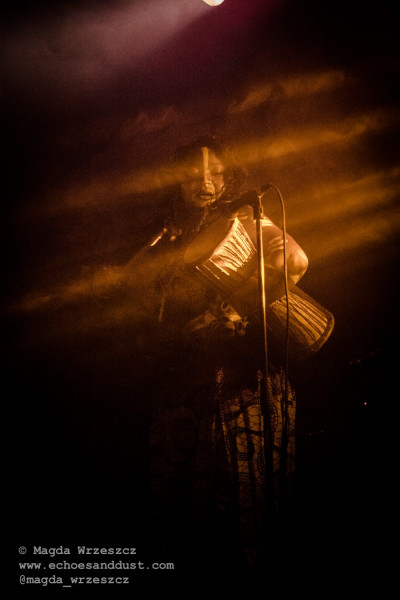 Vodun exploded on to the scene in 2016 with their fearsome debut album Possession. 2018 brings listeners a new ritual in the form of Ascend. It’s even stronger than its predecessor, amping up the grooves and the Afrobeat sound, and presenting a fierce determination to stand against those that seek to divide us with hatred and bigotry.

(((o))): Ascend is your second album in two years. How do you feel it has turned out? Do you feel it’s more of an evolution of your sound than its predecessor?

Zel: We worked hard on this album and are all very pleased with how cohesive it turned out both musically & lyrically.

With Possession we were throwing ideas around in a freer fashion – writing songs and just going with whatever we first were struck by rather than pushing ourselves to streamline our sound and evolve the songs. With Ascend we had a clear vision of our sound, and we put extra pressure on ourselves to make sure album two would be not only be creatively expressive, but also make sure the songs were more developed & our influences more nuanced. We were much more brutal with song structuring & eliminating anything that wasn’t fitting with the vibe we were striving to create. We obviously couldn’t have written this album without having done Possession first, but it’s a great feeling now it’s done to be getting positive reviews, & for other people to be noticing the evolution from one album to the next.

(((o))): The guitars are more pronounced, and seemingly much heavier on this album. Was that a conscious decision during the recording process?

Zel: When Linz joined the band after Ollie stepped down he worked hard on putting his stamp on the Vodun sound and this is reflected in Ascend.

(((o))): What inspired the use of saxophone and other instrumentation, as well as using tenor/baritone vocals this time round?

Linz: Chan has played in bigger sized bands like Chrome Hoof and Do Me Bad Things and is used to having multiple layers of instruments around her and was keen to expand our sound.

There was percussion on Possession that we played ourselves, but wanting to step up the Afrobeat and rhythmical vibes we decided to get in Anselmo, who Chan had performed live with on ‘Jools Holland’ with Ibibio Sound Machine, to play down extra rhythms and layers.

Ollie (sax) also featured on our album launch of Possession and we wanted to get him to play on some tracks to give a more ‘worldly’ sound.

Zel: The extra vocals came from pushing ourselves to add as many layers of expression to the mix as possible, both on the recording and live.

(((o))): Why did you choose to bring in Chris Georgidias of Turbowolf in on ‘New Doom’?

Chan: I had worked with Turbowolf on their last 2 albums as well as occasionally joining them on stage if we happen to be at the same festival or town. While on tour supporting Turbowolf last year, we came up with the idea of asking Chris to sing on New Doom as we felt it would be a great fit.

(((o))): There’s a very strong feminist angle to the lyrics on ‘Starting From’ and throughout the album as a whole, tied in with the idea of learning from one’s own history. Was this a conscious decision during the lyric-writing process, or was it just that that was where your inspiration took you?

Zel: It was conscious, based on our experiences and what our communities and the wider world have been talking about within the last few years. I think the #metoo movement gaining momentum and people starting to call these issues out, juxtaposed with the rise of the right and men getting power despite their horrendous viewpoints on women, has been a real eye opener. It’s weird to feel that whilst we are taking steps to go forward with problems that affect minorities and them taking space to talk, the traditionally minded folk who fear change and want to keep the ball in their court are rallying and pushing hard to silence and even mock them. The necessity of the BLM matter movement, along with hate crimes on the rise against Muslims and the LGBT community, the whole Brexit debacle, animal rights issues – they have all been weighing on our minds.

Zel: I think that spiritual practice and the older forms of animist religions offer a more holistic and inclusive approach anyway – women are respected as the creators of life, and female characteristics are celebrated.

(((o))): How did the spirits venerated by the band members – Oya, Ogoun, and The Marassa – come to be? Were they stage-names chosen like any other pseudonym, or was there more of a spiritual process to it?

Linz: We like to consider our live show to be an out of body experience and have always considered them to similar to Vodun rituals. We feel that Oya, Ogoun, and The Marassa are the Vodun spirits that embody us and our personalities when we hit the stage.

(((o))): Do you feel that Western culture could benefit from the teachings of vodun? If so, what lessons in particular do you feel would be most beneficial?

Zel: Yes – respecting the earth is a massive one! Animists believe that all things have a spirit (rivers and lakes and trees) and needed to be treated with respect accordingly.

(((o))): Learning from history, whether via the wisdom of ancestors or otherwise is another prominent theme on the album. What historical lessons would you most like to see put into practice?

Zel: That it is compassion, empathy and love which unite us and make us better as a human race – not fear, hate and division.

(((o))): Lastly, if we could see into your soul, which five bands, albums, or songs would we be able to see?