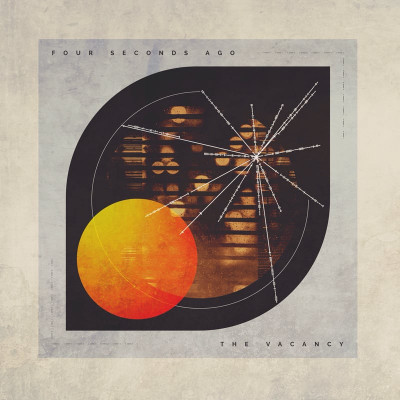 The Vacancy by Four Seconds Ago

Four Seconds Ago is a new collaboration between the guitarists of prog metallers Periphery, Misha Mansoor and Jake Bowen, who have also formed a new label, 3DOT Recordings. It’s a step away from their day jobs, into the realms of ‘downtempo electro-ambient’ music. The press release says they took some time to get to grips with sequencing equipment and synthesizers, and then made this album to explore another aspect of their sonic synergy.

On first impressions they did a good job. The music sounds polished and bright: openers ‘Fadeaway’ and ‘Galaxy’ have a sort of happy trance vibe. It’s neither downtempo nor ambient, but labels aside they did it: they made an electronica album. But unfortunately the interest wanes pretty quickly. The tunes and overall sound remain pretty much the same, and after a while it all comes across as a little twee, and often a bit dull. At times, as on ‘Shadow Devil’ and ‘Over and Out’, it doesn’t sound a million miles away from the inoffensive output of American Dollar.

There are moments of atmospheric moodiness such as at the end of ‘Bloodfrenzy’, that seep across into next track ‘Listening Post Alpha’, which is less up tempo and does show much more of the subtlety and nuance alluded to in the press release. ‘The Great Silence’ has a laconic, trip-hoppy vibe that I really liked, but it’s a shame to say that the highlights are few and far between, interspersed as they are by the likes of the smaltzy 80s-esque electropop of ‘Nothing to Hide’.

Coming as it does from the creative talent who shape the sounds of a ballistic prog behemoth such as Periphery the relative dullness of The Vacancy was a complete surprise. I’ve reviewed a few ‘metal-guys-turn-their-hand-to-electronica’-type efforts recently and on the whole it’s often a surprise and a pleasure seeing how different – and good – these electro outings are, and I love listening to what they do. But Four Seconds Ago have mistaken virtuosity and undoubted technical accomplishment for the ability to create an engaging atmosphere, and to make the headspace that good electronica should provide. The Vacancy, I’m afraid, leaves nothing but a lingering saccharine sweetness.