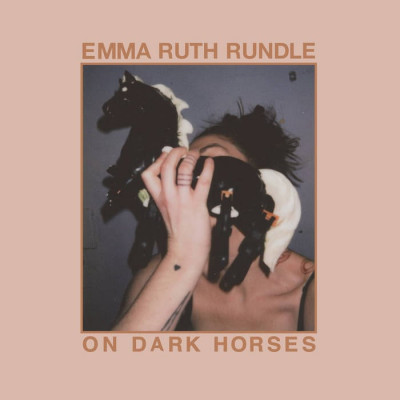 Emma Ruth Rundle is one of the few artists capable of making exquisite and stunning music across a multitude of styles. Whether it be as part of instrumental post rock/metal act Red Sparowes, the dreamy angular melodic rock of Marriages, the folkgaze of The Nocturnes or her sublime solo recordings. On Dark Horses is Emma’s fourth solo album and is undoubtedly the most eagerly anticipated as we were teased about this being the heaviest sounding album yet. For the most part, this is true as the overall sound is fully electric but still retaining an atmosphere of tranquillity. Previous album Marked For Death contained similar sonic swoops between quiet reflection and powerful surging choruses, but the acoustic element was prevalent, while 2014’s Some Heavy Ocean mostly featured haunting ballads.

Throughout the album, there are references to horses, likely influenced by Emma’s relocation to Louisville, Kentucky to be with her partner Evan Patterson, who provided a writing foil by contributing guitars to the album. This caused some consternation for Emma, “This the first time I haven’t played all the guitars on my own record,” but the result enhances the listening experience as Emma is allowed to roam free with her trademark delicate flourishes. Lyrically, On Dark Horses is emotive, personal but also empowering, best summed up by Emma herself. “The record is about overcoming—understanding and embracing the crippling situation and then growing beyond it, Horses keep working their way into the lyrics and visual dimension of this record. They’re powerful and beautiful yet not free really”.

The abrupt start to On Dark Horses takes you by surprise as opener ‘Fever Dreams’ leaps out without any instrumental introduction as Emma immediately intones “Fear, a feeling, is it real? So nostalgic too, it just puts the dark on you” over heaving drums and the darkest sensual atmospherics. Velvet guitars provide a technicolour backdrop with marvellous invention and creativity. When Emma sighs an “Ah-ah-ah-ah” into the chorus it is spine tingling. The oasis of shimmering guitars and wondrous vocal dexterity that pre-empts the most eloquent guitar solo is astonishing. When the combination of voice and guitar effortlessly glide together it is heart breaking, this something Emma Ruth Rundle specialises in and there are few artists who can contend.

Emma is a specialist in understanding the dynamics of conveying raw emotion through music and this is exacerbated with the storm of hefty guitars in ‘Control’. Emma’s powerful but reserved vocals in the chorus are inspirational and the flow of ‘Control’ is reminiscent of early PJ Harvey with the basic instrumentation. Control is the lyrical theme and the instrumentation matches with rises and falls that are crushingly heavy and delicately dexterous. ‘Darkhorse’ is moody and magnificent allowing Emma’s voice to effortlessly slip and slide into the spaces shaped by the careful guitars. Once again, the music conjures up images to match the lyrical content with lines like “In the wake of weak beginnings, we can still stand high”, as tumbling drums and surging guitars do their best impression of thundering horses rolling across the land. Swooning slide guitars tease and caress your spine and the overriding atmosphere of the song becomes bleak but never depressive, a total mind fuck if I’m honest.

The beautiful and exquisite guitar tones of the swooning ‘Races’ showcase how much of a talent on the six string Emma is, fans of Red Sparowes will rejoice as there is a non-overbearing heaviness permeating throughout and the guitars remain alive with electricity. I’m not suggesting a division of the vocals and the instrumentation but On Dark Horses would make for an almighty instrumental album. ‘Dead Set Eyes’ emanates a confident swagger as layered guitars stretch out from the speakers and escalate with enflamed intensity for the rousing chorus. Emma really reaches for the skies with some incredible solo work, like screeching fireballs, between chorus and verse. When Emma sings “what doesn’t kill you will just keep you alive” it is raw, emotive and magnificent. Whilst we’re in this heavy moment the slow and grinding groove of ‘Light Song’ creeps forth like a two headed beast eager to exact revenge. Evan Patterson appears to transform the song into a chilling duet with his gravelly and menacing baritone, the song perversely permeates a soaring heat and effortlessly fills every space with a dense atmosphere of brooding intensity.

The airy guitars that introduce ‘Apathy on the Indiana Border’ are most welcome after the dusky ‘Light Song’. It is practically summery in comparison with delightful tambourine and percussive virtuosity. The mesmerising guitars in the bridge are complemented by Emma’s outstanding melodies joyously informing us that “another day is done”. The most uplifting song comes at the end in the form of the triumphant ‘You Don’t Have To Cry’. It bleeds with melancholy and sadness yet offers optimism with some wondrous “la-la-la”s in the chorus as Emma warmly counsels “you don’t have to cry anymore”. It is the aural equivalent of a loving embrace. The warm tones that ascend near the song’s end leave the album with a euphoria that is deeply satisfying and Emma joins in with the erupting guitars with positivity and power.

The cover of On Dark Horses features a blurry image of Emma holding a large toy horse with broken legs and endeavours to provide the listener with a direct synopsis of the themes of the album. Marked for Death presented a stark and personal view of mortality and self-destruction whereas On Dark Horses ultimately presents a strength and triumph overcoming adversity, both lyrically and in terms of the powerful instrumentation. The album did not directly connect with me on initial listens but as I found myself repeatedly coming back, it eventually utterly consumed me.

Every little nuance and delicacy in the stunning guitar lines became familiar and Emma’s unique idiosyncrasies and inflections in her singing increasingly beguiled. There’s a line in ‘Races’ where Emma defiantly informs us that “it’s my time to shine”, I hope this prophetic statement comes true as On Dark Horses is another heavenly collection of heartfelt songs that embellish an already stellar back catalogue of greatness.