(((O))) Review: Allfather – And All Will Be Desolation 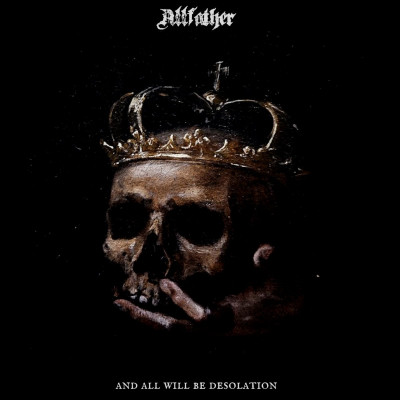 And All Will Be Desolation by Allfather

And All Will Be Desolation is the second album by British metal quintet Allfather and follows on from their very well received debut Bless The Earth With Fire From 2016. After the acclaim which followed the debut, all eyes are on the band to see if they can follow it up with something equally impressive.

Introduced by the somber lone guitar ‘Black Triangle’ is one of three longer songs on the album. This one at the beginning, and the seven minute modern doom masterpiece ‘By Sword, By Famine, By Plague’, which takes elements of Black Sabbath and Cathedral and throw them into their already boisterous mixture of groove and death metal. The albums longest track is the closer ‘Lampedusa’, which leads from an acoustic intro into an old English folk song and adds their savage crunchy metal over the top. A very different, but equally very impressive way to finish the album.

The shorter tracks manage to keep these riffs and massive hooks in whilst ramping up the energy with a fair amount of hardcore and thrash influences. ‘Lord Betrayer’ and ‘Jackal’s Night’ both come in at under four minutes and are almost tasters of what the band can do shrunken down into bite sized blasts of viscous noise. They have tread three or four well followed paths over the course of the record, but managed to mix them into something fresh and relevant.

In this follow up release the band seem to have taken the potential that their first album showed and ran with it. They’ve managed to mix some huge doom laden riffs with thrash and hardcore energy and put together a set of songs that flow well and keep this savage onslaught fresh. Allfather are obviously a band that that are comfortable in their sound and happy to explore different ideas with no pressure of fitting in with any trend, and this really gives the album an added sense of authenticity. Easily one of the better metal albums you will hear this year.