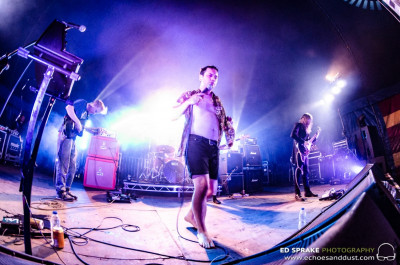 "Gloamer was the last track we did. We put it all together the day before we started recording the album and we were shitting ourselves ‘cause we didn’t have eight minutes and then Johnny turned up with all these riffs he’d been hiding"

(((o))): So, one of the things I was wondering about was how the writing process differed from ‘Feed The Rats’ to ‘King of Cowards’? With Feed The Rats, you had songs like ‘Psychopomp’, which was worked on in various forms over time.

‘Icon’ was the same. Like you say, we worked on it over time. We’d write chunks, like 4-minute chunks that were kind of tracks on their own, and they weren’t really finished, but we’d play the live and then write another four minutes track, but they were all in the same key so they’d all just flow together, ‘cause we’d been playing them for fucking two years or something, we put them to-gether.

(((o))): Is that a similar approach to a band like Gnod, were you do huge jams and come out into a more structured part of a song like a verse?

No, we don’t really jam much, we tend to come to practise with some ideas. Fairly solid progressions and riffs and then stitch it together really.

(((o))): I meant more in the sense of constructing a set, do you play each song in its entirety or do you jam through them so it’s fluid?

Early on we had an idea that never stuck, that every track would go into each other. That we could turn up at a gig and do a set of tracks and do Wizard in the start of Feed The Rats but, it never quite stuck. They all piece together quite nicely and we approached writing it with that in mind. With King of Cowards, there’s shorter tracks and we wanted to make sure they all went together quite nicely and there was no jolt out of the experience for the audience.

(((o))): I wish I had more time to listen to it before the interview, (the press copy), I’d definitely say it’s very fluid and does feel like the same sort of thing. Take a song like Psychopomp that has that prog-style splitting of songs into part one, part two, part three, it still has the same feel but, with the tracks having more variation which is why I guess they’re seperate. I think my favourite track is Gloamer.

I think that’s my favourite as well. Gloamer was the last track we did. We put it all together the day before we started recording the album and we were shitting ourselves ‘cause we didn’t have eight minutes and then Johnny turned up with all these riffs he’d been hiding.

(((o))): That guy’s a fucking machine. Is it a kick in the shins me liking that one the most, after you spending so long working on the rest?

If anything, it’d probably give us a bit of hope in terms of the direction we’re going in.

(((o))): It reminds me of a story a heard of Head Like A Hole by Nine Inch Nails. That basically, Trent Reznor spent years working on the rest of the album and then bashed Head Like A Hole out in like a day or a week or something and it was like the biggest track on the album and he was kicking him-self, like, why don’t I just bash ‘em all out rather than spending five years on every record?

We intentionally, limited ourselves with the amount of time we spent on the album. We want-ed to change it up a bit after unintentionally spending so long on Feed The Rats.

(((o))): Was there anything from King of Cowards being worked on during the time you were working on Feed The Rats or around the time that was coming out?

Thumbsucker. Ewan (Makenzie) wrote that one with us, the old drummer. It was pretty much done a few months after Feed The Rats came out. Since Chris (Morley, drums) has come in, he changed the drums up a bit and made a few tiny little changes but, that’s been sitting around for a while.

(((o))): I like when bands do that. It’s important to keep the writing process and know when to hold stuff back because it needs more work and when to release stuff. I think there’s stuff that might not work on album but, it might work in a set. I remember watching Gnod play ‘Bodies For Money’ short-ly after The Mirror came out and everyone lost their shit. It’s good to be someone whose a big fan of a band still getting blown away when something you don’t know gets brought out.

I think it’s important to know when to play your new stuff and how it gets played live. It also gives us a bit more freedom. For example, when we play Psychopomp that’s fifteen minutes of our set. I think we might look at fitting in parts of the longer tracks rather than playing the whole thing, see how that works out, it something we’ve not done before.

(((o))): Like a medley type thing were you insert sections that fit naturally into a different songs? I always come back to the same songs but I remember Gnod spitting out bits of all different songs at Rocket 20 and being blown away but, I’ve also always appreciated growing up watching Nine Inch Nails throw in refrains from other songs into parts of a fitting song. I think it’s also a good way to fit in parts of songs that members of the audience or the band enjoy when you can’t necessarily fit it into a set. And I guess as someone who’s played some of these songs for years, any experimentation must make things more interesting?

There was a year that we had, were we played three gigs in a row in Newcastle of a period of fourteen months and it was the same set for all three due to how we were working at the time but, I didn’t mind that so much. Having the new stuff ready is really enjoyable and it’s giving us a big boost.

(((o))): How are you approaching the album launch at Moth Club, I’m guessing you’ll probably have a slightly longer set for that?

Yeah. Not really talked about that yet. I imagine we’ll play the full album though.

Yeah, we couldn’t make that unfortunately.

We left it in the hands of the artist to an extent. She’s called Sophie Hollington, it’s kind of pagan, folk art, inspired stuff. Lyrically, the album is all about guilt and sin so, we sent her a brief synopsis of the themes of the album and wanted to get the seven deadly sins in there somehow and that’s what she came back with. We’re really happy with it she’s incredible.

(((o))): When I first heard the album name King of Cowards, I thought it must’ve been said as a kind of self-deprecating joke, like something one of you said whilst chasing the other with a tea towel or something.

Funny enough, it was but, it was a broken wine bottle. I brandished it at Matt (Baty, vocals), he said it was a coward’s weapon and yeah…

That’ll be me. Funny that without the tea towel, you plucked that to a tee.

(((o))): Yeah, I’ve written before about how I think what you guys do has a lot of silliness to it, espe-cially with Matt, but, deep beneath I feel like there’s a lot of serious ideas and powerful stuff going on. A lot of the time, I write stuff and I’m not thinking about it, it’s just my take on something but, it’s always cool when someone tells me, that my weird hypothesis as to what was going on is actually accurate to what someone was intending.

(((o))): Now that the album’s came out and the first single’s came out, is live sessions gonna be the core of your direction for the time being?

We’ve got a new single coming out and the session was actually something that just came about by chance, wasn’t really something we’d ever considered doing before.

It’s something we’ve talked about but, never really did.

(((o))): The thing with covers, you have to make them you’re own and they fit still. I guess it’s about finding something that you enjoy, can make your own and it still sounds good.

I know Matt and John are in other bands, do you play in any other projects?

No, not at the minute. Started something briefly but, I don’t really have time for it. I have cyst-ic fibrosis so, it’s already a bit of an ask at the moment. Maybe something that not gigging, just re-cording at some point. Sam’s really busy at Blank Studios. Matt and Jonny have got a bit of time off now, they were playing live with Richard as well, he’s taking time write now.

(((o))): I like when he played here with you guys, you should do a track together.

He’s on the album, on three tracks; he’s on GNT in the choir bit, he played synth on the end of Gloamer and the end of A66.

(((o))): Cool! I didn’t know that! I really like his style, the whole medieval folk thing, that shit always appeals to me. Not like Iron Maiden but, in the more more underground sense. (See Prometheus and The Satyrs).

I guess at this stage, you must be looking for a new approach after doing the first album one way and the second another, I guess the important thing must be to do something different that re-mains organic?

Guess we’d like to go further down the Gloamer path.

What’s the rest of the year got in store for you after the album launch?

A few gig dates, festivals and a tour before we go quiet for December.

Yeah, do human stuff… I think we might start writing again. We don’t wanna leave the gap we did last time.