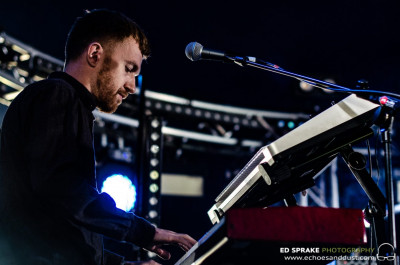 “I wish this festival had existed when I was 16-18. I think in years to come there's gonna be a lot of really cool things and bands to come from people having an event like this at their disposal. It's something that's massively overlooked [...] I think it gives artists a tangible platform to be like - this is how it could be for you. Music like this works here as the conclusive proof of that.”

At this year’s sublime iteration of ArcTanGent festival, I had the privilege of talking to James Spence, keyboardist and founding member of Rolo Tomassi. We discussed the festival, their transcendent new record Time Will Die and Love Will Bury It, and John Carpenter-esque keyboard patches.

To begin, we opened with a chat about ArcTanGent and the band’s ties with it. I asked James how many times they’d played at the math-rock mecca. “We played the first ever year that it happened, and since then we’ve basically played every other year, with some years back to back. So if this is year five, we’ve played three of them. In fact, this is the fourth time we’ve played here.” I pointed out that that meant they had played the same amount of times as the other ArcTanGent ‘house bands’ – Alpha Male Tea Party, Maybeshewill, and And So I Watch You From Afar. The term ‘house bands’ gave him a chuckle as he responded to my asking what keeps them coming back: “Firstly, the lineup is always fantastic. It’s really well run, everyone is treated really well, and – it’s just the easiest gig of the summer […] Why wouldn’t we wanna play? It’s so easy and it’s so nice and there’s always a lot of our friends here, and yeah – it’s just brilliant. The best of its kind in the UK – unrivalled.”

I agreed, and asked him whether considering that ‘ArcTanGent bands’ all share certain distinct genetics, Rolo had played with or seen any bands at ArcTanGent that they identify as influences. “I mean, in terms of stuff that is a major influence, ATG has had Dillinger and Converge, and – like you said, when you talk about genetics in musical DNA they’re two bands that I still definitely pull a lot of influence from. You know what, I’m trying to think of bands that I’ve seen here… ‘Cause the last couple of times we’ve been here, we’ve had to leave on the day that we’ve played cause it’s been part of a tour. Today we have to leave like an hour after we finish. When I think of being here, I think of playing, and I think of the times that we DJed afterwards. I haven’t got a lot of memories of having the luxury of standing around watching bands all day. Really good memories of watching American Football when they headlined though – that was really good. But yeah – probably those three. I like watching headliners at festivals and the headliners here are always absolutely boss.”

I agreed wholeheartedly, pointing out that they’d managed to clinch the only UK Shellac show of 2018 as a headliner this year. If that doesn’t showcase credibility, what does?

When I then asked about what we could expect from their set at this year’s festival, his eyes lit up. “Obviously, we put a record out earlier this year. The set is comprised mainly – no, in fact it’s all tracks from that. It’s a record that we’re really enjoying touring and we’re really proud of, so we just wanna put that out and it’s the perfect place to be – I think there are certain festivals [where you can] do certain shows. There are some you do where if you went out and did just new material people would have a problem with it. I feel we’re comfortable enough to do that here. It’s the festival to do that. We’re closing with a song we wouldn’t usually close with, but again – cause we’re at ArcTanGent – we know we can get away with it. It’s really nice coming here and feeling that comfortable immediately, and knowing that you can do things that you wouldn’t be able to do at other shows. It’s part of the charm of this festival.”

We discussed this phenomenon of bands doing specialised sets at ArcTanGent, which is far more common than at other festivals. I pointed to Maybeshewill’s fan-voted headline set on the very first Thursday as a great example, to which he replied that John from Maybeshewill had been driving them this weekend, and they’d discussed that very set on their way to the festival. I went on to rhapsodise about how enlightening having ArcTanGent at my disposal was when I was 18, to which he said: “I wish this festival had existed when I was 16-18. I think in years to come there’s gonna be a lot of really cool things and bands to come from people having an event like this at their disposal. It’s something that’s massively overlooked […] I think it gives artists a tangible platform to be like – this is how it could be for you. Music like this works here as the conclusive proof of that.”

I won’t claim that he was referring to my band. While the topic of their new material was still on my mind, I asked them about Time Will Die, and how in an interview with Already Heard [insert link] he discussed how they’d transitioned from the whole-album-as-cohesive-piece approach they had on their last album Grievances into trying to condense complete and individual ideas into single tracks. “I think what was really important with this record was that different members within the band were able to lead within certain sounds we were going for. So on the really extreme heavy stuff, Chris was able to take his contributions towards writing fully in that direction. He’s really good at writing music that sounds like that. It’s just something that he kinda excels at, whereas with the the poppier stuff – I think  Aftermath came out in the way that it did because Nathan wrote most of it.” We went on to discuss how Nathan being the one to write the main keyboard part for Aftermath resulted in a track that was a break from convention for them. “Nathan wrote the verses to [Aftermath] and he wrote the keyboard parts to it, he did stuff that I wouldn’t usually do which kind of lent itself quite well to developing a slightly different side to the band, and then around what he’d written I had this chorus idea that I just transposed […] I think with this record more than any that we’ve done, people played to their own strengths.”

James opened up about how in the past, he had struggled with stepping back from a composition and letting the other musicians around him take their own path unguided, but in the process of writing Time Will Die he took that step back and immediately saw the benefit. “I know in the past [I wanted to] have a hand in everything. And I think I’ve learnt as I’ve got older that you just need to take a step back and […] be involved but not feel the need to have a hand in everyone’s brains, just let people excel and follow their lead sometimes. It led to really good results. We’ve found a really good balance of writing and contribution and I think it made everyone feel a lot more comfortable. Just little things like – in the past, I would write some guitar ideas. I can’t play guitar anywhere near as well as Chris can. And for me it’s [just that] you know, I’m the keyboard player in this band. When we tour this, I’m gonna have to play the keyboard parts. So I’m gonna make the keyboard parts as amazing as I can, and I’m gonna put so much time into that because it’s one thing writing this really cool guitar riff, but if I don’t get to play that live – what’s the point?”

It was clear to me how much James had fallen in love with devoting himself to the singular pursuit of writing the best key parts that he could. This belief was only reinforced as the conversation moved on to the distinct maturation in style he’s displayed on the band’s latest. He has progressed from his wildly spiralling Nintendo-prog style on the band’s earlier records to a much more textural, evocative approach. I asked him in particular about the stunning centrepiece of Time Will Die, ‘A Flood of Light’, and its Blade Runner-esque keys break that remains as breathtaking on the 10th listen as on the first. “Someone actually thought it was a saxophone, which made me laugh a lot – it doesn’t sound like a saxophone at all! But it is pulling cues from people like John Carpenter and sounds on the Blade Runner soundtrack by Vangelis, that kind of big sci-fi spacey thing. That’s exactly what is going on with it. One thing that I really made an effort with [on this record was] I wrote as many of the patches myself as I could, ‘cause I wanted everything to have its own individual sound.  I got quite into that – it’s just fun. I use a Nord Electro 4 primarily for piano, organ, and electric piano. The really cool thing with that is that Nord constantly update sounds that you can download for free on their site, and I just sat there listening to loads of 5 second demos of sounds, and I found that one on the soundbank. I made a few tweaks to it on the keyboard itself, and I thought – this is fucking perfect.” And perfect it is. When the band closed their set with it, those synths burst into the crowd like the dawn.

Sadly, we were running against time with the interview and James was called away to get ready for their set before I could ask him what kind of biscuit Rolo Tomassi would be, a regret that will live with me for the rest of my days. Regardless, it was a lovely and illuminating chat with a passionate musician from a band that continues going from strength to strength, and I am grateful to have had the opportunity to pick his brains. Since I discovered Rolo at the first ArcTanGent in 2013 along with a vast treasure trove of other bands that have shaped my tastes, it was a neat bit of circularity.