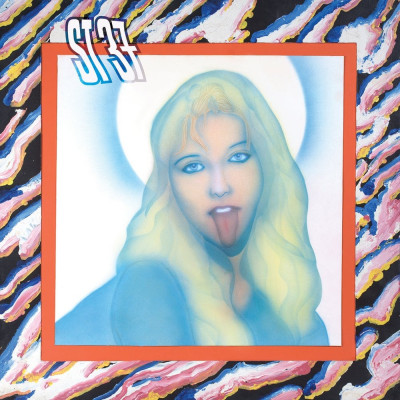 In what is now their 18th album (depending on how you count them), ST 37 still maintain true to that singular vision of worshipping at the church of Hawk and Wind. There’s no point in fixing anything that’s broken though, and here, whilst they may have self-titled their album, there is no sign of a new beginning. Instead it’s business as usual.

That business, will once again be full on riffs, leading into spaced out moments, as the music gets progressively deeper. ST 37 take no prisoners with their sound, and for most of the time remain resolutely “in your face”. The punkier aspect of their upbringing roars out at you, held in check only be the mind-melting moments of tripped out glee that fling you from rage to fucked in the space of a minute. ST 37 take no prisoners, and for all its uninviting pedigree, it mostly works.

On this album you get what amounts to the best and worst of ST 37, as they take in sublime tripped out moments against unnecessary juvenile nonsense. The less said about ‘Boss’, the better, but apart from this jarring moment which serves as the low point of the album, you get the absolutely divine pay-off of ‘KBDP’, or any of the closing tracks on this album. Indeed, the second half serves as a timely reminder of the potent mix of riffs, dub and samples as they drift ever further into outer space.

Less about the songs, about the album is more about moments such as the BBC sound effects of ‘Grey Area’, which offers some analogue displacement after being left in the ambient space of ‘Shaper Of Worlds pt.2’. Of course, there is only a short step before you get bludgeoned by the admittedly good ‘Hollywood Cemetery’. There’s no need to stay alert as ST 37 will do that for you.

On the whole, ST 37 is a good listen and ticks the requisite boxes for providing a tripped out experience. Certain moments do let the album down though, and for all its various nuances, it remains an album of blustering noise. If you are happy to let the loudness take you then go right ahead, but if you want something more subtle then you’re in for a wait. This far down the line, quality control may not be the number one priority for the band, and if they are content to just play around with the listener, then they have succeeded. After a couple of listens you will most likely find yourself not wanting to return. In parts it is excellent, but ultimately it pays few dividends.