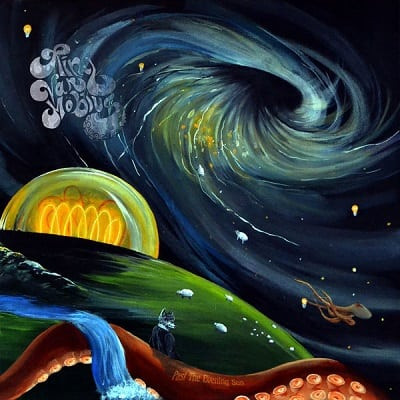 Past the Evening Sun by Ring Van Möbius

When I first watched the video of their title-track from their debut album released this year on Apollon Records from an up-and-coming band that formed in Karmøy, Norway, I had no idea what to expect from Ring Van Möbius. And for me, I didn’t have a clue on what I was going to expect, what kind of an adventure I was about to embark on,

The trio considers Thor Erik Helgesen on lead vocals and keyboards, Håvard Rasmussen on bass guitar and effects, and Dag Olav Husås on drums and percussion. Listening to their debut album, Past the Evening Sun, is like a mind-blowing experience for me. And for me, when I was listening to the opening title track of the six part suite that clocks in at 21 minutes and 39 seconds, you can close your eyes and imagine that is 1971 all over again.

Adding the mellotron, organ, moog, harpsichord to name a few, Thor brings in the theatricality textures in his vocals and keyboards setting up these darker and hidden voyages that you would never expect. It is part Peter Hammill and part Alice Cooper (Billion Dollar Babies and Welcome to my Nightmare-era). And Thor himself can hit those notes very well when he sings.

It is like a story that is brought to life. There are elements to the Pawn Hearts-era of Van Der Graaf Generator during the climax of ‘A Plague of Lighthouse Keepers’ thrown into the mix of the blaring saxes of Karl Christian Grønhaug as he tips his hat to David Jackson and giving his blessing to keep the spirit and sound of Van Der Graaf’s music alive.

Then you have Håvard doing some mind-blowing wah-wah and fuzztone sounds on his Fender VI bass. Ring Van Möbius are bringing their own textures and techniques as if someone had opened up the flood gates and creating these massive tidal waves into their sound and vision of the music. With ‘End of Greatness’ you have these lushful mellotron sounds that fill up the entire room before Thor’s vocals, Håvard’s bass, and Dag’s drumming becomes this mournful composition. Dag sets up these scenarios on his drums as the music is letting the listener know of what was, is now a pile of both rubble and ashes.

The closing track ‘Racing the Horizon’ starts off with this dooming avant-garde introduction. When I first heard it, I felt a little tug to Banco Del Mutuo Soccorso’s Darwin! And then the doors come knocking down as Ring Van Möbius go into the aspects of the late great Bo Hansson. The band take some of the elements of the Italian progressive rock sound and mixed in with the Hammill-sque vocals to go along for the ride. There is this alarming midsection they do as the temperature level goes up thanks to Karl’s sax and some clacking and clicking noises that almost gave me some goosebumps more and more.

Ring Van Möbius’ Past the Evening Sun is definitely worth checking out. The trio have completely taken me by surprise. And they have surprised me more and more when I listened to their debut album about six times now. This isn’t just a progressive rock band, but one of the most amazing up-and-coming bands to come out of Norway you need to check out. And I highly recommend it!