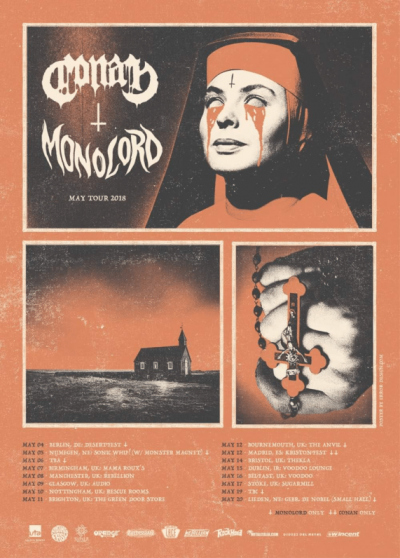 Conan on the web:
Facebook | Bandcamp |
Support: Monolord
May 8, 2018 at Rebellion, Manchester

Rebellion in Manchester is a venue that has now become familiar to me: maybe not the perfect shape for a gig venue but one that recently has attracted some great bands; it has a nice atmosphere and a half-decent bar. Before the gig, the venue fills slowly with the usual array or patches, beards and tattoos. The atmosphere is nice and relaxed, and tinged with a little excitement; those who have seen these bands before know they are about to be treated to some high-quality noise.

Monolord, who must be the nicest guys in metal, stop for a chat prior to going on the stage. I don’t know why but the I always assume well-known musicians to be somewhat aloof – maybe holed up in a green room or a tour bus drinking Jack Daniels from the bottle, shouting impossible demands at flunkies before reluctantly taking to the stage. Monolord, on the other hand, appear chilled and happy – happy to be given the opportunity to play their music for an appreciative audience. Prior to the normal European festival circuit they took in a few UK and European smaller-venue gigs. The stage, bathed in red light, with the two sizeable Orange cabs placed at opposite ends of the platform, and Mika’s bass stack draped with the familiar figure from the Vænir album.

The band opened with ‘Where the Death Meets the Sea’, from the new album Rust. The sound from the stage can be felt as well as heard. I’m fairly sure the bass was loud enough to make my beard move! Drummer, Esben Willems, is as powerful and always hits hard. The band are in their zone right off the bat. They go straight into ‘Lord of Suffering’, the vocals are ethereal and almost distant sounding but cut well through the wall of detuned fuzz. Mika Hakki is animated, giving his bass a workout. ‘Cursing the One’ follows in a similar vein, the track in places drops away to only bass before exploding back in to the full band. This is a wall of noise, delivered with surgical precision.

With no letup, the bass on ‘Audhumbla’ slaps us all across the face, Mika often playing with his fist whereas Thomas (Jager, guitar/vox) is often just a blur of hair, arms and axe. The band tends to draw you in – well once you’ve recovered from the initial aural assault that is, The track meanders and, slightly unusually for Monolord, has some guitar solos.

Next up, with a slight change in pace, the melodic organ opening of the title track from the band’s most recent release, Rust. The lyrics “You are the reason why I lie” echo from the stage. Of course, the melodic intro soon erupts into noise. The band are energetic, comfortable and well in their zone at this point.

Ending their set, is the absolutely epic ‘Empress Rising’. This has to be one of the very best live songs I have ever experienced. Full stop. It’s been in the Monolord back-catalogue for a while, and it has morphed into a 15-minute opus. I can’t really put into words the effect this track has, just to say that watching a YouTube video gives you about one tenth of the experience you get live.

With just about enough time to recover and grab a pint, Conan make a subtle appearance onto a stage bathed in smoke and light. Vocalist Jon, cuts an unusual silhouette with a mop of curly hair. Now, I must apologise to the band as I didn’t grab a set list, and the usually reliable setlist.fm let me down. Anyway, the opening track has thunderous guitar that according to a YouTube video (I’m an unashamed guitar nerd) is tuned to F#, which even for doom is low! This creates a blanket of heavy, hypnotic drone. The drummer hits hard and pierces through the thick guitar and bass. The band build their set, starting slow and gathering pace, reaching the bands newer work, which is noticeably sharper and edgier. The set is probably better treated as a whole, and is well crafted. I have to admit I was a bit nonplussed for the first few tracks, but as time went on, and the band got into their groove, they improved immensely. Jon’s vocals, at the point of shrill sometimes, sit back in the track and sometimes project forward. In a similar way to Monolord, they drew the fans. Although gigs like this tend to be a mosh/crowdsurfing-free zone, many people were almost hypnotised, immersed in the experience.

As the band played ‘Hawk as a Weapon’, the crowd really responded; a full and energetic pit appeared, and Jon’s vocals seem to float above the noise. As the set came to a close in a maelstrom of chaos, the band had really created an experience that these few paragraphs really don’t do justice to.

Both bands played excellent set: facemeltingly heavy, the sort of gig that takes a bit of time to recover from. It’s a real pleasure to watch two bands enjoying themselves and doing what they really love. Highly recommend to be experienced in person.