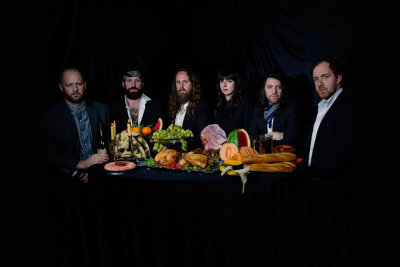 New York City is everything for us. If we lived in a rural part of the country, we wouldn't sound like we do. When we were finishing writing the record we went upstate to the house of a girlfriend’s family, and we set up the drums and amps and shit outside and started playing our songs. Within 20 minutes we had morphed into the Grateful Dead, so yeah, we got the fuck back to New York quickly.

It is with absolute pleasure to hear a new band convincingly rock hard in the spirit of Bon Scott era AC/DC, spit and snarl sleaze of the New York Dolls, and Thin Lizzy harmonious leads, all consumed and spat out on a most impressive debut album released by the good people of RidingEasy Records, in the year of 2018. An accomplishment achieved by the New York based sextet Mick’s Jaguar. Fame and Fortune is the album in question, familiar in sound, but cool and classy, packed full of instant high quality, catchy rock ‘n’ roll tunage, which leaps out full of refreshed vigour. So, Echoes and Dust needed to find out how did this all happen; John Martin reveals how ‘blackout’ drunkenness, Rolling Stones covers in ragged noise heroes Pussy Galore style, and the band’s ‘seventh member’ all contributed to Mick Jaguar’s current shape and sound.

E&D: Can you tell us a bit about the band’s history so far? How did you all meet and form the band etc?

John: John, Sam, and Mike have known each other for a while, and with a couple other dudes started out getting blackout drunk doing Stones covers in a Pussy Galore sort of fashion. The other dudes moved to LA but Don was bartending at one of the bars we frequented and Grace came to the last show of the first covers lineup and picked up an acoustic guitar at the after party, and played the Mick Taylor solo from ‘Can’t You Hear Me Knocking’, and she was in. Alex came on a bit later, we had been playing shows with his other bands who were winding down but he still wanted to rock.

E&D: Have any of you been in any previous bands?

John: Alex was in a super fun party rock band called Workout. Don Chino played in a bunch of Chicago punk bands like Horace Pinker before moving to New York and then he was in The Dardys (who own our favorite after party bar Dardy Bar), and Grace was in School of Rock in Philly when she was a kid! Mike was in some Brooklyn bands. Sam’s first band. John’s first band.

E&D: What are the key musical influences on the band?

John: AC/DC looms very, very large for all six of us, but everyone kind of has their own influences. Alex is the world’s biggest Maiden fan. Grace is an Electric Wizard devotee and goes to Death Fest every year. Don Chino is pure Thin Lizzy and punk rock. Mike grew up in the woods of New Hampshire and worshiped Metallica from a young age. If you get Sam drunk enough he will tell you his favorite band is Steely Dan. John went through an unhealthy Jane’s Addiction phase but if a gun was put to his head he would probably say the Stones.

E&D: How much of an impact does New York – a city which has a legendary musical heritage – have in your sound?

John: New York City is everything for us. If we lived in a rural part of the country, we wouldn’t sound like we do. When we were finishing writing the record we went upstate to the house of a girlfriend’s family, and we set up the drums and amps and shit outside and started playing our songs. Within 20 minutes we had morphed into the Grateful Dead, so yeah, we got the fuck back to New York quickly. It’s hard to escape the Ramones in NYC but we get compared to the New York Dolls a lot but other than like 2 songs that you hear in bars, we’ve never really listened to them. And I’m not saying that in a trolling bullshit “I’ve never heard Led Zeppelin” way like that fucking band (what’s their name?) does. I love Personality Crisis and Trash but could not for the life of me name another Dolls song. NYC isn’t very rock and roll anymore, it’s got some rad punk and metal, but not a ton of rock outside of weirdo East Village mascara relics, so in a way not a huge influence, but we all live here and worship at the altar of rock n roll and have seen the most amazing shows here, so in a way, a lot.

E&D: From the album’s opening song, ‘The Real Boss’, the line “What a horrible, smelly town”, is it case of an all hate relationship with your home city? Any love for New York

John: There’s a saying about not being a true New Yorker until you’ve lived here ten years, but I think it’s; you’re not a true New Yorker unless you both love and hate this fucking place. It’s completely unbearable at times, smells like piss (partially our fault – piss bucket), is crazy expensive, and is overwhelming. But it’s also fucking magic. Fact: none of us were born in or grew up in NYC, despite what our lyrics may say. Despite all that, NYC is definitely the 7th member of the band.

E&D: How does the song writing process take shape in the band?

John: Absolutely no one writes on their own and then brings in a finished song. Maybe riffs or a vocal idea or a beat but that’s it. There’s no songwriter in the band like most bands have. We all just get together, crack beers, drain whiskey down our throats, and start playing. John starts ranting inappropriately about things that are not fit for print and suddenly a verse or chorus emerges and we paste it all together. We record the practices and then kind of mentally cut and paste what’s good all together.

E&D: Was the recording of your very fine debut album Fame and Fortune completed in a short space of time, or spread out over a longer period?

John: We recorded 4 songs in April of 2017 because we thought we were only going to do an EP or something, then once we got signed we went back and recorded the other 6 in August of 2017. We’ve got the second record ready to go and we are demoing in October that we didn’t really do the first time around.

E&D: Philip Weinrobe was the engineer, can you tell us more about the production side regarding the making of the album?

John: For sure. Here’s what Phil says: “1 part chocolate milkshakes spiked with Allen’s Coffee Brandy, 2 parts Underburg (amazing German liquor), 3 parts big guitars, 4 parts very expensive microphones. No but seriously: we used actual equipment from the late 1970s, including an old Neve Console, vintage tube microphones and preamps and compressors. The goal was to really make an album that you could listen to in a playlist alongside AC/DC and Thin Lizzy and the bad tracks off of Zeps later records. We also mixed the record to an old ATR-102 1/2″ tape machine to give it that final flavor and, also because it looked really cool.”

Here’s what the band says: “Phil is obviously a fucking idiot. There are no bad tracks on Zeps later records. But for real, Figure 8 is an amazing studio and Phil is a wizard who got us right away. We all grew up listening to classic rock radio and just love that music, but were born too late for the heyday so obviously have other influences like punk, metal, etc. So, we naturally wrote the kind of songs we like, but wanted them sonically to fit in with our heroes who have all been seared into our brains since childhood.”

E&D: How did RidingEasy Records get to hear about you?

John: We’ve known Daniel for years and he was always kind of amused by our drunken destruction of Stones songs, and would always joke about putting out a single on Record Store Day or something. We asked him if he wanted to hear some originals, he said “Send em”. We then wrote 4 of them, recorded them and sent them. He said “Ummm, these are WAY better than I thought they’d be. How many more do you have?” We said “Another 6” and he says “I’m sending you a contract”. Because we are liars, we then went back and said “Holy fuck, did we just get signed? We have to write 6 more songs.” So, we did. We’re not sure Daniel knows this. Ha ha.

E&D: Your further proof that rock ‘n’ roll isn’t dead (take note Gene Simmons), if you ever achieve “Fame and Fortune” how do you think it would affect Mick’s Jaguar?

John: We would implode. It would actually be incredibly detrimental. Other than our financial well-being so we would have the money to not be living on the fringes in NYC, it would rat-fuck our band. We’d all move out of NYC and never see each other and never write songs anymore. So basically, if you like our music, don’t buy it or come to a show. Success will fuck us. Or maybe it would turn us into the rock n roll touring leviathan that we all kind of wish it could be, and we’d just live on the road. If it truly happened, we’d all just indulge ourselves and become more absurd caricatures of our current selves (which is pretty-absurd already).

E&D: What are your plans regarding getting out to support the album in the US? Any chance of getting over to Europe?

John: We’re doing an East Coast USA tour this fall and then doing West Coast in 2019. We would fucking kill to come to Europe and drink all your beers and wines and liquors. Maybe it will happen in 2019. Booking shows is a nightmare and utmost respect to booking agents who do it well. If there’s any European booking agents reading – slide into our DM’s!

Fame and Fortune by Mick’s Jaguar is out now on RidingEasy Records.