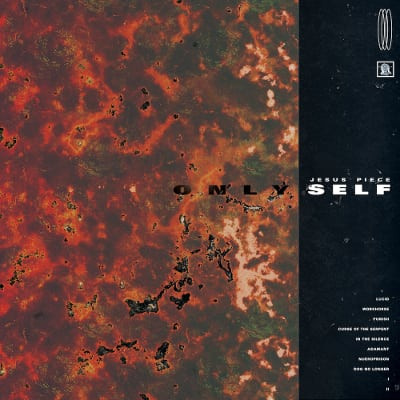 Only Self by Jesus Piece

Hardcore is a notoriously difficult genre to get right. How do you bludgeon a genre fandom who are not only expectant of extremity but positively numb to it? Over the last decade then hardcore has sought to smash and grab from disparate genres and emotions to create a modern beast that is noisier, more direct, and with even more groove. It’s right on the cusp of this hardcore frontier that we find Jesus Piece, the Philadelphia act with their first instance of premeditated murder Only Self.

Jesus Piece out the gate have pulled elements that would be exciting in of themselves and jammed them together into a ferocious genuinely thrilling debut. As a statement of intent they have positioned themselves on the smarter more contemplative side of hardcore, with more then a little DNA of Neurosis with the same earthy touches and subterranean percussion. There are artillery barges of blast beats and groove, before relenting with doom laden passages that allow you to momentarily breath and take in the damage before the next aural assault. Its the breathing ebb and flow that works as the backbone of the album, where Jesus Piece show enough confidence to relent and leave you bleeding.

Lyrically Jesus Piece is a band that fights on all the best fronts and is more concerned with tackling modern issues rather then useless scene posturing. There are obvious nods to the gelatinous spectre of Trump and more grassroots issues such as worker’s servitude in ‘Workhorse’. It brings to mind the brilliant directness of Svalbard’s Serena Cherry in lyricism, although the clarity of vocals will require a few listens and more then a few glances at a lyrics sheet to take it all in.

Hardcore often falls foul of the longer LP format, with the purist form of the genre working better in short sonic blasts. Jesus Piece have enough behind the guttural sounds to keep everything three dimensional and evolving. Flourishes of noise and atmospherics in songs such as the Mayan ghosts opening of ‘In the Silence’ and the descending cataclysm of the terrifyingly absorbing closing tracks – helpfully named ‘I’ and ‘II’. These scorched earth soundscapes are helped immeasurably by the veteran mastering of Brad Boatright of Full of Hell and Nails fame. It sounds horrible with a grandiose cave filling sound akin to a plague of bats all trying to echo locate the same corpse, and it’s bloody marvellous.

Jesus Piece then add themselves to the list of debut albums this year that have no right being as good as they are. In terms of hardcore, you can place this album comfortably next to Vein’s Errorzone and Code Orange’s Forever as ambassadors for a scene that is still ever changing but retaining its one singular purpose: to fuck you up.