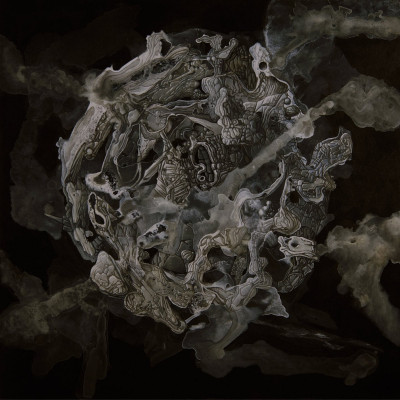 By the Grace of Blood and Guts by HAAN

HAAN’s By the Grace of Blood and Guts, is as straight-up a heavy metal album as I’ve heard in a while. That makes it a bit of a rarity these days. While some of the best records of the last five years are essentially heavy metal albums (think Pallbearer, Mastodon etc), I notice that there aren’t as many bands focused on writing great rock songs. I think people have come to associate tight song structures with stadium bands and frat boy bros. Fortunately, HAAN is here to help reclaim all that with their vicious second album.

The band, based in New York City, is yet another excellent offering from Aqualamb Records (we reviewed Husbandry and The Space Merchants recently) – and that New York vibe is very much a part of the band’s sound/feel. It’s brutal, harsh, uncaring, but also very smart and somewhat irreverent. The best analog I can think of is David Pajo’s band Dead Child. But HAAN brings more power and hardcore punk influence of bands like Unsane or Helmet, and even grunge bands like Soundgarden at times. Actually…there is a lot of Soundgarden inspiration here, but somehow HAAN does it without sounding like frat boy bro music. In their words, “the Venn diagram for the band falls somewhere in between big monolithic rock dude riffs and some weirder ambient noise to confuse those rock dudes.”

The album wastes no time setting the tone with one of the heaviest songs on the album right up front. ‘Thy Tongues’ hits you like a sledge hammer and punches you harder every time you try to get up. Here the listener is introduced to the tight integration of the band’s rhythm section with vocals and melody. The band writes concise muscular songs that would be perfectly at home on a heavy rock radio station at your favorite dive bar. The vocals are sung, not screamed, and there aren’t really any indulgent solos, even though I wouldn’t say the band adheres to traditional verse/chorus song structures. Every song is a bit of an unpredictable journey. This is one of the features I like most about the band. While the band sounds united in musical focus and seems to lack clemency for excessive ego of individual band members, the music is full of surprises.

My favorite track is probably ‘Diminuendo’, which is a blistering hardcore metal inspired noise fest. It’s fast paced, brutal, and a lot of fun.

Interestingly, the album originally started life as an EP. Chris Enriquez, now the drummer for Spotlights, had helped write a lot of the music before leaving to become the touring drummer for Spotlights (who we also reviewed here…because we love you). HAAN wanted to release a record of their period with him, since he’d been a founding member of the band. However, the remaining band members continued to write, and ambitions grew. Two years later, here we are with an excellent full-length album – and better for it.