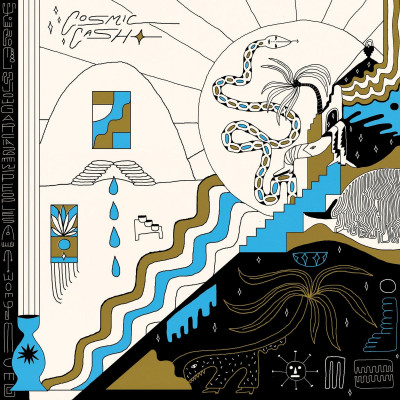 Garcia Peoples may not bother to hide their influences, preferring instead to not just parade that sweet trippy sound within their music, but to also name their band after their most obvious touchstone. It’s rather fitting then, that their album arrives within a week of the anniversary of the great man. It’s a timely reminder of the impact that Jerry Garcia not only had, but still has to this day. Whilst Chris Robinson and his marvellous Brotherhood may take all the kudos for becoming a modern day Dead, it’s more exciting to see that there are also other bands, such as Garcia Peoples, ready to take up that mantle too.

On first listen these songs sound entirely like something you have heard before, but deep down that is the point. The key here is not originality, but passion, and that is what shines through on this rather splendid album, Cosmic Cash. Take ‘Hangin’ On’, a breezy tune if you have ever heard one, and made for FM radio (if that even exists these days). It may sound like a million other songs all put through a Grateful Dead blender, but its sheer passion pulls you into its world. There is derivative, there is homage, then there is love. Great Van Fleet aim for the same feeling too, with their Led Zeppelin passion.

The sweet sound of Jerry floats through in the almost slow funk of ‘Show Your Troubles Out’ which builds from a chilled out kind of beginning to an explosive jam. A band reputed to be in tune with the jam when they play live, you sense that exploration here and there is slight disappointment when the song ends as you find yourself wanting it to continue.

No matter though, as the doleful opening of ‘Four Walls’ acts as a communal stopgap after a heady beginning. A harmonic wonder, it wraps its cosy arms around you, and stops your breath each time, as it reaches its slight crescendo on the chorus. A gloriously beautiful song, if we are to carry on with the inevitable Dead comparisons, this would be their ‘Sugaree’.

This laid back vibe may not prepare you for the onslaught that is the opening of ‘Suite: Cashing Out/Sigh Of Relief/The Midnight Dancer/All The Time/Distant Lands’, and now you get a chance to hear the band in their full on jam glory. All rattling keys, searching rhythms, and playful guitars, the piece moves along like a careening train, ready to derail at any given moment.

It’s the jam glue that holds it together though, and what may seem rather ramshackle becomes a glorious call to arms as Garcia Peoples transcend their influences to become a rather special band indeed. That they are able to pull this kind of moment off on just their debut album points to an exciting future indeed. These guys seem to have tapped into something quite elemental indeed, and want to invite you along for the trip.

It would be easy for the alum to slip into non-existence after this elongated suite but there is further surprise with ‘The Sweet Lie’, an introspective offering which pulls at the heart strings. An unassuming number, its simplicity of nature serves to pull us back into the groove after being sent on the jam. Finishing number ‘I Ain’t Hurt’ acts as a “come together” moment which ends the album on a moment of delicious hope.

To emulate the sounds of a classic era may be a risk for many, but for Garcia Peoples they manage to strike gold. If you have been yearning for a return to the West Coast psych sound then this is the album for you. It’s the sound of summer, a fat one rolled, and a beer at your side. This is the sound of pure psych, delivered through the jam, rather than trying to fry your minds. This is Garcia Peoples, fall in love with them now.