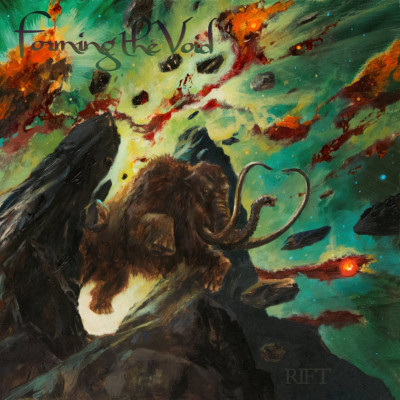 Rift by Forming The Void

You like riffs? You like soaring melody? You like a bit of space-talk with your riffs and melody? You like albums with a mammoth flying out of a volcano on the cover? Then you’ve come to the right place: step right up and witness Rift.

This is the fourth release – and third in just over a year – by Forming the Void and if you heard their previous one, Relic, you will know what to expect. Which is no bad thing, luckily: Relic was a great album, polishing up the stoner-doom template into a catchy, enjoyable – and accessible – bunch of songs about mythical beasts and magic. Whatever they grow down there in Louisiana, it certainly makes for fantastical music.

This one, on the first couple of listens, appears to tread over the same ground, especially with the neolithic stomp of the first two songs, ‘Extinction Event’ and On We Sail’.

But then the band slow things down a tad, with ‘Arcane Mystic’ and ‘Transient’, giving the lead guitarist Shadi Omar Al-Khansa room to play and the vocalist (who also plays guitar) James Marshall ample opportunity to display his mighty bellow. On ‘Transient’ in particular, it sounds as if he is singing his words “Steeped in glorious light, colossal figure of space and time…'” with his arms spread wide, standing on the top of a windswept mountain.

And Al Khansa’s lyrical solos add extra texture and depth without suffering from the unforgivable crime of being instantly recognisable as solos.

The album strikes a perfect balance between heavy and crowd-pleasingly melodic; you could play it – particularly the second half of the record – to a gnarled and bearded curmudgeon who only listens to Sabbath (and Electric Wizard on his birthday) and he would be impressed. Conversely, you could imagine a teenager who considers Royal Blood to be the epitome of riff-masters (I do worry about the young sometimes) would also dig Forming The Void.

Things go really out-there in the final two tracks, which are also the longest. First ‘Ark Debris’ looms into view with a long, brooding intro and what sounds like a pungi – the instrument best-known as ‘the snake charmer’s flute’ – adding an air of mystery and exoticism. It is a classic of the ‘staring-at-a-big-starlit-sky-while-lying-in-a-desert’ genre of music, especially when the guitars properly kick in.

‘Shrine’ continues the journey into the cosmos with a 10-minute behemoth of a song, which boasts a genuine ear-worm of a chorus and a woozy middle section that demands a big beanbag. You know what I am talking about. The opening riff returns after the woozy section, but faster, before the band appear to try and out-heavy each other. You can picture the bassist Luke Baker and drummer Thomas Colley grinning at each other while they pummel their respective instruments in an attempt to get an even bigger noise out of them.

And it is a great way to finish the album, which at seven songs long leaves us wanting more. Here’s hoping.