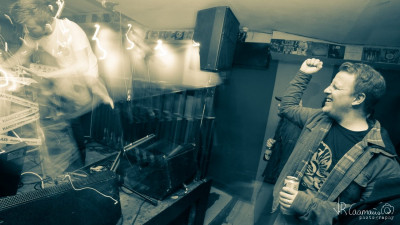 "We put on Frauds, John and Twisted Ankle after Wales v Scotland in the rugby and there were dudes moshing in kilts. It was beautiful."

Anyone who’s met Rich Collins of Cosmic Carnage knows that whenever he enters a new dingy, sweaty rock bar it’s not long before he’s gotten to know everyone in the room. So when he returned to Wales after a long stint living and putting on gigs in London it wasn’t long before he got in the mix in the Cardiff scene, putting on a number of fine bills full of gleefully noisy weirdos. Along with the other half of Cosmic Carnage Lindsey he just put on their 5th Smash it Out all dayer at the Windmill in London and he’s teamed up with Lesson No. 1 (also known as Noel Gardener of The Quietus) to put stages on at the inaugural Cardiff Psych & Noise Fest, this weekend’s Hub festival and will be putting on their first one day event together in December. We decided it was high time we caught up with him to ask what he makes of Cardiff after so long putting gigs on in London and what he’s got up his sleeve for the future.

I’m good ta. Currently sitting on a packed train from Paddington to Cardiff Central. Actually, I’m not good at all.

(((o))): What were your first impressions of the Cardiff scene after moving here from London?

I was pretty much blown away to be honest and I still am. The picture didn’t seem so bright initially; venues had shut and Womanby Street, which is the Cardiff music scene’s turf, was under threat. Same old story – noise complaints to the council, developers and all that shite. However there was a protest to Save Womanby Street and thousands of people showed up, the atmosphere was electric and it was clear the appetite for live music in Cardiff was an absolute force to be reckoned with. What’s great is that the council did a complete 180 and the future of the street is very bright. Power to the people!

In terms of great local bands I was pretty naïve thinking there weren’t many but there are fuck loads and they are awesome. South Wales seems to be a bit of a bubble so they rarely cross the Severn Bridge to play gigs. But they should!

However, great festivals happen in Cardiff like Cardiff Pysch and Noise Fest and Hub Fest which is this weekend. Luckily we were asked to pick bands for both with is just awesome. Big love to Liz and Grant for asking us to be involved. 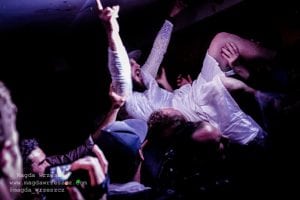 (((o))): How have you found promoting shows in Cardiff vs promoting them in London?

We have been so lucky in the fact that most of the gigs we have promoted have been free entry, so no stresses and strains about money. The Moon operates as a not-for-profit venue and puts up the cash to pay bands so I can just launch a Facebook event, nag some bloggers, put up posters, keep annoying everyone and turn up and get pissed. The gigs are generally very well attended because they’re free. We now have a regular crowd and all sorts of randoms walking in which is a great mix. We put on Frauds, John and Twisted Ankle just after Wales v Scotland in the rugby and there were dudes moshing in kilts. It was beautiful.

Compared to London, it feels pretty familiar. The first one we did was Luminous Bodies so there was obviously lots of crowdsurfing and spilled pints so it was like diving straight back into it. The Cardiff crowd are very active so it normally kicks off somehow.

The Moon has a similar vibe to the Windmill. Chilled, a bit grotty and full of drunken twats (especially me). I really miss our regular London crowd though, we’ve been doing it 5 years, our gigs had a real community feel and I miss all the regulars. I also miss Lindsey who is the other half of Cosmic Carnage, she’s in Glasgow doing a PHD in saving the world or something.

(((o))): What’s the best thing about the Cardiff scene right now? And what is it lacking?

The best thing I’d say is Noel Gardner from Lesson No.1. We’ve been putting the gigs on in collaboration with him, he’s got an encyclopaedic knowledge of the local music scene and the underground rock scene in general. He’s a great egg and has been vital in helping us set up in our new home.

The other best thing is the DIY vibes. Gigs happen in a rehearsal space out the back of a community centre where you can bring your own beers and watch things like people doing yoga with their dog in the main hall. We put on Zolle there, only about 10 people showed up but that fills the space really and it was an incredible evening. James from F H E D puts on excellent gigs in there too, he’s a total ledge. Tom from Astral Noize also puts gigs on in his living room. Those gigs are the absolute tits. Sometimes you think the floor might fall through and you might die but it’s all part of the fun. I discovered Chinsniffer at one of those gigs, the world needs to know about Chinsniffer.

In terms of what it lacks, bigger bands playing. If you’re above the level of Cosmic Carnage, it’s unlikely you’ll play Cardiff. I saw Weedeater this year but I think that’s about it. Bristol seems to swallow up all the bigger gigs and I’m hoping that will change. 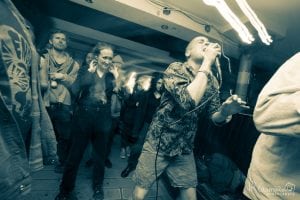 (((o))): Which bands should non-Welshies be looking out for?

Fuckloads! I’m just going to do a top 3 so I don’t rant for too long!

V A I L S – They could be massive given a little push, two piece grunty, punky, doom type thing. From Swansea. They are class.

Obey Cobra – They have not played Cosmic Carnage yet but we’re putting that right on September 1st when they play the Moon with Anthroprophh. It’s kinda dreamy psych stuff which is very powerful, they blew everyone away at Cardiff Psych and Noise Fest and there’s rumours one of my favourite labels is showing an interest. You did not hear that from me..

Bodyhacker – I think they’ve only played once and it was in Tom’s living room but wow, vicious punk rock that sent the room into a complete frenzy. They’ll be playing Hub Festival on Sunday alongside Bodies on Everest, Kong Lives, They Live We Sleep and Mammoth Weed Wizard Bastard.  It’s going to be fucking huge. They are also opening our All Day Christmas bash headlined by Big Lad.

(((o))): Who haven’t you put on in Cardiff yet that you’d most like to introduce the locals to? 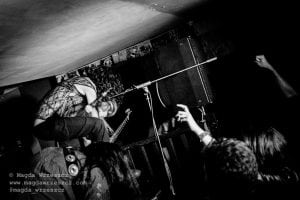 (((o))): What gigs have you got lined up at the moment? And how do you see 2019 panning out for Cosmic Carnage/Cardiff?

So this year we have:

Guest curators with Lesson No.1 at Hub Fest

Anthroprophh, Sunshine and Obey Cobra at The Moon. FREE ENTRY

Lovely Wife, Snakes Don’t Belong in Alaska and Made of Teeth at The Moon. FREE ENTRY

Snack Family, Pohl and Kaywoo at The Moon. FREE ENTRY

2019 is already looking ridiculous. We’ve booked a sort of all dayer thing, free entry on January 19th and the line-up is nothing short of bonkers.

In May we’ve organised a gig with a massive doom band, one of my favourites. The fact that it’s free entry is just fucking silly.

((o)) – Lastly: is it true you bullied Hey Colossus to get back on stage and do Hot Grave after they’d finished at The Moon one time?

Haha, yes. They finished the set without playing it (the cheeky pricks) and I was so pissed I grabbed the mic and forced them back on (the 4 Jägerbombs for tenner at the Moon are really moreish) The drummer, Rhys, was already outside having a fag and I had to physically pull him back in. I’m glad I did though; Tim left the band shortly after which means they don’t play it live any more. Maybe next time they play Cardiff they’ll let me sing it, that would make my decade (shameless).

The Hub festival takes place this August Bank holiday weekend over 3 days. Pop along for great music, great company and possible band bullying. Take a look at the Cosmic Carnage events page on Facebook for their complete calendar of events.